Black Caps continue to be to the fore in the English Twenty20 cricket competition. 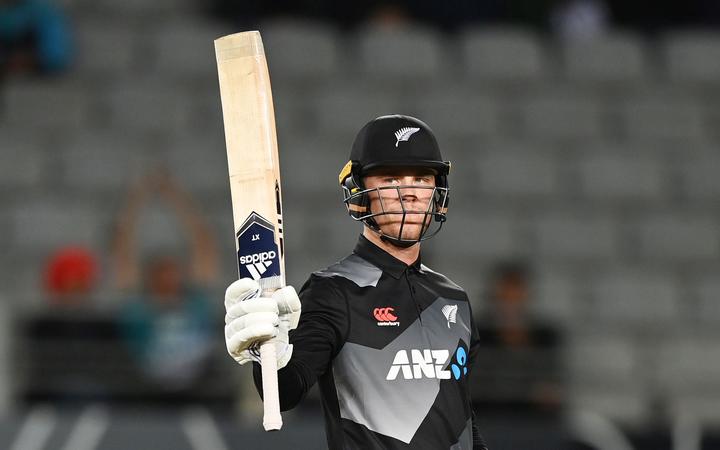 Finn Allen celebrates scoring a half century for the Black Caps in a Twenty20 international against Bangladesh. Photo: Photosport Ltd 2021

Young opener Finn Allen has produced a man of the match performance to lead Lancashire to an eight wicket win over Northamptonshire.

Allen has smashed 66 from 37 balls, blasting seven fours and three sixes, to help Lancashire chase down the 143 required for victory with 4.2 overs remaining.

Lancashire are now holding the fourth and final quarterfinal berth in the north group.

They are one place behind Worcestershire, who have beaten the Birmingham Bears by 49 runs thanks a telling contribution from Black Caps leg-spinner Ish Sodhi.

Sodhi has taken four wickets for 24 runs from his four overs as Worcestershire have rolled Birmingham for 125.

New Zealand fast bowler Adam Milne has also shone with the ball as south group leaders Kent have cruised to a nine-wicket victory against Surrey.

Milne took two wickets for just 13 runs to help Kent restrict Surrey to 128 for seven from their 20 overs.

Kent chased down the 129 required for victory with four and a half overs to spare.

Surrey were without their Black Caps fast bowler Kyle Jamieson, who has been ruled out of the remainder of the competition with a glute injury.

New Zealand batsman Glenn Phillips had a rare failure for Gloucestershire, scoring just two but they still beat Middlesex by 10 runs and sit third in the south group.

Phillips, who is the second-leading runscorer in the competition, took a contender for catch of the season, as Gloucestershire restricted Middlesex to 161 for eight.

There are two rounds remaining before next month's quarterfinals.