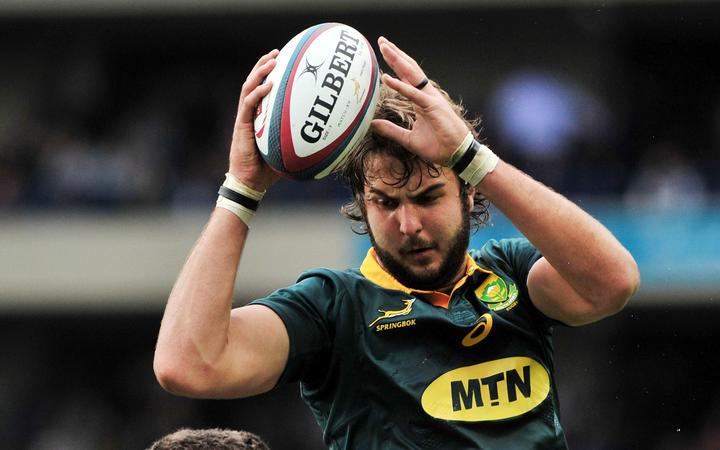 All the South Africa players are self isolating after close contact with De Jager and will remain cloistered in their hotel rooms until a new round of tests are conducted, SA Rugby said.

The second such incident in a week in the Springbok camp could force a cancellation of the second test, scheduled for Johannesburg's Ellis Park on Friday.

South Africa beat Georgia in Pretoria last Friday in their first warm-up game ahead of the three-test series against the Lions starting this month, which is going ahead despite a third wave of infections in the country and a severe lockdown imposed just over a week ago by President Cyril Ramaphosa.

"The players have been placed in preventative isolation prior to further PCR testing and a review of the testing data by the Medical Advisory Group," SA Rugby said in a statement.

"Lood de Jager returned a positive outcome in scheduled testing and, because of his close contact with a number of squad members, the entire group has gone into isolation.

"An update will be issued following the review by the MAG and the further testing,Gǥ it added.

There were three positive cases in the camp last week but Herschel Jantjies proved negative in a retest and played as a substitute in Friday's 40-9 win, which was the Springbok's first match in 20 months since winning the 2019 World Cup.

Winger Sbu Nkosi and prop Vincent Koch, however, went into self isolation, as did World Cup heroes Lukhanyo Am and Makazole Mapimpi, who were expected to play against Georgia.

Director of Rugby Rassie Erasmus said last week he was confident about safety protocols in the camp to prevent more COVID-19 positive cases as the team moved into a secure bio-bubble but Monday's case raises new concerns.

South Africa hit a record of 26,000 fresh COVID-19 cases on Saturday, its second record-breaking tally in as many days, as a rampant third wave of infections coursed through a largely unvaccinated population.

The rampant rise in infections in Africa's most industrialised nation has stretched health services to breaking point, with hospitals out of beds and medics to man them.