A double century to Devon Conway, a Black Caps collapse and an England fightback have made for an interesting second day of the opening cricket Test at Lord's.

England were 111 for two at stumps in reply to New Zealand's first innings of 378. 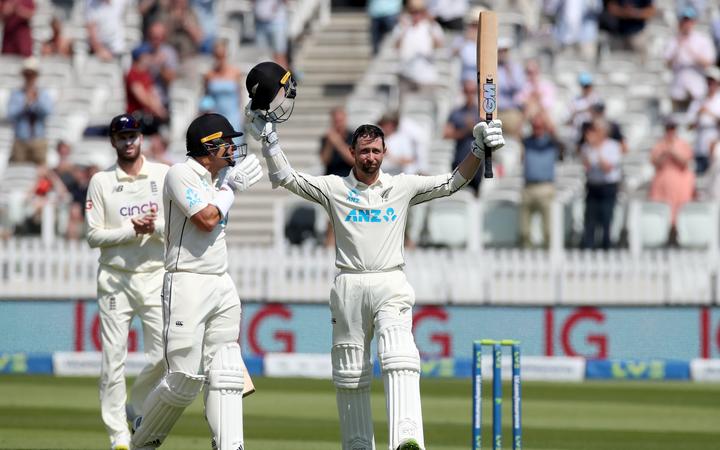 Conway, who set a record for the highest score on test debut at Lord's, was in danger of missing out on a double ton when New Zealand were nine down but he received support from number 11 Neil Wagner who frustrated England with 25 off 21 balls.

Conway became only the seventh batsman to score a double century on debut, reaching the milestone with a six over long leg, before he became the last wicket to fall when he was run out by mere millimetres.

Mathew Sinclair scored a double hundred on debut for New Zealand in 1999.

It has been a remarkable start to Conway's international career after becoming eligible for New Zealand in August last year.

The South African born 29 year old has scored 99 in a T20 international, ODI ton and now a double century on Test debut.

"He's banged out runs domestically for a number of years, bowling to him in the nets he works hard and is always asking questions, he's a keen learner and everyone is extremely proud and pleased for him," said Southee.

"He knows his game, he's played a lot of cricket, he's come in and just taken international cricket in his stride."

"Him and Kyle Jamieson, who has also had an incredible year, are two guys that ask a lot of questions and always wanting to learn."

Earlier, Conway's overnight partner Henry Nicholls was the first to be dismissed for 61 when a quick bouncer from Mark Wood caught him off guard, forcing him instinctively to hook the ball to Ollie Robinson at long leg. 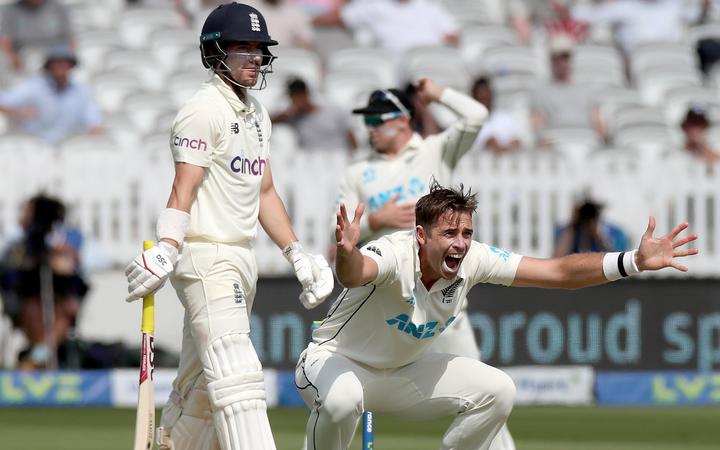 The breakthrough ended a patiently constructed 174-run partnership for the fourth wicket and brought BJ Watling to the crease but the wicketkeeper lasted only six deliveries, edging Wood to Dom Sibley in the slips.

All-rounders Colin de Grandhomme and Mitchell Santner departed without troubling the scorers while Kyle Jamieson was dismissed when a hooked shot was caught smartly by Zak Crawley in the deep after he sprinted in from the boundary.

Robinson nearly got his name on the Lord's honours board with a fifth wicket but a lofted drive from Tim Southee was dropped by Stuart Broad at mid off. The New Zealand bowler was later caught behind off James Anderson.

In reply England were in trouble early losing Dom Sibley trapped lbw by Kyle Jamieson in the third over without scoring , while three overs later Zak Crawley was caught behind off Tim Southee for two.

England were 18 for two.

However captain Joe Root and Rory Burns got the homeside through to 111-2 at stumps with Root on 42 and Burns on 59.

Southee says the wicket is still good for bowling.

"The day showed that if you do break partnerships it's not easy to start so we know we've got to keep chipping away at wickets."