Opinion - Naomi Osaka could be onto something here. The decision by the four-time tennis grand slam champion to skip post-match press conferences at the upcoming French Open ought to be applauded. 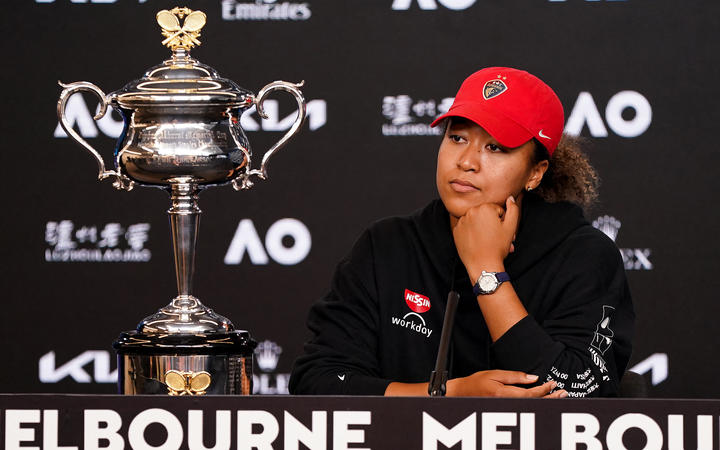 Naomi Osaka speaks at a press conference after winning her women's singles final match on day 13 of the Australian Open tennis tournament in Melbourne on February 20, 2021. Photo: AFP / Natasha Morello

Osaka cited mental health as being among her reasons for opting out of the obligation of fronting the microphones and cameras, believing the whole process provided an opportunity for "kicking a person while they're down.''

The last thing a defeated player wants, Osaka said, is to front these media interrogations and she was no longer prepared to "subject'' herself to the ordeal.

I absolutely respect that view and would be surprised if many athletes in any code disagreed with the world No.2. But let me go a step further and say it's not only the mental health of sportsmen and women that would be improved by such a boycott.

My interest in hearing from athletes is pretty much nil.

I abhor these manufactured and stilted set-pieces. They are absolutely beyond awkward, as you squirm in your seat.

Athletes hate the media and often rightly so. Just as the media dislikes many athletes too.

Doing away with the whole thing can only make everyone's life better.

Players and coaches offer little insight and regularly let their disdain for the would-be questioners show. Sighs and eye-rolls are the least of it sometimes, given the way some people sitting at the microphones openly talk of the contempt they have for you.

Let's lift the veil a little bit here and provide some local context for what Osaka is talking about.

There are sports in New Zealand who relish media coverage and are happy to make players and coaches available to you. Often you'll get to interview them one-on-one, which makes for a far less adversarial experience.

Requests are taken and then the player you've asked for will put a smile on their face and at least try and speak to you in a civil fashion.

Rugby is a different matter, though. In rugby you'll get what you're given and, if you don't like that, then you'll get no-one.

Rugby prefers a press conference or an "all in,'' during which media types surround the person the team has rolled out. No matter how bad a talker or how irrelevant to the situation, this is the player who's been "put up'' and that's that.

In my experience, other sports - such as cricket and football - have done similar, without any right to.

Rugby is big here and rugby is doing you the favour. You need the content and they are prepared - albeit grudgingly - to provide it.

Frankly, the media are the ones doing some of these other codes the favour and should be rewarded accordingly.

But I digress. This is about press conferences.

An All Blacks press conference is excruciating. In my time, if then-head coach Steve Hansen wasn't talking that day, then they were pointless too.

There's a hierarchy at play. Certain people get to ask their questions first and set the day's agenda. If things take a turn that those at the top of the media food chain don't care for, then the sighs and eye rolling aren't restricted to those sat at the podium.

You're expected to bow and scrape at the player's feet, no matter how many times they mention that they don't read the media and don't respect any of the opinions expressed. You just laugh nervously and try to summon the strength to stammer out the next question.

If you're unlucky, you'll also be taken aside afterwards and told off for your line of questioning or for something you had published that morning.

There are days when you're left utterly drained and humiliated. Worse still, there remains great chunks of audio to be transcribed and straw to be spun into gold.

This is where Osaka could be onto something.

We know players don't want to do these press conferences and, in my experience, the media can't stand them either.

Who would lose out if these things went by the wayside?

Fans? I genuinely don't know. Are they captivated by players' press conference quips? Would their connection to, say, the All Blacks be diminished by not reading about who's rooming with who this week and who had to shout the coffees after the obligatory game of golf?

Don't know about you, but I'm happy just to get that kind of insight via a press release or a players' social media feed. Spare me the stress of a press conference.

Gone are the days when an opportunity existed for the Fourth Estate to potentially hold the great and the good to account. To glean the answers the public demanded and to be told the honest, unvarnished truth.

Press conferences are an ordeal for everyone so let's do away with them.