In statement released by the chair of Auckland Rugby Stu Mather on behalf of the unions, Mather reaffirmed their support of the $390 million deal for Silver Lake to buy a 12 and half pecent stake in game here which has led to a bitter dispute with the Players Association.

The comments come in the wake of the Players Association proposing an alternative deal to Silver Lake, that would involve a public share float of five percent of NZR's commercial revenue and which investment company Forsyth Barr suggests could raise $190 million.

"The Provincial Unions have been supportive of NZR exploring all options to ensure the games long term financial viability, including an Initial Public Offering (IPO) option," said Mather. 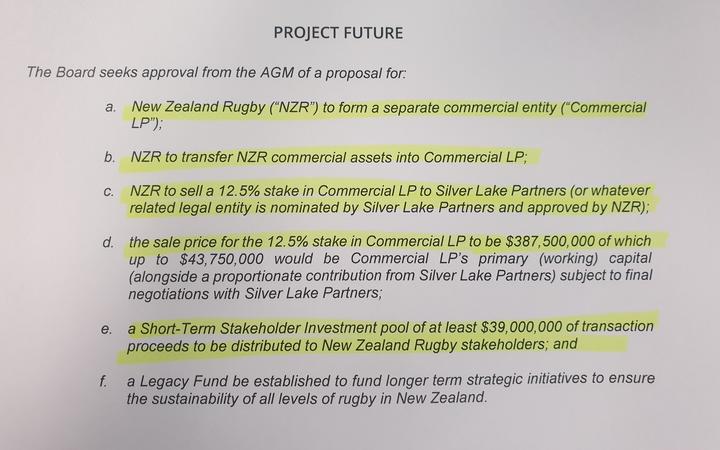 "The proposed Silver Lake deal stood out as it meets all of the objectives; strategic capability, enhances growth and takes advantage of global revenue opportunities, helps build a legacy for rugby with the establishment of a Legacy Fund that will grow to over $200m in the next couple of years, boosts NZR reserves through a cash injection, and provides a funding distribution to stakeholders."

Mather said the provinces had accounting firm PWC carry out an independent review of the Silver Lake proposal in March - before they voted unanimously in favour of it at the NZR's recent AGM.

"At the request of the Provincial Unions, an Independent Review was conducted by PWC and a comprehensive document presented at a workshop held in March to present on its findings. The Proposed Transaction Document was also reviewed by Simpson Grierson prior to the AGM."

"NZR ran a robust consultation process prior to the vote at the AGM which spanned a number of months, with considerable information provided during due diligence."