Sailor Andy Maloney has won his first world title and moved closer to securing an Olympic berth with victory in the Finn Gold Cup in Porto. 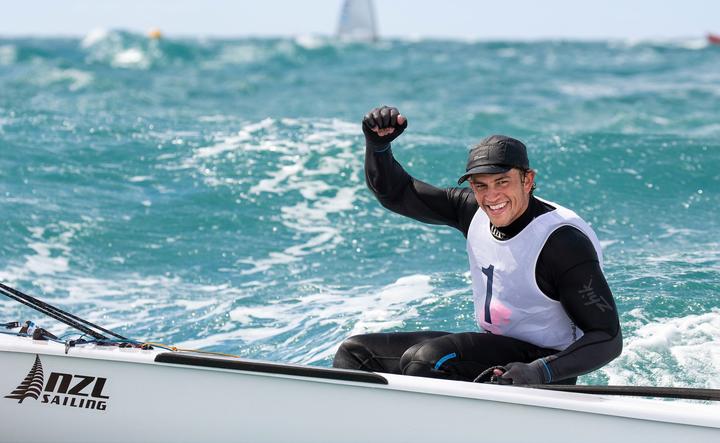 Maloney became the second Kiwi in 18 months to get his hands on the prestigious trophy after he entered the final day of the regatta with a five-point lead but banked three solid scores today to win.

The New Zealand Olympic selectors now have a very difficult decision to make with only one of the sailors able to compete at the Tokyo Games.

The other will still travel to Japan and support the sailor chosen as their coach.

Maloney finished seven points ahead of Spain's Joan Cardona, with Junior a further three points back, but there was some controversy afterwards with a protest against Cardona for his tactics in the final race of the regatta.

It didn't make much difference to Maloney, who savoured his regatta win.

"Going down the final run [of the last race], there was a lot of difference between me and the guys who could overtake me on the results," Maloney said.

"I felt pretty good at that stage but nothing is done in yachting so I just tried to get to the finish as best I could and just let it all out when I crossed the line."

Neither Maloney or Junior knew how they would go this week, especially as they've spent little time in the Finn over the last 18 months because of their America's Cup commitments and the interruptions caused by Covid-19.

Their last regatta in the heavyweight dinghy was the 2019 Finn Gold Cup in Melbourne and they were up against a high quality fleet in the final stages of Olympic preparations.

But it clearly came back to them quickly, and they both banked a series of consistently low scores across the nine races.

"We knew it was going to be challenging but we had a lot of good notes and believed in what we do," Junior said.

"We knew that if we sailed well we could do it and I think we did that so we're really happy with the outcome.

"It's bloody awesome to be on the podium again. It's pretty special to be in the top three at the world championships but I'm just over the moon for Andy. To keep the Gold Cup in New Zealand is something special. I'm super-stoked for him."

Maloney and Junior will stay in Portugal to continue their buildup to the Olympics before heading to Italy for the next round of the SailGP.