Earlier this month, Extreme E kicked off in Saudi Arabia - the first race of an all-electric rally car series that aims to highlight environmental damage and climate change. 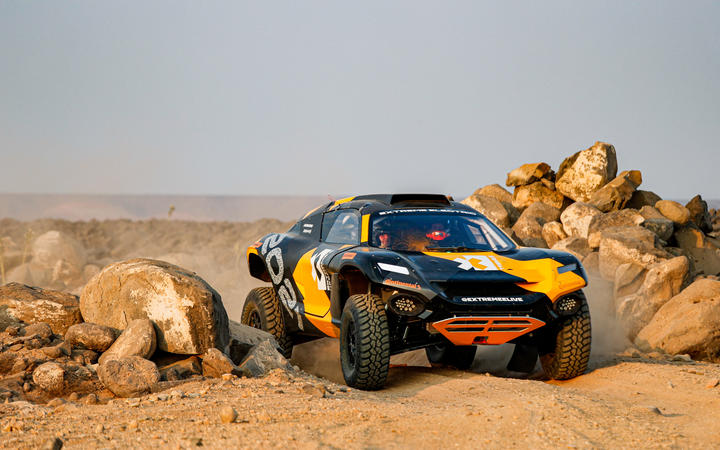 The Extreme E Odyssey 21 electric rally car on a trial outing at the Dakar Rally early in 2020. Photo: AFP

On the track, Formula E - an all-electric street race series - is well established and is in its seventh season.

In fact, New Zealander Mitchell Evans is currently second in the driver standings.

Even Formula 1 champion Lewis Hamilton is trying to be more environmentally friendly. "Plant based", his Instagram profile reads - he's been a vegan since 2017. He drives an electric car and sold his private jet.

They're all examples of the motorsport industry embracing electric cars, something that seems will become much more common in the near future.

Back here in New Zealand, driver Hayden Paddon has recently been showcasing his own EV rally car, one developed in Aotearoa with the aim of taking on the more conventionally powered cars in the World Rally Championship.

"We launched a few months ago so we've been going through the development phase and we've got few demonstrations … just trying to up the ante on how much we get the car out there," Paddon says.

The car is a Hyundai Kona EV that Paddon says is already faster than his combustion car out of the box. 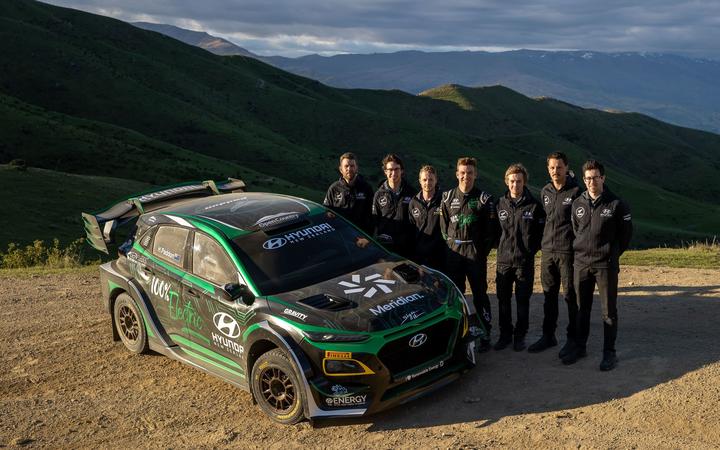 "The more we're using it the more data we're collecting … we're probably still about 12 months off being able to officially compete."

Paddon says the motorsports industry is changing - and fast.

He believes that in a decade, a large chunk of racing will be done in electric cars.

"When you look at the future of the sport and where the automotive industry is going, it's clear things are changing and rally has almost somewhat been left in the dark and I see there's an opportunity for our team, a small Kiwi team on the other side of the world, to actually get a bit of a jump start and start utlitising that technology now...

"In our sport we're in the business of going fast. I just want to go fast, and the capabilities of the technology gives us so much potential.

"Ultimately, that's what motorsport is all about isn't it? Engineering cars to go as fast as possible, and we've got a whole new window of opportunity with this car."

It's taken a fair bit of work already - from the first idea in 2017, through planning and 10,000 hours of designing and building.

Eventually, the bulk of motorsport will move to EVs, he says.

"Whether we like it or not, that's where it's going. You've got car manufacturers saying that they will cease production of combustion cars. All car manufacturers are moving towards alternative energy whether its electric, hydrogen or hybrid.

"I would suggest motorsport will be dominated by alternative energy. I think (in) 10 years. It's going to happen very quickly. It's already happened very quickly in the past two years.

"When the idea of an EV rally car was originally put to me in 2017, I laughed at the idea and now three and a half years later we've actually got a car that's running and something we're very positive about.

"The technology and the industry is changing scarily fast at the moment.

Asked if there was external pressure on motorsport as a result of growing awareness of climate change, Paddon said: "I think that's not just motorsport, I think that's all business, all commercial entities".

But there would always be a place for racing using combustion engines, he said.

"Definitely globally it's a trend... From a national point of view we recognise it's the way things are going to go slowly."

While Paddon had been the most vocal about his EV, there are "multiple other guys around the country who have got electric vehicles that they are building to run in competition", Goonan says.

They are mainly building for "club sport" - grass roots racing, but MotorSport NZ is working on a set of regulations to manage EV racing.

"As with EVs in general, particularly when they are being used at high levels there are controls around the environment. I suppose it's the event safety is the best way to describe it. We've all seen those stories of Tesla's catching alight on the highways in the US and stuff like that.

"So we're just getting to the point of making sure we have some guidelines, regulations for our clubs who want to run events with EVs in them so they have an idea of what safety protocols have to be in place." 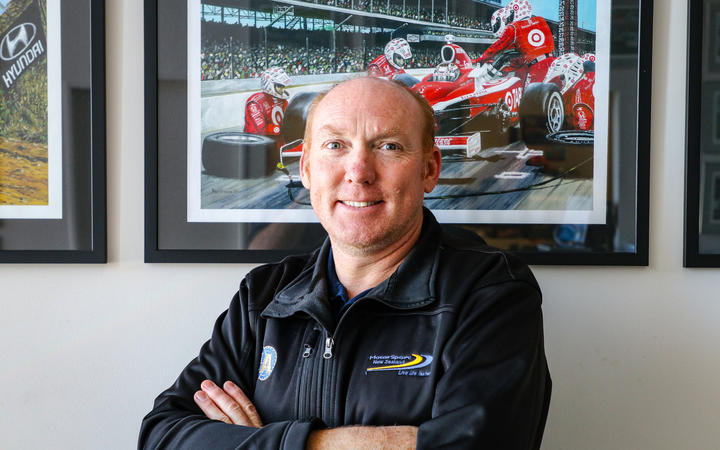 Goonan thinks we'll start to see EVs in national-level racing over the next five years - as long as technology improves.

He talks about battery range, for example.

"The batteries need a lot of work… and like New Zealand as a whole, infrastructure around charging the vehicles needs to be set up at the venues as well. So it's not just a matter of saying 'Ok we're going to have a Nissan Leaf race series'. There's a whole lot of other factors we need to get in place first."

While the idea of Nissan Leafs zooming around a racetrack might be a bit funny, Goonan said the same was thought when Formula E started about seven or eight years ago.

"It was all these electric rollerskates running around but now you look at it. They've got a massive image and all the major manufacturers involved so it's definitely the way forward.

"But at national and grass roots level in New Zealand it's not going to be an overnight sensation, it's going to be a long-term project."

While there's an element of attachment to combustion engines that may slow the transition to EVs down, Goonan says motorsports are always looking to stay ahead of the curve.

"It's phenomenal what these battery-powered cars can do and the performance levels they have got. The holdback for them at the moment is purely the duration the batteries can run for and then the recharging of them.

"Once we can get over that they're going to be as fast if not faster than most competition cars out there."

That doesn't live up to most perceptions of EVs, but Goonan says it's just part of the evolution of cars.

While a lot of the shift to EVs appears to be driven by a thirst for performance and speed, climate change concerns play a part too.

"We are not getting direct pressure - we recognise that motorsport is seen as a dirty sport because of the perceived carbon that we produce."

MotorSport NZ has realised it needs to do something about those perceptions, Goonan says - at least starting to neutralise the emissions it makes.

"We've started a sustainability fund which our member clubs can contribute to. We've got a vision, hopefully within the next six to 12 months to create effectively a fee option like you do with Air New Zealand when you can go in and purchase a couple of bucks worth of carbon credits when you pay for your ticket."

In fact, the first emissions neutral race is on this weekend - the Otago Rally. The rally will offset all competitor carbon emissions.

Event organiser Roger Oakley says in a statement: "We're proud to support this important MotorSport New Zealand initiative and we hope to lead other events towards contributing to the scheme.

"We all have a role to play in creating a more environmentally sustainable New Zealand and this is an important step from the motorsport community."