A Jona Nareki hat-trick sparked the Highlanders to a 39-23 Super Rugby Aotearoa win over the Chiefs at Waikato Stadium in Hamilton. 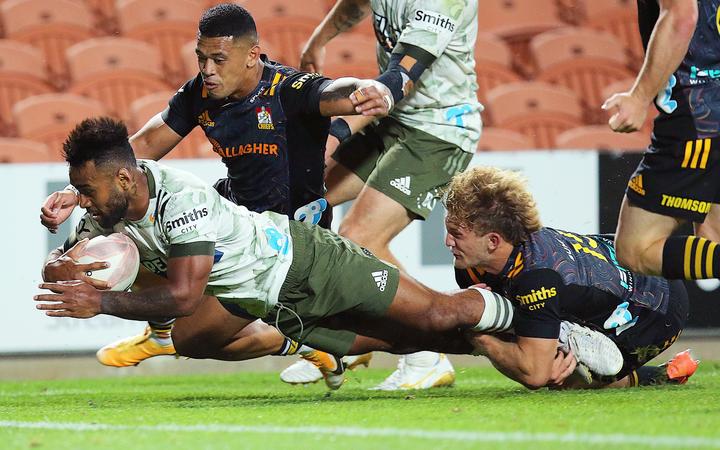 After twice being reduced to 14 men, and struggling for momentum in the first half, the Highlanders looked in trouble as the home team took a 20-11 lead into halftime.

But the Chiefs' organisation on defence proved too haphazard in the second spell, and Nareki was in punishing form.

The two teams had exchanged early penalties in a cautious start, Damian McKenzie sinking two for the Chiefs while Josh Ioane kept the Highlanders in touch with one.

But the Chiefs looked to have taken control after 20 minutes, capitalising after Highlanders second five-eighth Sio Tomkinson was sin-binned for infringing at the breakdown.

Strong running from Anton Lienert Brown, and quick ball from the breakdown meant Luke Jacobson was perfectly placed to crash over for the first try of the game.

With the Highlanders still a man down, McKenzie dived over from a 10m scrum and extended their lead to 20-6 at the half-hour mark.

Three minutes later, and despite losing hooker Ash Dixon to the sinbin, the Highlanders hauled one back when a Bryn Gatland chip kick was charged down and Nareki raced 90m for the try.

Leading 20-11 halftime, the Chiefs were hit with a triple blow soon after the restart. First halfback Folau Fakatava then flanker Shannon Frizzell and finally Nareki scored within the space of five minutes to give the visitors a 32-20 lead after 55 minutes.

McKenzie added another penalty in ther 66th minute to reduce the margin slightly, but Nareki cantered across four minutes later for his third try to put the game out of reach.