American Magic's boat Patriot is back in the water for the first time since capsizing in its America's Cup challenger series race against Luna Rossa ten days ago.

Patriot has undergone a major rebuild after the capsize, which left it with a large hole in its side, with the syndicate also having to replace much of the electrical gear.

It sat in a cradle in front of the team's boat shed for inspection before being lifted by a crane into the water just after 11am. 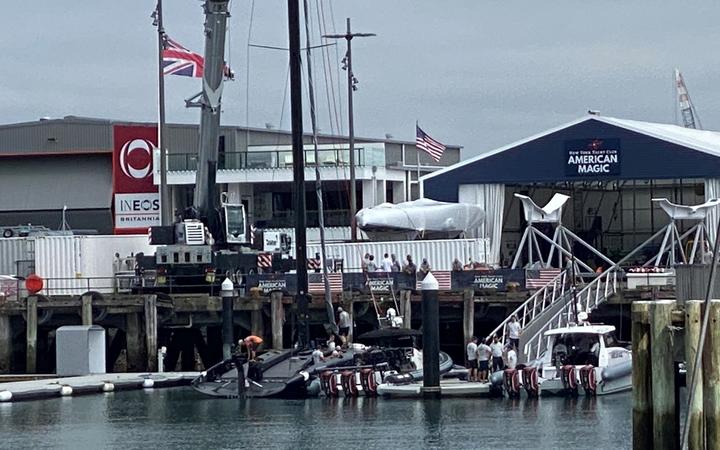 Patriot returns to the water in Auckland. Photo: RNZ

Both American Magic and Italy's Luna Rossa have to declare to America's Cup officials which hull, foils, rudder and mast tube they will use in this weekend's Challenger Series semifinals.

The best of seven series is due to start on Friday with two races, followed by two more on Saturday and Sunday and then one on Tuesday if needed.

The winner will then race against Team UK to decide who will advance to challenger Team New Zealand for the America's Cup. 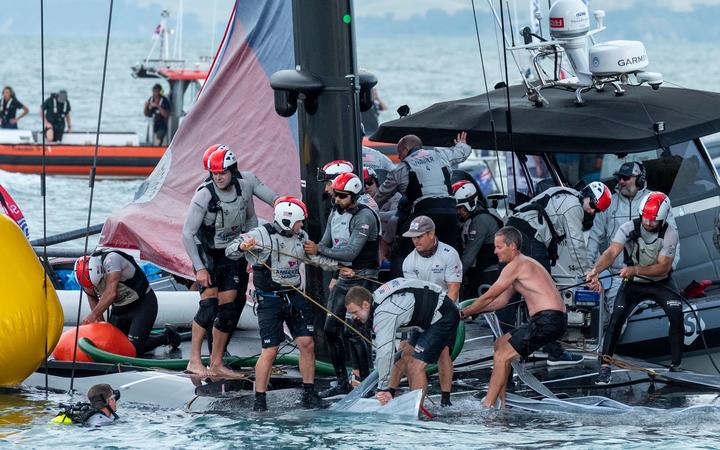 Crews work to recover Patriot after it capsized. Photo: PHOTOSPORT

American Magic paid tribute to the other syndicates for their help in getting Patriot back on the water.

A large "thank you" sticker was plastered on the side of the boat replicating sticking plasters over a wound and and included the New Zealand, Union Jack and Italian flags.

Patriot spent nearly seven hours on the water on Wednesday, and encountered very light wind early on in the session.

When the anticipated stronger breeze arrived in the late afternoon, PATRIOT completed several laps of the inner harbour and conducted drills near Rangitoto Island.

When asked if the yacht felt the same, Hutchinson's answer was succinct. "45 knots. So yes, it did."

Hutchinson also noted that while the boat felt good, speed is not the team's true measure of success.

"Our measure is the scorecard. We know that we have to go out and have some good races over the weekend."

"We've just got to back ourselves, trust ourselves and do what we would've done normally," said 8-time America's Cup veteran Sean Clarkson, one of the team's grinders and the reserve main trimmer.

"We've got a great boat, a great crew. We've just got to do it. We're very fortunate, very grateful to the shore crew, the design team and the general public. They're behind us and they got us here."