American Magic struggled while Team UK continued their winning ways in shifty wind conditions on the second day of sailing in the America's Cup Challenger Selection Series in Auckland. 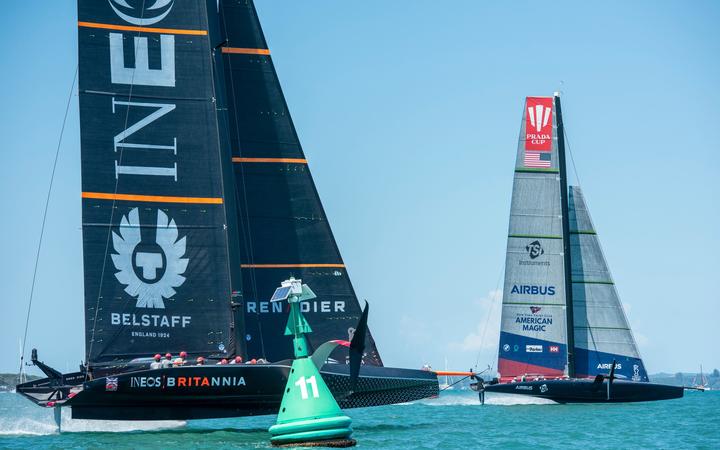 Saturday's two races were shortened to four legs due to wind conditions that saw racing taking place at slower speeds and often not on foils.

American Magic had two races and were a long way behind their opponents on both occasions.

After a delayed start to the second race of the day, as the race committee moved the course, Team UK showed they could back up their success of day one.

From the start Team UK took a big lead over the Americans and never gave it up.

While the British were able to get on their foils early, American Magic could not generate the same speed and were left to watch the gap between the boats quickly increase.

However, it was not all plain sailing for Team UK who also spent time off their foils and moving slowly with boat speeds dropping to 4 to 8 knots.

Having inched their way down leg 2 Team UK were the first to get onto their foils, but it was a brief moment. One gybe and they were back in displacement mode.

As they did so American Magic had found some breeze and were back up on their foils, closing the distance on the leaders. But it was not enough, as Team UK had found a slither of breeze too and were sailing at over 30 knots, enough to get them down to gate 2 as they rounded the right hand mark.

The next lap of the course was tense for the race leaders in trying to avoid the flat patches and ignore the moments when American Magic was reeling in the distance.

As the British approached gate 3 for the final leg, all eyes were on the clock and whether or not they would complete the race in the allocated 45 minutes.

However with seven minutes left before the time limit expired Team UK found the breeze and got back up to speed and crossed the finish line with two minutes to spare to take their third race win from three starts.

The pre-race started slowly with both boats falling off their foils in the light winds in the starting box.

At the start, the Italians crossed the line at speed on starboard leaving the Americans still struggling for speed coming in on port.

In the patchy conditions boat speeds did reach around 27 to 28 knots on the first upwind leg, but this pace was not maintained.

As the breeze dropped to around 8 knots Luna Rossa were having trouble getting down leg 2. In their attempt to create sufficient boat speed to get onto the foils they were forced to sail so high that they were sailing across the course rather than down it.

In a change in fortunes American Magic managed to get into some breeze, get up to speed and haul back the massive distance deficit to catch and then overtake the Italians.

But once again, the patchy breeze saw another lead change.

Luna Rossa got back up to speed to sail away from American Magic once again. and passed through gate 2 in the lead.

From here, American Magic never got close enough to overtake the Italians.

Luna Rossa crossed the finish line and American Magic recorded a Did Not Finish.

The win gave Luna Rossa their first competition point of the regatta. 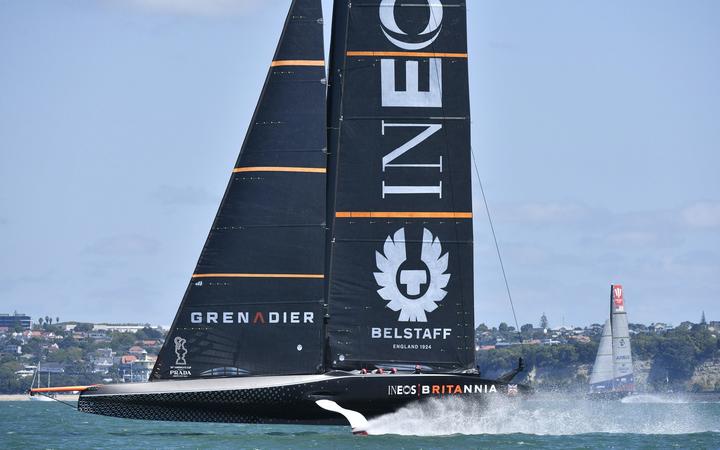 Ineos Team UK up and foiling on day one of the America's Cup Challenger Series. Photo: Photosport/Chris Cameron

Team UK were found to have broken the AC75 class rule on the opening day of racing, however their two race wins from Friday still stand.

After two days of racing in the round robin series, Team UK lead the standings with three points followed by Luna Rossa on one point and American Magic yet to win a race.

On Sunday, Luna Rossa race against Team UK and then American Magic with racing scheduled to start at 3.15pm.