The rugby world is paying tribute to Phil Kingsley Jones, who died yesterday at the age of 72 after battling ill health. 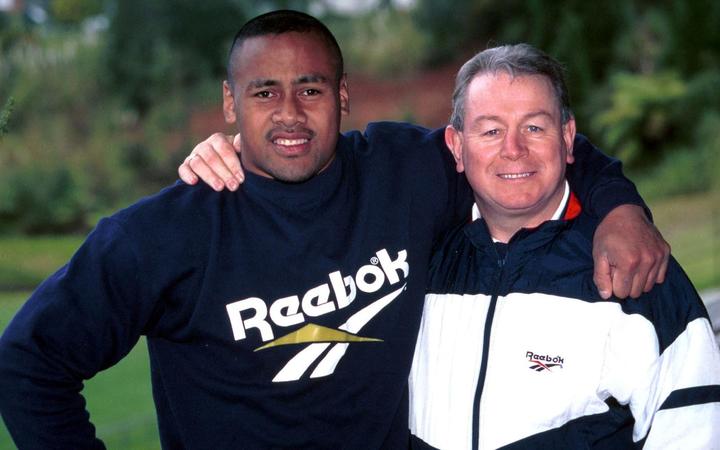 The proud Welshman was the former manager of All Black great Jonah Lomu and was ambassador for the Counties Manukau Rugby Union.

Jones was an integral part of the revival of Counties Rugby and helped the Steelers to win the provincial second tier Championship title in 2012 and take the Ranfurly Shield from Hawkes Bay in 2013.

"This is a truly sad day for Counties Manukau and rugby. Phil would be one of the only people who could walk into any rugby club in the world and know someone who would want to buy him a beer. His larger than life personality, sharp brain and ability to think outside the square was a great gift.

"What he did for Jonah Lomu was ground-breaking. He was the pioneer who turned Jonah into rugby's first global superstar all while keeping him grounded and connected to what was important, which was our region.

"Such was the impact that many of the young ones coming through today still look up to him and are aware of Jonah's legacy," Brain said.

Jones was also a player agent and even though he is best known for managing and mentoring the world's biggest rugby star and Counties Manukau legend Jonah Lomu.

Known as an award-winning entertainer and comedian, Phil performed at the London Palladium, appeared on the UK talent show New Faces and was the MC at Butlins.

"Phil truly loved this Union and we loved him right back," Lawton said.

"Even during the last fortnight when his health was deteriorating, he was working the phones like the good old days to try and land us new sponsors.

"We are really devastated by the loss of such a huge character and our condolences go out to his family and friends.

"The Steelers will be honouring a true legend when they take the field on Sunday against Hawke's Bay in Napier."

Phil is survived by his wife Verina, his three children - Kingsley, Vikki, Rhianon - their partners and his ten grandchildren and seven great grandchildren.

His son, a former Wales captain, confirmed the news from his home in British Columbia where he runs the Canada national team.

"Dad died peacefully in his sleep with his wife, Verina, and daughters Vikki and Rhianon at his bedside," Jones, junior, said.

"He had been in declining health since falling at home a few months ago. "We shall forever remember him as a man who lived life to the full and for all those lucky enough to have known him, he made the world a better place.

"A comedian, coach and mentor to one of the greatest rugby players the world has ever seen, dad was first and foremost a husband, father, grandfather, great-grandfather and brother.

"We are all so very proud of his achievements, not least his massive influence on Counties Manukua rugby over a period of more than 30 years. He will be sorely missed by his family and countless friends