A year ago to the day, Brook Macdonald broke his back.

The New Zealand downhill mountain biker suffered the worst crash of his career and lay semi-paralysed on the side of a Canadian mountain.

But testament to the strength and determination of the man they call "Bulldog", MacDonald has just left New Zealand for Austria, with plans to compete at October's World Champs.

"It has been a surreal year and my recovery has gone as well as it could. I can't wait to hook up with my team-mates and ride and race bikes again," he said. 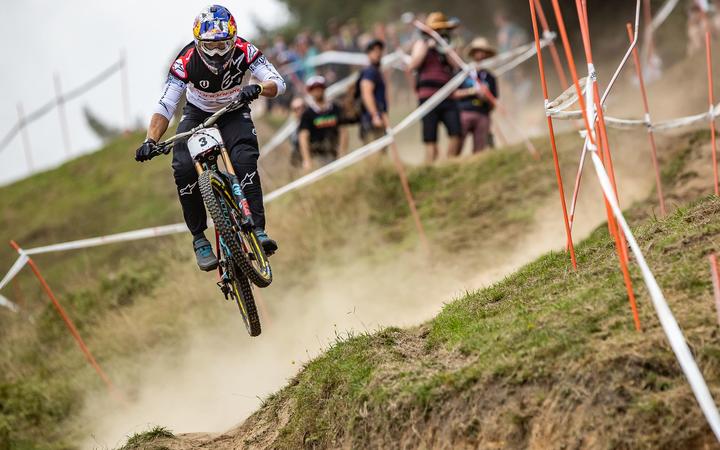 MacDonald is pumped to be back, but his mood was much darker the day his career almost ended.

Feeling confident after qualifying third fastest for last year's World Champs in Mont Saint Anne, he needed just a couple of practice runs before the race.

But he never made it to the bottom of the trail, hitting an exposed root on a rock slab that sent him off line and over the handlebars.

"I landed straight on my back and bounced about a metre into a ditch. I went to roll over and and I couldn't move or feel my legs.

"I knew straight away there was something seriously wrong. I don't remember too much becase I was in so much shock but I was wanting to get off the hill as soon as possible."

Today marks 1 year since my life changed. Let me tell you this journey I’ve faced I’ve enjoyed because I’ve learnt so much in a year about my body, retraining the brain and learning to walk again was probably the best thing I’ve ever conquered in life. I never prepared for the worst because I knew in my head that I was going to walk again and from day 1 I set goals I achieved them and so on. This day was the worst day of my life the experience I went through from laying on a hill for 4 hours not knowing how serious my injury was to spending 2 weeks in a hospital not showering for 20 days and taking a 4 hour ambulance ride to the airport for a 30 hour plus flight home.

Semi-paralysed and in extreme pain, race officials tried to take MacDonald off the mountain on the back of a quad bike.

He lay suffering for almost five hours before a helicopter finally arrived.

"It was probably the worst day of my life, lying there and not knowing what was going on.

"I was in a lot of pain and the medication they were given me was pretty light and wasn't really doing anything for the pain. I was in agony for quite a long time."

Carrying on from my last post i got off a plane and straight into 4 weeks of rehab. This was the biggest 4 weeks of my life and the steps I made were big, my goal was to leave here been able to walk unassisted and I achieved that, I worked my ass off twice a day to get to this point. I can’t thank my physio Quinn enough for the endless amount of laughs and hard work she put into me. I thank you from the bottom of my heart ❤️

He had surgery and spent three weeks in hospital in Quebec before being flown to Burwood Spinal Unit in Christchurch, where he had to learn to walk again.

Despite being told his riding days might never be over, MacDonald wasn't content to just get back on the pedals, he wanted to race again too.

It’s so crazy to look back to my first time walking and 2 months later. @madorla

MacDonald knew he'd be back on the bike, but recovering from a serious back injury and being back racing in just a year has exceeded even his expectations.

He says he's one of the few international athletes to have benefited from the coronavirus pandemic.

"It's been a blessing in disguise for me. It's given me more time to recover and strengthen things that I was weak in and work on stuff that I needed to work on. I've been pretty lucky."

Back riding down hills as fast as ever, Bulldog says his passion for bikes grew deeper during his rehab.

"I feel like I've found a new love for riding. Having such a big accident, that could have taken it all away from me, made me realise how much I enjoy riding my bike, whether it's racing or just riding with friends."

MacDonald plans on making this year's World Champs, scheduled for Austria in October, his first race since breaking his back at the same event in 2019.

Week 2 on the DH bike and man it feels good to be getting comfortable again. @goproanz @chazmak1 #gopro #goproanz

So will the Hawkes Bay hucker have any second thoughts as he points his bike down the steep chutes of the Leogang track.

"I'd rather be riding my bike and die than live in fear. You never know what could happen, could cross the street and get hit by a car and killed. After my crash it made me realise how important life is and how fast it can change. You can't just sit on the couch and watch TV all day and night, that's not living."

Riding bikes down mountains at breakneck speed might not be everyone's idea of living, but for MacDonald, nothing else comes close.