By Ashley Stanley for LockerRoom

Judoka-turned-wrestler Ana Moceyawa's life has been an intrepid journey around the globe - from Fiji to Berlin, the Gold Coast and Morocco - with the next stop, she hopes, Tokyo 2021. 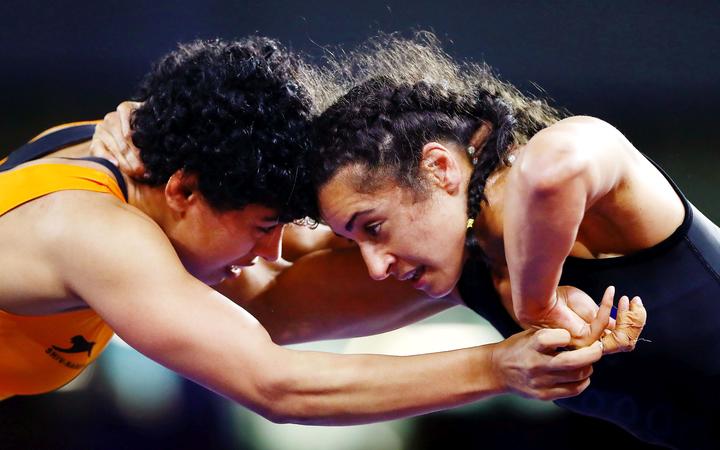 More often than not, female athletes have a range of accomplishments alongside their sporting endeavours. Ana Moceyawa is a prime example.

The 30-year-old has been a New Zealand champion in three different codes - judo, wrestling and grappling. But her unique experiences don't stop there.

Kiwi-born Moceyawa spent some of her childhood in the Yasawa Islands in Fiji with her dad's family. She then moved to Germany for most of her teenage years to hone her judo skills at a Berlin training school dedicated to the martial art.

On her return home to New Zealand, she took up wrestling to help a friend who needed a training partner in the lead-up to the 2014 Commonwealth Games. That decision eventually led Moceyawa to represent New Zealand in her new sport at her first Commonwealth Games on the Gold Coast four years later.

But that's not all. Earlier this year she built a home-made dojo and bunkered in during Level 4 lockdown with another friend - this time, a MMA world champion - to weather a global pandemic and keep in competitive shape.

And if that wasn't enough, she's funding her own way trying to qualify for next year's Tokyo Olympics with her day job - making fishing kayaks.

Moceyawa is the true definition of making the most of all the opportunities scrambled on the mat.

Her love of combat sports began when the 10-year-old Fijian-New Zealander saw a friend dressed in judogi (traditional judo uniform).

"I was like, 'you look really cool, what do you do?' and she said judo. I thought it was the coolest thing in the world," says Moceyawa.

She managed to convince her friend to let her attend judo classes, and in no time Moceyawa was captivated.

"I had never seen anything like it and from there I thought: 'I have to do this. I want to be the best at this sport'," she says.

Twenty years later and the code-hopper is bidding for a spot on the New Zealand team for the Tokyo Olympics, but in wrestling.

As some of you might know I have arrived in Morocco with the head coach @pourilane and have been training with some amazing wrestlers which I am very grateful for! Unfortunately the Olympic qualifier that was going to take place next week has been cancelled due to the Corona virus. This is completely out of our control and all I can do is focus on the things I can control. I am keeping a positive mind and will continue training as there will be another chance to hopefully qualify. Thankyou everybody who has been supporting me. Just trying to stay positive at this point in time xoxo

It could've been a different story in a 'sliding door' moment when Moceyawa first started judo.

"We didn't grow up with a lot of money. Mum worked night shifts and Dad worked a lot of hours, and like most island families we sent money back to Fiji," Moceyawa says.

"One day, they told me I had to pay to go [to judo] so I just said straight away, 'oh nah, I can't do it anymore' and one of the coaches heard me, and was like 'no, you have to keep going, I'll pay for you'.

"I didn't really understand back then, but now I look back and think if he didn't do that for me, I would've probably just gone back home and who knows what would've happened."

As her colourful life experiences show, many opportunities have been taken up by the strong-willed athlete ever since.

And she wants to make sure others can have the same opportunities. Moceyawa is driven to win medals so she can use her credentials to open up choices for those who experience similar situations.

She would also love to transition into coaching after competing, and return to Fiji to introduce wrestling, especially to females.

"I would love to help New Zealand grow the sport here too, but I'm thinking of the opportunities it could open up over there," Moceyawa says. "I feel like I could go over with the understanding and respect of the culture and maybe set up a programme or scholarship. It opened doors for me so I can only imagine how it would impact people there."

Moceyawa stumbled into wrestling after a friend, 2014 Commonwealth Games bronze medallist Tayla Ford, asked her to be a training partner in the lead up to those games in Glasgow.

She was hesitant at first, explaining to Ford she hadn't done wrestling before. But it didn't take long for Moceyawa to thrive off the challenge a new sport provided. So, she decided to move from Christchurch to Tauranga to pursue more wrestling opportunities.

"I think once I get obsessed with something, in my brain, I'm like 'I have to do the best that I can'," says Moceyawa, who still maintained her judo commitments while learning to transfer her skills to wrestling.

"I got better at judo from doing wrestling - I guess it was the cross-over training. In 2018, I got selected for the Commonwealth Games for wrestling." She finished sixth. "From there, I started excelling in the sport and I think I'm still improving."

Just before the world shut down earlier this year, Moceyawa travelled to Morocco for an Olympic qualification tournament. But it was called off shortly after her arrival.

"To be honest, it was really hard. I went to the other side of the world and I was cutting weight and the event was cancelled. Because we're not funded athletes, a lot of that is out of our own pockets," she says. "But I'm trying to keep positive because I know it's not the end of the world."

She landed back in New Zealand as the country went into Level 4 lockdown, and decided to form a bubble with another friend, 2019 MMA world champion Michelle Montague, who was also meant to be travelling to Morocco from another competition event.

"We built a dojo which was pretty cool. I think having someone who understood what I was going through was good. She'd pick me up when I was having down days and then sometimes she would go through it, so we had that balance," says Moceyawa.

Surrounding herself with a "really good team" is also helping her through this period.

"I'm in touch with my coaches and nutritionist pretty much every single day. I tell them how I feel so we can plan things around it. Being honest with them is key," she says.

Moceyawa trains twice a day, mostly at the University of Waikato Adams Centre of High Performance at Mt Maunganui, but balancing her wrestling regime with her work and personal life is also important.

"For work, I make fishing kayaks. We mould and kit them out, then test them which is real fun. It's a big hobby of mine outside of wrestling. Plus, [my employers] are flexible with my sport and I really love the job," Moceyawa says.

To qualify for the postponed Tokyo Olympics, she needs to take out the national title again in October, finish in the top two at the Oceania event next year in American Samoa, and place first or second in Oceania Africa.

"It's very difficult to get top two [in Oceania Africa]. It's not impossible, but I've got some of the best girls in the world in my weight group there," says Moceyawa, who was the back-to-back Oceania champion in 2016 and 2017, and was runner-up in 2019. She also brought home the bronze medal at the 2017 Commonwealth championships.

"She's amazing. She's done amazing things for the girls in Africa, especially in Nigeria," she says. "I'd love to match up against her and have a good go. I have a lot of respect for her and I definitely want to wrestle the best straight away."

There will be other qualification options if those requirements are not achieved, but at the moment, everything depends on where the world will be next year with Covid-19.

Despite the unknown, Moceyawa says she's keeping the end goal in mind.

"If I feel unmotivated then I think about Fiji and going over there. That keeps me on point," she says. "I'm also really grateful for everything I have. All these people put time into me - wrestling is an individual sport but I literally have a team relying on me, and I'm doing the same with them."

A young generation of children who may not have the means to stay in grappling sports are also relying on Moceyawa to make her mark and pave the way, so they too can have opportunities like she did.

-This story originally appeared on the Newsroom website and was republished with permission.