By the Asia Media Centre

In a little hole-in-the-wall sushi shop in Asakusa district, Tokyo, basketballer Stella Beck found herself sitting for hours, listening to the owner's tales. 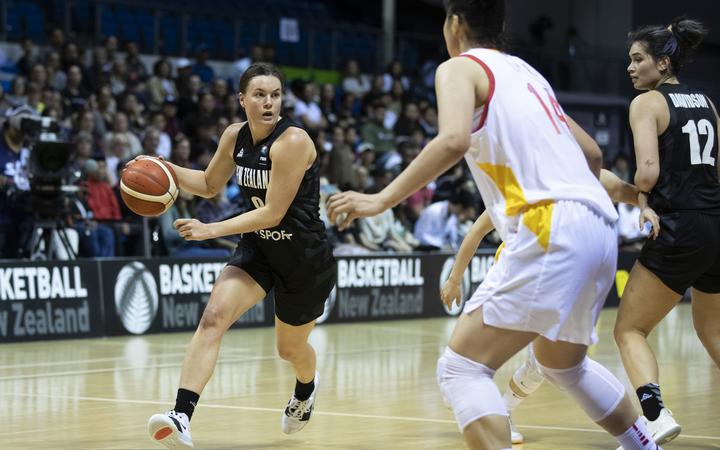 Stories of his great, great grandfather founding the shop accompanied the slices of fresh fish - "some of the best food I've ever eaten" - he'd place down in front of her and her foodie buddy, fellow Tall Fern Toni Edmondson.

"He who spoke really, really wonderful English and his great, great grandfather started the sushi shop on a little cart out on the street. That cart was now their register and now they have a house and shop."

It was 2019, Beck's second time in Japan, training with the Tall Ferns for the then-2020 Olympics.

She's normally based in Melbourne, playing for the Boomers in the Australian WNBL, but found herself back in New Zealand for the Covid-19 pandemic.

"It's been quite nice to have a bit of a break and slow down, hang out."

Beck was part of a winning team at Hutt Valley High - in 2010 and 2011, the team won back-to-back at the National Secondary School Championships.

She made her international debut in 2011, taking to the court in the FIBA under-15 Women's Oceania Championship. In 2013, she made her debut with the Tall Ferns.

Over her career, she's played often in Asia and said New Zealand basketballers were developing more into the style of play seen across the region.

"When we were in Oceania, we were competing with Australia mostly and they're quite a big dominant powerhouse team. Whereas when you go to Asia and compete in Asian competitions, they're a lot smaller naturally, so they're a lot more fast paced. Keeping up is more difficult so it's more of a run-and-gun style."

She's seen the difference in crowds too. In her first trip playing in China, the crowds astounded her.

"The whole stadium was full, they were roaring to go, the crowds were amazing, which I just think isn't quite here for us [in New Zealand], especially for the women."

But especially in her most recent trips, pre-Covid, it's the cultural experiences that have stayed with her the most.

On her most recent trip to Japan, Beck also had the chance to visit the Motoyu Ryokan onsen in Atsugi, where - on another food adventure - she ate a traditional Japanese meal.

"The food was very different, I wouldn't have known that that was authentic Japanese food if I hadn't been there. There was the food that we know of - raw fish and sushi - but I remember little gelatin things that had different fruits inside and a fish that just had a skewer through it."

Her willingness to dive into Japanese culture is also how the self-described foodie ended up finding the sushi shop.

"Me and Toni, we went on more of a food expedition. We went to try and find various different things that we could eat that were more authentic to Japan."

In their conversations with the shop owner, they learned how to eat sushi properly, the best kinds of sushi - raw tuna with rich fat running through it - and just went with the flow.

"I eat anything and I'm happy to try anything. So that was exactly what I wanted."

-This story originally appeared on the Asia Media Centre and was republished with permission.