New Zealand's top winter sport athletes have this week return to their elite training facilities with fingers crossed that some international competition will return later this year. 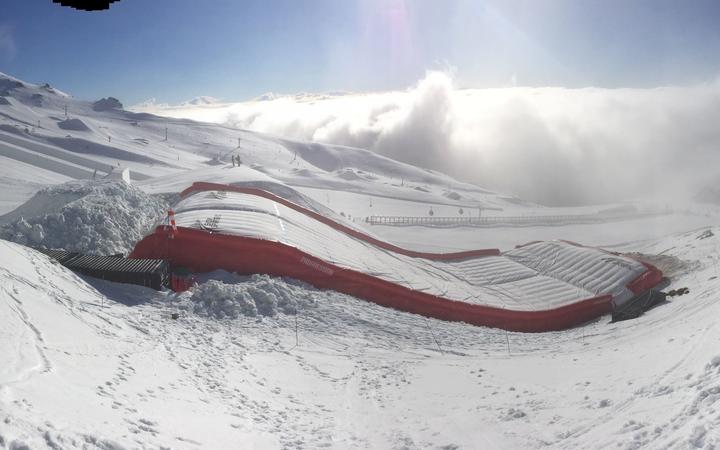 A big inflatable landing bag has been installed at the Cardrona Resort near Wanaka allowing aerial specialists to practice their tricks without the danger of injury.

Training facilities for the slopestyle skiers and boarders, including pipes and rails, are expected to be up and running in the next couple of weeks, weather permitting.

New Zealand has a burgeoning snow sport programme with a number of young athletes starring on the world stage with the likes of snowboarder Zoi Sadowski-Synnott and freeskier Nico Porteous picking up Olympic medals in 2018 and alpine skier Alice Robinson winning two races last season.

The coronavirus pandemic cut short the last international season and the future of next season remains up in the air.

However Snow Sports New Zealand is in the fortunate position to be able to start their home training programme and High Performance Director Nic Cavanagh couldn't be happier.

"The first day of operation for the landing bag was up at Cardrona Alpine Resort on Sunday and our elite athletes got to hit a high elite facility for the first time in just over 120 days."

The big landing bag is a training apparatus for their elite slope-style athletes, free ski and snowboard athletes allowing them to land safely.

Zoi Sadowski-Synnott, Tiarn Collins are Finn Bilous were among those who got straight onto the bag, while the National Development and the Cardrona squads will also get use of it.

The setup involves a steep run of about 150 metres, a kicker where the athletes set themselves for the jump.

Cavanagh says back in March with Covid-19 taking affect, their main focus was to get all of their athletes back into the country before lockdown.

Since then it's been all systems go getting them back into off-snow training.

"Our guys have been busy in the gym, out on a bike or out surfing, any of those moving platform related activities, and then when the resorts opened about three weeks ago they got back on the snow and they've been really working hard on their fundamentals up there in lieu of getting our high end facilities up and running."

"Fundamentals are like preseason training for rugby, it's getting their bodies back to that sort of injury prevention level and making sure that they don't go too hard too early and just getting some miles in their legs before the high end training starts."

The only setback has been one of their development coaches who is Scottish and has been unable to travel, but they've replaced him with a local.

They're still working with immigration to get the American coaches of Alice Robinson into the country.

"I suppose one of the silver linings of Covid... is the break that we've had off the snow has allowed athletes to try and overcome any long term niggles and make sure their bodies are a hundred percent before they tackle the season.

At this stage the season includes a scaled down Winter Games in August which will involve just New Zealand athletes, with no overseas teams allowed in the country.

"Our focus for all of our facilities this year is to ensure that we maximise them through spring. At the moment the International Federation has targeted November for the start of the World Cup and the start of the Olympic qualifying schedule, we think that's a bit optimistic but we are planing towards that and we're working with our resort partners that we farm the snow as much as we can right through spring so that our guys are training when the rest of the world won't be," said Cavanagh.

He says there are a couple of places in the northern hemisphere where training is still possible but they're likely to close in the next few weeks.

But its full on in New Zealand.... age group and grassroots competition will proceed over the next couple of months for skiers and boarders and the National Alpine Ski Champs will be held at Coronet Peak in September.