The Black Caps pace bowler Trent Boult remains undecided on whether he will travel to India for the IPL Twenty20 competition, as he awaits confirmation whether or not the tournament will even go ahead.

The decision by the ICC to call off the T20 World Cup in Australia in October due to COVID-19 is expected to lead to the Indian Premier League saying it will now fill the window having postponed its competition since March.

Boult expects to learn over the next couple of days what's happening with the IPL which will then force him to make a decision.

"I've heard lots of whispers that it happening in this or that window, that it's happening in (New Zealand), things seem to be changing almost every week but it's just one of those things that I will have to let unfold. 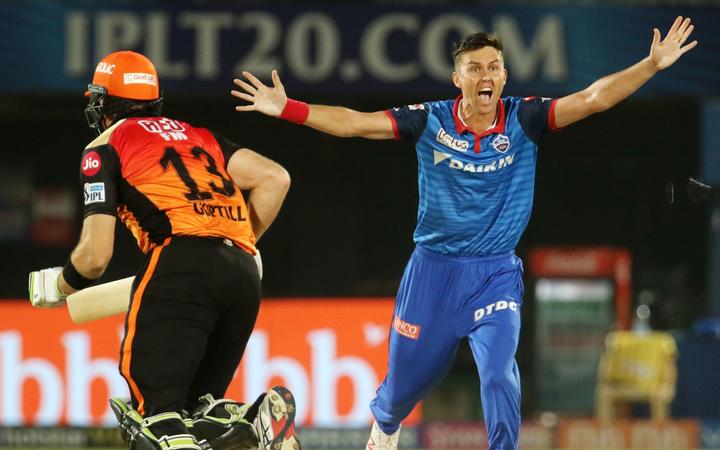 Trent Boult playing for the Delhi Capitals in last year's IPL. He has been traded to the Mumabi Indians for 2020. Photo: Photosport

Boult is one of six New Zealanders signed to play in the IPL joining former Black Caps Mitchell McClenaghan at the Mumbai Indians.

Jimmy Neesham and Lockie Ferguson are at the Kolkata Knight Riders, Kane Williamson is at the Sunrisers Hydrabad and Mitchell Santner is at the Chennai Super Kings.

"I'll talk to the right people and then make that decision on what's best for me, best for my cricket and obviously what's best for my young family...there's obviously a couple of other New Zealanders involved in that tournament - but it's just going to have to be one of those 'time will tell' kind of things," he said.

"I want to be out there playing and doing the things that I know how to do ...but it still looks like it's going to be a wee while before crowds are screaming at us and being right behind us but I can't wait as it's been a long time between overs - no-one wants to be stuck inside a tent in the middle of winter training."