Sio Tomkinson scored a try after the final siren as the Highlanders rallied from an early 24-0 deficit and produced a storming second half to beat the Chiefs 33-31 in a testy Super Rugby Aotearoa clash in Hamilton on Sunday. 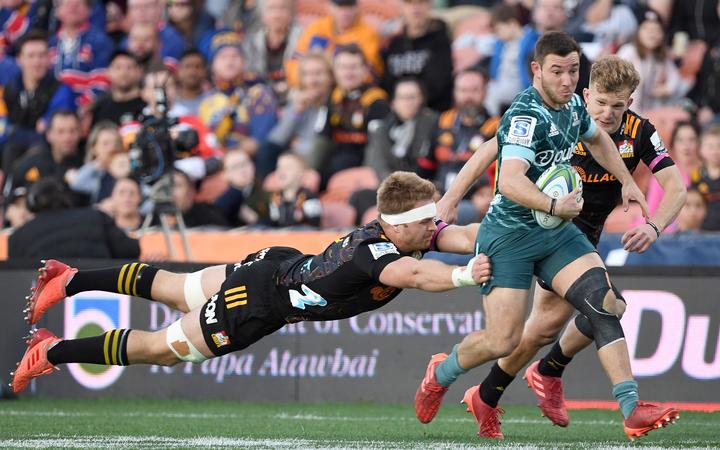 Tomkinson's 82nd-minute try levelled the scores at 31-31 before Mitchell Hunt slammed over the match-winning conversion to consign the Chiefs to a record-equalling sixth successive loss.

The home team had lost their last five games across both Super Rugby and the domestic competition and were desperate to avoid matching a losing record the team had across the 2008 and 2009 seasons.

Warren Gatland's side raced out to a 24-0 lead inside the first 22 minutes with tries to loose forward Lachlan Boshier, centre Anton Lienert-Brown and hooker Bradley Slater.

The Highlanders managed to reduce the deficit when loose forward Marino Mikaele-Tu'u was driven over in the 30th minute and the home side went into halftime with a 24-7 lead.

Slater extended that advantage virtually straight after play resumed when he grabbed his second try.

The momentum, however, switched firmly back to the Highlanders with fisrt-five Hunt and halfback Aaron Smith both scoring to get their side within striking distance at 31-19 with about 25 minutes remaining.

Jona Nareki then gave his side some hope of an amazing comeback when he scored a blistering try to drag his side to 31-26 in the 75th minute.

The Highlanders were then awarded a midfield penalty in the final minute and kicked to the corner where they set up an attacking lineout drive and sucked in the Chiefs defenders to create the gap for Tomkinson to score close to the posts.

The Chiefs face the Blues on Sunday at Eden Park, while the Highlanders have a bye.