New Zealand's newest national basketball competition has been launched with young players in mind, but internationally the top-tier players of 3x3 are closer to middle-age. 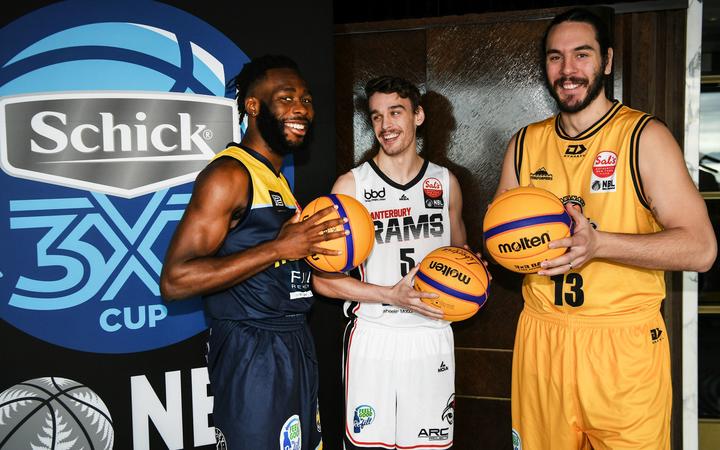 Sam Aruwa, Taylor Britt and Zach Easthope at the launch of The 3x3 Cup. Photo: PHOTOSPORT

On streets around the country, and the world, basketball players of all levels of talent can be found playing small-sided pick-up games.

However as basketball's governing body, Fiba, puts more emphasis on 3x3 and the format is included in the Tokyo Olympics, New Zealand Basketball is formalising the social side of the sport with the launch of The 3x3 Cup.

The 3x3 Cup will see 10 men's teams and 10 women's teams competing over three days in Southland in September.

The elite competition will include Auckland Huskies, Nelson Giants, Canterbury Rams, Otago Nuggets, Taranaki Airs, Southland Sharks, Manawatu Jets, Franklin Bulls, Hawke's Bay Hawks and an invitational team on the men's side of the draw for the competition which tips off on 3 September.

After this inaugural season, the plan is to see the tournament played throughout August 2021, with four stops on a nationwide tour to find the best NBL 3X3 teams and players.

At the international level, already Fiba has been developing their World Tour and hosting 3X3 continental and world cups for a number of years.

"Most of the teams in the world tour and the international tournament's I've been to the average age would be mid-30s and there is a few young 40-year-olds that play on it, it's just a pathway that allows anyone to play on it really," Easthope said.

Easthope has been playing for the Taranaki Mountainairs in the current NBL competition and said 3x3 was a lot quicker - with the shot clock for 12 seconds- and there was more room for "you to play the game you want to play".

"It exentuates the things that players do better, so if you are a physical player you can kinda use that physicality a lot more in 3x3, if you're a shooter there is more space for you to be wide open, for a shooter if you cut to the basket the space in the lanes is so much wider, just the things that you do well in five-on-five is so much easier to impose on the other teams," Easthope said.

3x3 is popular in parks and rec centres and despite the differences between the traditional five-on-five and the small-sided game, Easthope said all basketballers could adapt.

"The style of play is embedded in our DNA as ballers, so I think legitimising it in an NBL-style tournament definitely gives it more recognition on a national level to give us international pathways."

"3X3 has been quite the innovation in the sport these past 10 years," King said.

"Fiba has long seen the potential in this new version of the sport, with its inclusion at the Olympic Games it is going to be exposed to a global audience of billions.

"It is a fast-paced and high energy game, one that requires a huge tactical awareness but also one that rewards strong one-on-one play, allowing players to express themselves on offence and defence."

New Zealand can already point to a successful record on the international stage.

The first major victory was at the inaugural U18 Men's World Championship in 2011 when Isaac Fotu, Tai Webster, Reuben Te Rangi and James Ashby took the honours. New Zealand captured that title again in 2015.

The 3X3 Tall Ferns have also shown they're very competitive on the international stage with a 2018 Asia Cup gold medal to their name and qualification at the World Champs in 2019. The U18 Tall Ferns won silver in the 2019 World Cup.