Latest - National Rugby League clubs based outside of Queensland must revert to the NRL's original biosecurity protocols - which prevent players and staff within team bubble going to cafes, restaurants, pubs, beaches and golf courses. 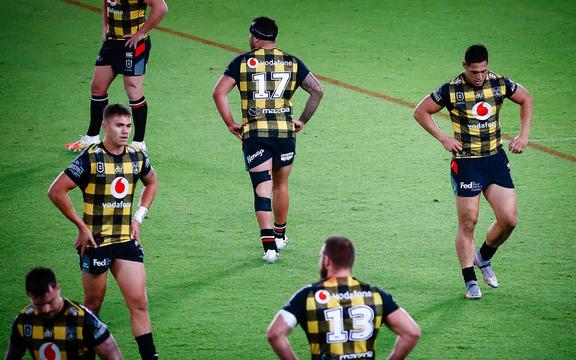 The Warriors are based in New South Wales and will be impacted by the changes which are aimmed at avoiding community contact during the current spike in Covid-19 cases in Sydney.

The Australian Rugby League Commission Peter V'landys said the decisive action was due to the rapidly changing Covid-19 landscape.

"We won't take any risks with our players and the community. All our decisions are based on the data and we've said from the start, if the data changes then we will be proactive and take the necessary action required,'' he said.

"We are enforcing the original protocols to ensure our players are not mixing with the general community. We are doing everything we can to keep the playing group healthy during this period.

"Our experts are continuing to monitor the data. We don't make decisions based on emotion, we make them based on data. We hope it's only a short spike in the infection rate, but the Commission has shown we will be agile and make the appropriate changes."

Manchester United have suffered a blow in their hopes of finishing in the top four of the English football Premiership. 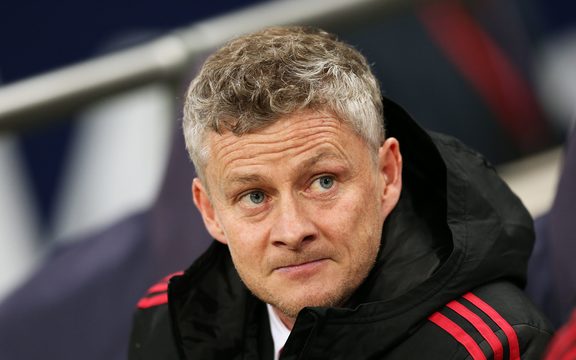 United have been held to a 2-2 draw by Southampton at Old Trafford.

Southampton opened the scoring in the 12th minute, but United struck back twice before the break and appeared set for all three points until the visitors scored in stoppage time.

United remain fifth on goal difference behind Leicester, while Chelsea are another point ahead in third.

The top four qualify for Champions League football next season.

There are three games left.

Meanwhile Wycombe Wanderers have won promotion to the second-tier Championship for the first time after a 2-1 win over Oxford United in the League One playoff final at Wembley.

Wycombe, a non-league club until 1993, were promoted from League Two last season and secured victory thanks to a 79th minute penalty from Joe Jacobson.

Warriors players may have extended stay in Australia

Homesick Warriors' players will have to remain in Australia for another week beyond their self-imposed deadline.

The players gave the National Rugby League until July 19th to get exemptions from Australian government agencies for their families to join them in New South Wales.

If the NRL fail to get the exemptions - the club says it will allow the four players considering leaving to head home on Monday after Sunday's game against the Sharks.

However, RNZ understands there are no available flights until July 27th and players will have to stay and play against the Roosters on July 25th before they can get out of Australia.

Ken Maumalo, David Fusitu'a, Agnatius Pasi and King Vuniyayawa have all indicated they would head home to be with their families.

Another draw in Premiership

Another draw in the ANZ netball Premiership with the Canterbury Tactix and Waikato Bay of Plenty Magic finishing in a 46-46 stalemate. 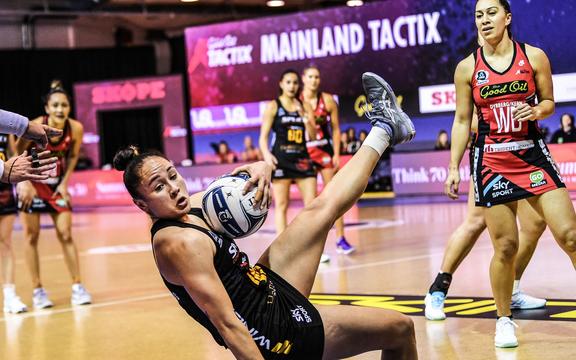 The Magic and Stars finished 46-all a week ago.

There was little between the two sides as the scoreline suggested.

The Magic were desperately searching for just their second win of the season, and had their moments - all be they brief - in the lead. Meanwhile the Tactix, coming off a one-goal win over the Mystics 24 hours before, wanted to win to stay in touch with table toppers, the Pulse - the draw putting them in third spot.

With both teams on back-to-back games, the tactix led by three after the first quarter, it was level at half time and the Magic led by two going into the final quarter.

Tactix coach Marianne Delaney-Hoshek reverted back to her original shooting combo of Ellie Bird and Te Paea Selby-Ricket for the last spell, but it was at the other end, where they really started to gain traction. Their experienced defenders Jane Watson and Temalisi Fakahokotau really came to the fore, and a run of three nudged the Tactix back into the lead.

With less than two minutes on the clock, the scores were tied again. Both sides didn't let off in intensity, and scoring off their four centre passes, the game remained locked up at fulltime.

No crowds for rest of golf season

The US PGA golf Tour will conduct the rest of its season without fans after the circuit's three playoff events announced they will be contested without spectators due to the Covid-19 outbreak. 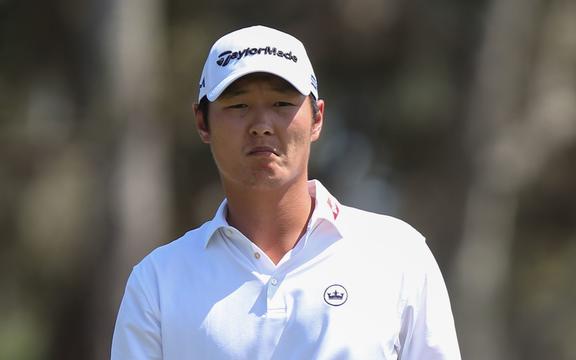 In three separate statements, The Northern Trust in Norton Massachusetts, BMW Championships in Olympia Fields, Illinois and Tour Championship in Atlanta, Georgia all confirmed the events would be closed to the general public.

The decisions by the three tournaments, which determine the season's champion, follow similar announcements from the other remaining PGA Tour events on the circuit's revamped schedule.

PGA Tour Chief Tournaments and Competitions Officer Andy Pazder said in a statement along with the BMW Championship's decision that: "Our No. 1 priority remains the health and safety of everyone in the communities where we are invited.:

The PGA Tour's playoffs are scheduled to begin August 20-23 at TPC Boston for The Northern Trust, followed by the August. 27-30 BMW Championship at Olympia Fields Country Club and September. 4-7 Tour Championship at East Lake Golf Club.

This week's Memorial Tournament in Dublin, Ohio will mark the sixth consecutive PGA Tour event held without spectators since the circuit swung back into action in mid-June after a three-month Covid-19 hiatus.

No Chicago marathon this year

The 2020 Chicago Marathon has been cancelled due to the COVID-19 pandemic.

The race, scheduled for October 11, was the latest World Marathon Major disrupted by the worldwide novel coronavirus outbreak.

Last month, the New York City Marathon, one of the most prestigious events on the global running calendar, was cancelled due to the pandemic while the Boston Marathon was also cancelled for the first time in its 124-year history.

Plans for a 2020 Berlin Marathon were also scrapped.

The London Marathon, originally set for April, was postponed to October 4, with organisers planning further updates on the race later this month.

Canterbury back-rower Corey Harawira-Naera could be available for Dean Pay's beleaguered squad as early as next week after he and Jayden Okunbor had their contracts reinstated by the NRL. 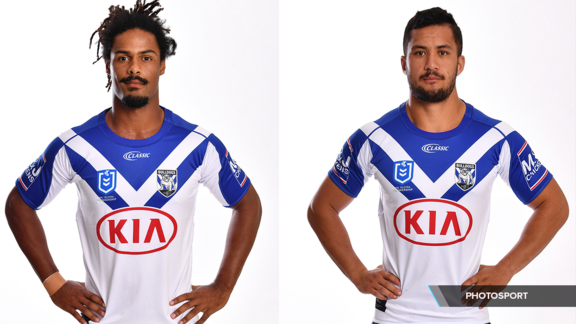 The two Bulldogs players had their registrations cancelled by the governing body on April 1 over their involvement in a pre-season incident involving schoolgirls they had met during a clinic at a local high school in Port Macquarie.

The NRL Appeals Committee revised the pair's sanctions, allowing both players to resume their playing commitments once their revised suspensions have been served.

Harawira-Naera has served all but one game of his 10-match suspension, which also included a $20,000 fine for the New Zealand Test back-rower's "serious breach of the league's code of conduct".

As a result, he will potentially be available for selection for round 11 when the Bulldogs play Newcastle, pending the NRL's biosecurity advice and whether Canterbury add him to the club's 50-person bubble.

Okunbor still has a month to serve on a 14-game ban, with his punishment also including a $25,000 fine and a course of counselling or community service.

City free to play in Europe

Manchester City's two-year suspension from European football has been overturned by the Court of Arbitration for Sport, allowing the club to compete in next season's elite Champions League competition. 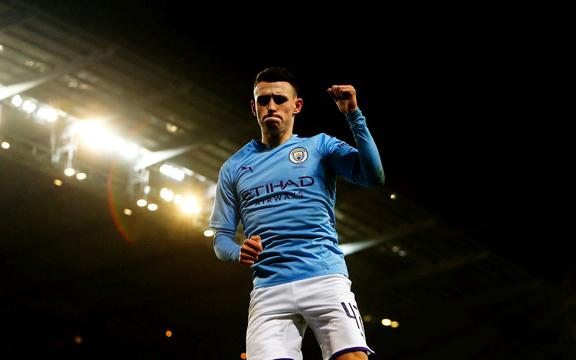 CAS ruled that City did not breach Financial Fair Play rules by disguising equity funding as sponsorship. Sport's highest court also reduced a fine for failing to cooperate with UEFA to $17 million from $52 million.

"Most of the alleged breaches reported by the (UEFA) Adjudicatory Chamber of the CFCB (Club Financial Control Body)were either not established or time-barred," CAS said in a statement.

Missing out on the Champions League would have cost City, who have denied any wrongdoing, as much as $192 million in prize money and broadcast revenue, as well as matchday and other revenues.

Zaha calls on social media to clamp down on racism

Crystal Palace's Wilfried Zaha has called on social media platforms to identify and remove users who resort to racist abuse after the forward was targeted before his team's English Premier League match at Aston Villa yesterday.

The Ivory Coast international shared images of the messages he received, including one of members of the white supremacist organisation the Ku Klux Klan, and a 12-year-old boy from Solihull was arrested.

Zaha thanked West Midlands Police for taking swift action but said it was not enough to promote anti-racism slogans.

"People need to understand that whatever your age, that your behaviour and your words come with consequences and you cannot hide behind social media," Zaha said in a statement on Twitter.

"It's important social media platforms do as they did yesterday and seek out these individuals and remove them. This is not the first time I have received messages like this, nor am I the only player to receive messages like this - it happens every day.

Houston Rockets star and former NBA Most Valuable Player Russell Westbrook has announced that he tested positive for the coronavirus. 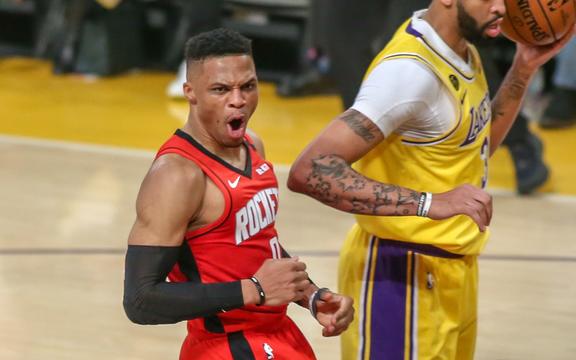 Westbrook revealed the news on social media. He was not on the team plane when the Rockets traveled to Florida last week, where the NBA will resume play later this month at the ESPN Wide World of Sports Complex. Fellow guard James Harden and recent addition Luc Mbah a Moute also were not aboard the flight.

"I tested positive for covid-19 prior to my teams departure to Orlando," Westbrook tweeted. "I'm currently feeling well, quarantined, and looking forward to rejoining my teammates when I am cleared. Thank you all for the well wishes and continued support. Please take this virus seriously. Be safe. Mask up! #whynot.

The nine-time All-Star was playing in his first season with the Rockets after being acquired in a trade with the Oklahoma City Thunder last summer. He played 11 seasons with the Thunder, highlighted by a 2016-17 campaign in which he earned NBA MVP honors after averaging a career-best 31.6 points to go along with 10.7 rebounds and 10.4 assists.

The Rockets' first game in Florida is scheduled for July 31 against the Dallas Mavericks.

The future of Super Rugby remains under a cloud as COVID-19 travel curbs continue to stymie cross-border contests but the manager of Pacific Islands-focused Kanaloa Hawaii says they have been in discussions about entering a team in the competition.

Kanaloa Hawaii are backed by a group of former All Blacks of Pacific Island heritage and were provisionally approved on Friday to play in North America's Major League Rugby competition from next year.

Media reports in New Zealand and Australia have suggested a Pasifika team could be included in a revamped Super Rugby competition and Kanaloa Hawaii's General Manager Cam Kilgour told Reuters they had already got the ball rolling.

"We have been in discussions with them for a while," he said. "We're definitely keen for it."

Kilgour did not know the specifics of the plans being discussed but said the team and their investors saw Super Rugby as part of their long-term future.