The bitter rugby rivalry between the Crusaders and Blues and Canterbury and Auckland has been re-ignited ahead of the tomorrow night's clash in Christchurch. 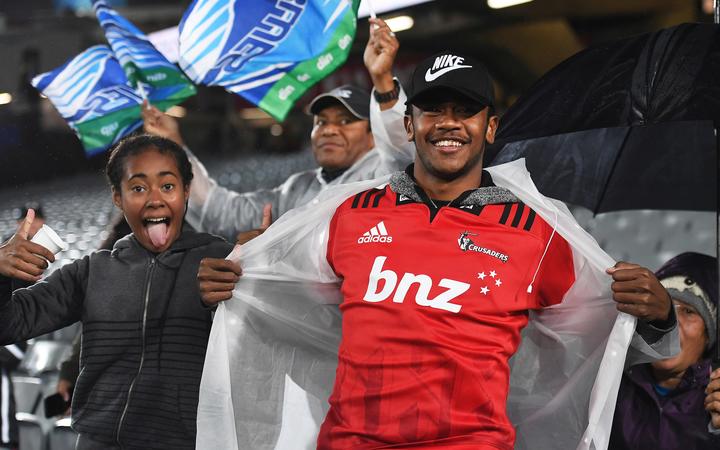 The provincial bloodfeud, which dates back more than a century, has waned in recent years with the nine times champion Crusaders dominating almost all comers.

But with both sides unbeaten after their first three games of Super Rugby Aotearoa Saturday's match up has fans and players hoping for a new chapter in the storied conflict.

Carlos Spencer sparking a length of the field try to seal the win for the Blues over the Crusaders in 2004 before flipping the Canterbury crowd the bird, epitomising the intense rivalry between the two teams.

"I actually thought to myself 'I wish there were a few more minutes to play', so that we could kick off and get the ball to him and maybe just remind him, through a tackle or a shot where he was and what he had done, haha. But sometimes you just have to eat humble pie and Carlos made sure we got a helping of it," he said with a laugh.

The last time the Blues beat the Crusaders away from home, Carlos Spencer did this pic.twitter.com/c9u0F5NvGV

While that night brings up the bile for Crusaders players and fans, it warms the heart of veteran Blues hooker James Parsons.

"I always think back to that 100 metre try very fondly. It's a great memory and the last time we (Blues) won down there. That's going back to when I was a kid so that's pretty sad for the Blues and our supporters and gives us everything to play for."

And while the image of King Carlos signalling the Lancaster Park crowd is burned into the memories of both Crusaders and Blues fans alike, Marshall said the rivalry between the two sides started long before Super Rugby.

"Canterbury and Auckland had some dramatic and intense encounters, a lot of them based around the Ranfurly Shield.

"The catalyst for that rivalry evolving into Super Rugby was in 1995 when we had a Shield defence against Auckland in Christchurch. We were the holders, they had a team stacked full of All Blacks; the likes of the Brooke brothers, Sean Fitzpatrick, Michael Jones etc. They came down and absolutely destroyed us and embarrassed us and the following year in 1996 Super Rugby started and that rivalry just followed into Super Rugby from provincial rugby."

That Super Rugby rivalry has taken a back seat to other less one-sided conflicts for the past decade, with the Blues losing their last 11 matches to the Canterbury-based side.

Just three current Blues players, Parsons, captain Patrick Tuipulotu and prop Ofa Tuungafasi, have ever beaten the Crusaders, back in 2014 in Auckland, and none of them have ever triumphed in Christchurch.

Parsons said the Blues feel as prepared as they can be to try and claim what would be a drought breaking win, not only for them.

"Coming off a bye, we're all fresh to rip in and have a good crack at them down there. It's an exciting challenge and one we're well and truly up for. It's not just about us trying to win down there either, it's a challenge for any team, I don't think anyone has beaten them in their back yard for about 32 or 33 games."

This Saturday, the rivalry is back ON!

In fact, the Crusaders haven't been beaten at home in 35 games and breaching that Christchurch fortress is surely the biggest challenge in Super Rugby.

Staunch Crusaders supporter, pundit and host of Canterbury club rugby's The Integrity Unit podcast, Dan Bell, believes the Blues are in for a reality check.

"I just think the Crusaders know how to win in Christchurch, all Canterbury teams do. The Crusaders they just know how to get the job done at their fortress. If nothing else, they want to win all their home games. Sometimes it's ugly, sometimes it's beautiful, but they grind out games and they kno

"It's in the bag for the Blues isn't it? They're breaking droughts left right and centre at the moment so happy days.

"Considering their (Crusaders) best ever player, Dan Carter is on/isn't even on our (Blues) bench, he can't even make our top squad. I'm fully confident, I've bet my nuts on this game. If the Blues lose I've promised to change my Facebook profile picture to a Crusaders logo for a month. Can't let that happen it would break my heart. Up the Blues!"

Differences aside Bell and Armstrong agree, New Zealand rugby's biggest rivalry is back and kicks off in Christchurch tomorrow night.