The 30 year old Gleeson played for Portland between 2011 and 2018 beforer suffering shin pain in both his legs.

The Oregonian newspaper reports the $15 million lawsuit alleges two physicians were medically negligent in selecting a risky procedure to repair stress fractures, that they failed to properly sterilise metal implants inserted in his leg and failed to remove an implant when he suffered an infection. 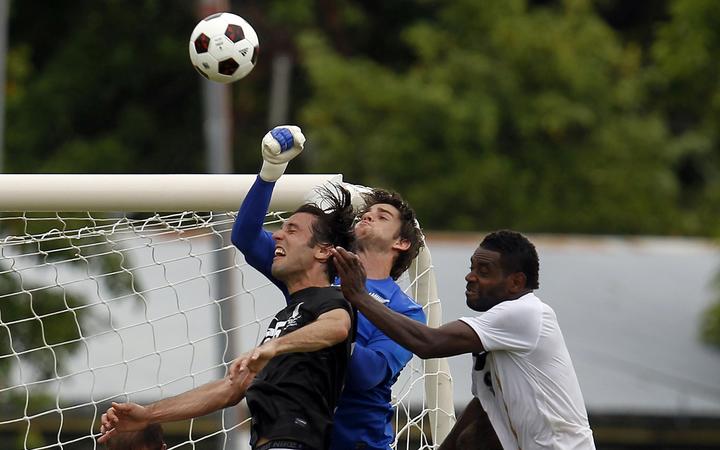 Keeper Jake Gleeson in action for the All Whites against Fiji at the Oceania Nations Cup in Honiara in 2012. Photo: Photosport

"I'm physically not the same. I'm emotionally not the same and I just would like to understand why and how someone could do this. I can't go through my life not telling this story. (I need to bring) attention to this to prevent this from happening to anyone else."

Gleeson says he developed shin pain in both of his legs in 2018 and medical staff diagnosed him wtih tibial stress fractures.

He had inserted metal plates inserted in surgery in August of that year and at the time the Timbers said the surgery was a success and that Gleeson would be back on the field within two months.

Gleeson said he was running on a treadmill less than a month later and thought he was on track to return to play, until he began noticing redness and puffiness in his right shin.

He had a second surgery a month later to clean the infected area but the metal plate wasn't removed.

The plate was however removed in a third surgery later that month and the plate in left leg removed in October.

Following the first three surgeries, Gleeson went on to have eight additional surgeries on his right tibia over a six-month period.

Nearly two years after his first surgery, Gleeson said he remains in constant pain and can no longer perform many athletic tasks.

He said he can't run for an extended period of time, and jumping remains difficult.

He recently served as a volunteer coach at Saint Mary's College of California, but said he had to adapt his coaching style because kicking a football ball still causes him pain.

Gleeson said his long-term outlook is unclear. Even getting to the point where he is healthy enough to play a pickup game "would be pretty special," he told The Oregonian.