The Crusaders have run away with a 40-20 win over the Highlanders in Dunedin to move to the top of the Super Rugby Aotearoa standings. 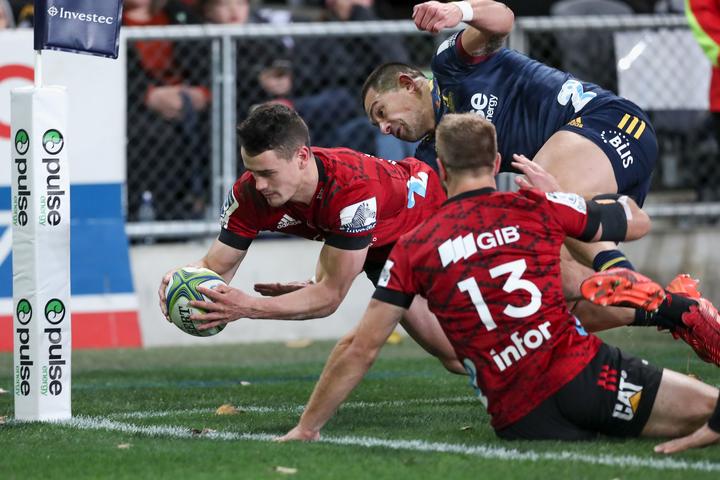 Will Jordan scores the first of his two tries against the Highlanders Photo: Photosport Ltd 2020

The defending Super Rugby champions have scored four unanswered tries in the second-half, after trailing 17-14 at halftime.

Two of the tries came in the last five minutes to flatter the Crusaders who were pushed by the Highlanders in a typically tightly fought southern derby.

Young winger Will Jordan and flanker Tom Christie each scored twice for the Crusaders, while replacement back Sevu Reece also dotted down to give the visitors a bonus point.

Crusaders captain Codie Taylor has hailed their halftime team talk for their change in fortunes.

"The messages at halftime were really crucial for us to change the game in the second-half," Taylor told Sky Sport.

"We tried to play a bit too much in the first and our discipline let us down. We just knew that if we started to be a bit more direct and earn the right to go through them and then play wide that opportunities would come.

"I'm just really happy with the boys' execution in the second-half."

The Crusaders are now two points clear of the Blues, who they will play next week in a top of the table showdown.

"We're going to go back home and play a really good Blues side that have a lot of confidence and so they should because they're playing bloody good footy," Taylor said.

The Highlanders are seven points further back in third place and their captain Aaron Smith says the Crusaders clinicalness was the difference.

"Their ability to hold the ball, build pressure and score points got us in the end," Smith told Sky Sport.

"I thought we put them under a lot of pressure in that first half. We took our opportunities, but we didn't quite nail ours in the second-half."