Bubba Wallace's fellow Nascar drivers pushed his car to the start-line for the Geico 500 at Talladega, Alabama, to show their support for him a day after a noose was found in his team garage.

The 26-year-old, who is the sole black full-time driver, was overcome with emotion by the show of solidarity.

On the racist incident, Nascar chief Steve Phelps said "we're going to use every effort to find who has done this.

"They will be banned from this sport for life."

The American, who races for Richard Petty Motorsports, posted a selfie on social media in front of his car with his fellow Nascar drivers standing in unison in the background. 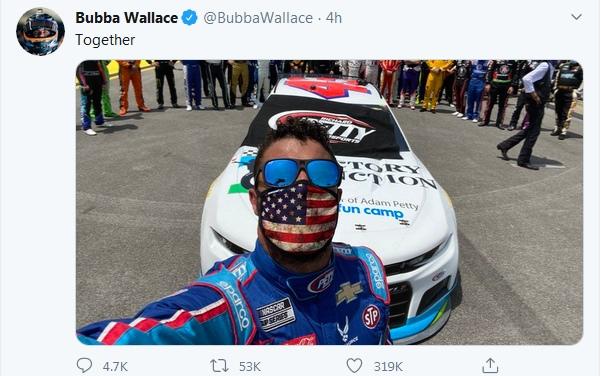 Bubba Wallace and his fellow Nascar drivers ahead of hte Geico 500 at Talladega. Photo: Twitter

And just before the driver began his race his team communicated to him: "Let's go shut these haters up."

The incident involving the noose - a symbol connected to lynching and America's slave history - is being investigated by the FBI and the US Justice Department.