Latest - The much anticipated clash between All Black brothers Beauden and Jordie Barrett won't happen on Sunday. 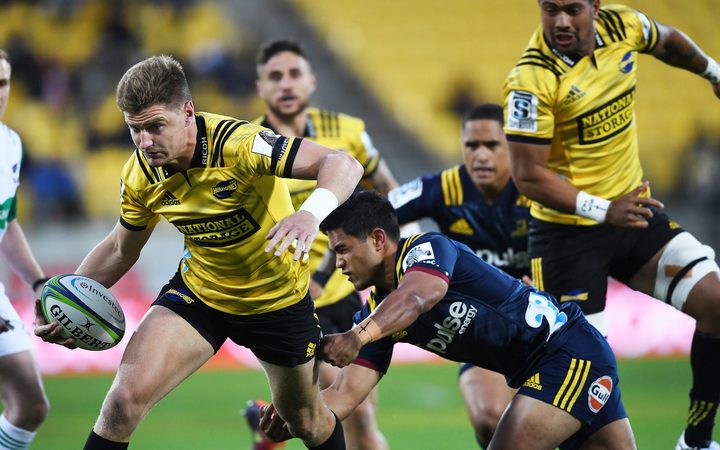 Jordie Barrett in action for the Hurricanes. Photo: Photosport

The latter has been ruled out of the Super Rugby Aotearoa match between the Blues and Hurricanes in Auckland.

Hurricanes back Jordie has a shoulder injury and it's unclear how long he'll sidelined.

Sunday's game will be Beauden Barrett's first for the Blues since leaving the Hurricanes.

Meanwhile the horror injury run continues for the Chiefs and All Blacks prop Atu Moli - he needs surgery for chronic hip dysfunction and will be sidelined for the entire tournament.

Moli sat out the whole of the 2018 Super Rugby competition with a horrific leg injury that threatened to end a professional career that had only just begun.

The severe haematoma Moli suffered to his quad muscle in the first match of that season left him with a graphic open scar for three months, with one doctor unable at one point to rule out amputation.

He recovered and played for the All Blacks at last year's World Cup, but again his career is on hold.

Sam McNicol has also been ruled out of the competition. He had ankle surgery last week to correct his anterior impingement and tidy joint surfaces. Replacement players are not currently required.

However Tupou Vaa'i will join the Chiefs squad.

The two metre Taranaki lock has been training with the Chiefs squad since the team returned to training.

The injury replacement is for locking duo Michael Allardice and Laghlan McWhannell who have sustained season ending injuries.

NASCAR to have fans

NASCAR will allow a limited number of spectators to attend two races in Florida and Alabama later this month amid the Covid-19 pandemic.

The plan to reintroduce guests at select NASCAR Cup Series races will begin with the June 14 Dixie Vodka 400 at Homestead-Miami Speedway and the Geico 500 at Talladega Superspeedway.

NASCAR, which postponed racing in mid-March due to concerns over the novel coronavirus and resumed action in mid-May, said it will welcome up to 1,000 invited military members to the Miami race while Talledega will allow up to 5,000 guests.

Homestead-Miami can normally host up to 46,000 fans while the capacity at Talladega Superspeedway ranges between 80,000-175,000.

Among the safety measures in place, NASCAR said guests in attendance will be screened before entering, required to wear face coverings and maintain social distance.

NASCAR was the first major sport in the United States to return to action amid the Covid-19 pandemic when it held a May 17 race in South Carolina without spectators.

The PGA golf Tour says it will observe a moment of silence during each round of this week's tournament in Fort Worth, Texas to honour George Floyd, a black American man who died after a white police officer knelt on his neck.

According to the PGA Tour, the moment of silence in its first tournament back since the Covid-19 shutdown will be observed during at 8:46 a.m.

Eight minutes and 46 seconds is the length of time that Floyd was filmed pinned under the officer's knee.

The PGA Tour said in a statement the moment of silence, prayer and reflection is part of its commitment to "amplifying the voices and efforts underway to end systemic issues of racial and social injustices impacting our country."

The PGA Tour returns this week with the Charles Schwab Challenge, which New Zealander Danny Lee is taking part in.

Lisbon is the favourite to host an eight-team Champions League knockout tournament in August, if it is given the go-ahead by governing body Uefa.

Uefa is planning to move the final from Istanbul, where it was due to be held on May 30, for the new format.

The Europa League final, due to be held in Gdansk, Poland on May 27, is likely to be moved to Germany.

Europe's continental cup competitions were stopped in March because of the coronavirus pandemic.

Uefa's executive committee will make its decision on June 17.

It would mean the quarter-finals, semi-finals and final being played in one location as a mini-tournament behind closed doors.

The Champions League final would be played on August 23.

Lisbon has two stadiums with the facilities required to host high-profile matches, and hotels to accommodate the required number of teams.

What is less clear is how the outstanding last-16 matches in both the Champions League and Europa League will be settled.

The Evian Championship, one of five women's golf major tournaments, has been cancelled due to the Covid-19 pandemic. 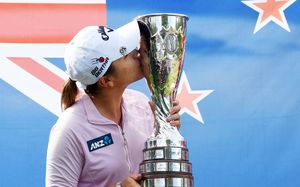 The tournament, due to take place at the Evian Resort Golf Club in France, was earlier moved from July to August due to the coronavirus-enforced shutdown.

With ongoing uncertainty surrounding travel restrictions and government quarantine requirements, the organising committee has concluded that conditions for a "safe event" are not in place.

"Our top priority is of course to ensure everyone stays healthy and safe. All of our teams are very affected by the forced cancellation of our major, but we must not lose sight of what matters most," tournament chairman Franck Riboud said.

The Women's British Open is still scheduled for Aug. 20-23 at Royal Troon Golf Club in Scotland.

The other three major events - the ANA Inspiration, Women's PGA Championship and U.S. Women's Open - to be played in the United States have been rescheduled for later in the year.

Burr back in Warriors lineup 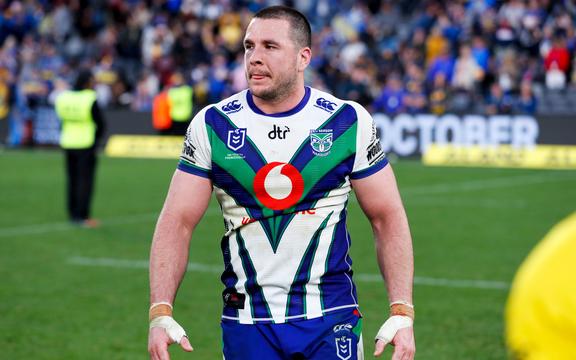 The 27-year-old comes straight back into the starting line-up after a head knock in a field session ruled him out of the opening match of the revived season against the St George Illawarra Dragons and also last week's loss to the Penrith Panthers.

The former Canterbury-Bankstown Bulldogs and Gold Coast Titans forward is now set to belatedly bring up his 50th NRL appearance this week in a career which was broken up by a stint in England.

Burr's return to the second row sees 315-game veteran Adam Blair revert to loose forward on a night when he will play his 50th match for the Warriors since joining the club in 2018.

Moving out of the starting pack is Isaiah Papali'i, who has been named on the eight-man extended bench.

While experienced front rower Agnatius Paasi is available again after serving a one-match suspension, he hasn't been included in the 17 listed to play on Friday night.

The four players slated to be on the interchange are the same as those used against the Panthers. Karl Lawton, originally named in the centres to face Penrith, ultimately moved to the interchange along with new arrivals Poasa Faamausili and Jack Murchie as well as 2020 rookie King Vuniyayawa.

Women's NRL season to go ahead

The Australian Rugby League Commission has confirmed the third season of the NRL women's premiership will take place in September after months of uncertainty for players and staff involved.

The NRL is confident Warriors players and staff will be available to travel to Australia by September, while any speculation that both the Warriors and Roosters were set to withdraw from the competition due to financial restraints appears to have been resolved.

NRL.com understands the competition was due to expand to six regular rounds in 2020, however, with the COVID-19 pandemic creating havoc across world sport, the teams are likely to revert back to the 2018 model where they meet each other once before grand final day on October 25.

Super Rugby teams get a lift from crowds

New Zealand's Super Rugby teams are welcoming the prospect of a "massive lift" from crowds flocking to their stadiums this weekend for a long-awaited taste of the nation's favourite sport. 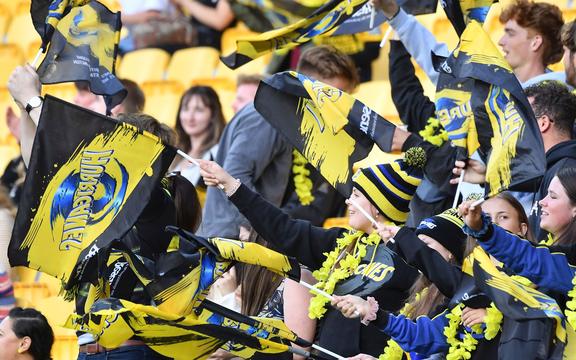 New Zealanders yesterday celebrated their first day without coronavirus restrictions in three months, even as much of the rest of the world grappled with the pandemic.

Blues boss Andrew Hore said more than 20,000 tickets had been sold for Sunday's "Super Rugby Aotearoa" match against the Hurricanes.

The 10-week domestic competition was organised after the wider Super Rugby tournament, which also involves teams from Australia, South Africa, Argentina and Japan, was postponed due to COVID-19.

"We're thinking in excess of 35,000 (will turn up) which will be an amazing result and will make for a fantastic atmosphere and a massive lift for the players of both sides."

More than 12,000 tickets have been sold for the opening match between the Highlanders and the Chiefs in Dunedin on Saturday. The Highlanders are hoping for a crowd of more than 20,000, local media reported.

While the crowds will bring much-needed funds into the game, New Zealand Rugby said on Monday it was no "silver bullet" for its struggling finances. The governing body have forecast a 70% decline in revenue due to the coronavirus shutdown.

New Zealand great Benji Marshall has been dropped from the Wests Tigers starting team for Saturday's NRL game against Canberra.

He's been replaced by Josh Reynolds in the number six jersey.

Marshall, who is equal second in Dally M voting after the opening four rounds, was one of five players axed by Tigers coach Michael Maguire.

"He called me into his office this morning and I was a little bit shocked and disappointed to get dropped," Marshall told Fox.

"But Madge is the coach and he talked about making a change.

"I just need to be better. I understand where he is coming from.

"I've just got to train hard again and show them what I've got to get back into the team."

Coventry City have been promoted to the second-tier Championship after England's Football League clubs (the bottom two divisions) voted to curtail their seasons, halted in March by the Covid-19 pandemic.

Coventry have been confirmed as champions of League One (third tier) with Rotherham United securing the second automatic promotion place to the Championship.

Wycombe Wanderers, Oxford United, Portsmouth and Fleetwood Town will contest the playoffs for the final promotion spot with the schedule to be announced.

The Championship is due to resume the season from June 20.

The clubs agreed that the promotion and relegation outcomes would be decided on a points per-game (PPG) table with playoffs to be staged.

Coventry, FA Cup winners in 1987, return to the Championship for the first time since relegation in 2012.

The club urged fans not to gather to celebrate the achievement but said they would hold an online 'promotion party' which fans and players will be able to join in with remotely.

The Rally Wales GB, scheduled for the end of October has been cancelled for the first time in more than 50 years due to uncertainties surrounding travel and mass gatherings amid the Covid-19 pandemic.

The event, first run in 1932 and among the United Kingdom's top motor sports races, had previously been stopped by World War Two in 1940, the Suez Crisis and resultant petrol rationing in 1957 and the foot-and-mouth disease outbreak in 1967.

It was the fifth round of the 13 race FIA world championship to be cancelled following Rally New Zealand last week, as the novel coronavirus outbreak continued to wreak havoc on the schedule this season.

Rally GB, which has been set in Wales since 2000, is one of two rounds that have been permanent fixtures in the annual world championship since the series was inaugurated in 1973.

More than 40,500 people have died in the UK due to the flu-like virus.

French football clubs not relegated yet

Amiens and Toulouse have been handed a lifeline after France's highest court suspended their relegation from the Ligue 1 football championship, although it upheld the curtailment of the season amid the COVID-19 crisis.

The LFP ended the Ligue 1 and Ligue 2 seasons in April with 10 games remaining after the government said no professional sport would be allowed to return before September.

That meant seventh-placed Lyon, a point off the Europa League qualifying spot, missed out on European football through the standings. It also meant Amiens and Toulouse, who were adrift at the bottom, were relegated.

All three clubs appealed the decision to end the season.