New Zealand driver Scott Dixon has hit the ground running in his return to the race track, winning the season-opening race in Texas. 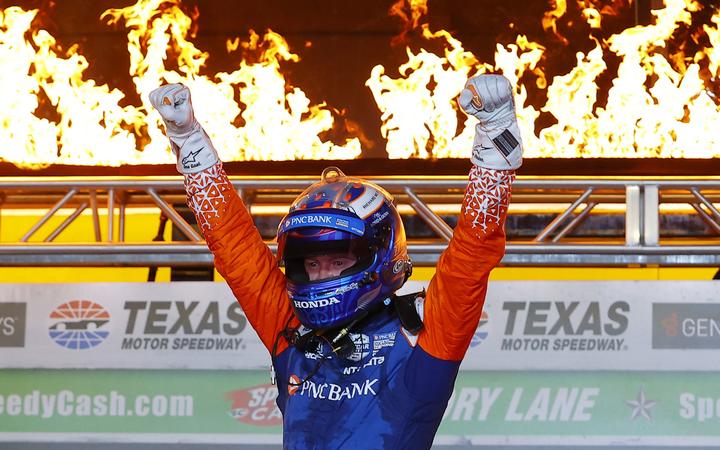 The five-time IndyCar champ qualified second for the event, and claimed the checkered flag at the IndyCar Genesys 300 at Texas.

"We had to make some big bold moves."@ScottDixon9 caught up with the @NBCSports crew after winning the @IndyCar season opener at @TXMotorSpeedway for @CGRTeams. #BackOnTrack // #Genesys300 pic.twitter.com/7ULJZVK729

The event came after a delay of almost three months in the US-based series starting because of the Covid-19 pandemic.

It was Dixon's 47th IndyCar win.

The victory, Dixon's fourth in Texas, leaves him just five back of Mario Andretti in second place on the all-times win list.

It was a dominating performance by the New Zealander, who ran away from the pack on a restart with three laps to go after Ganassi Racing team mate Felix Rosenqvist crashed to bring out a caution.

"It's such strange times right now, it was such a team effort," said Dixon, holding up a pair of six-shooter pistols that go to the winner. "We were just so fast.

"I'm bummed that the fans aren't here, I wish everyone was here to celebrate."

The race was run in front of empty grandstands that can seat up to 135,000 spectators at the sprawling 1.5 mile oval.

After not racing in anything other than esport events, it was a long day in the car for many drivers.

It began in Indianapolis with a medical screening and a 6.30am charter, another medical screening on landing in Fort Worth and a 2am flight home, cramming in a practice session, qualifying and a 300-mile race under the floodlights in between.

Making the return to action even more challenging were the scorching conditions with temperatures hovering close to 38 degrees celsius.

The race was also the first with a cockpit-protecting wraparound windscreen.

It all added up to a wild day with several cars crashing during practise, qualifying and the race.

Last year's pole sitter and 2017 Indianapolis 500 winner, Takuma Sato, slammed into the wall during qualifying, ending his day while two rookies had a rough baptism to oval racing with 19-year-old Dutchman Rinus VeeKay spinning down the track taking out Spaniard Alex Palou.

Earlier, Dixon topped the timesheets in the lone practice session for the race.

The 2008 Indy 500 winner bided his time but showed he had not lost any of his speed in fine conditions and high temperatures at Texas Motor Speedway.

Dixon clocked a top speed of nearly 350km/h on the second-last of the 60 laps he completed during the session.

"I probably left a little on the table, which is somewhat frustrating," he said after qualifying on the front row of the grid.

"But all three Chip Ganassi Racing cars are running well. Hopefully we can get the PNC Bank car back in Victory Lane here in Texas."