Kiwi basketballer Shalae Salmon never intended to play in America but one video changed the course of her life. 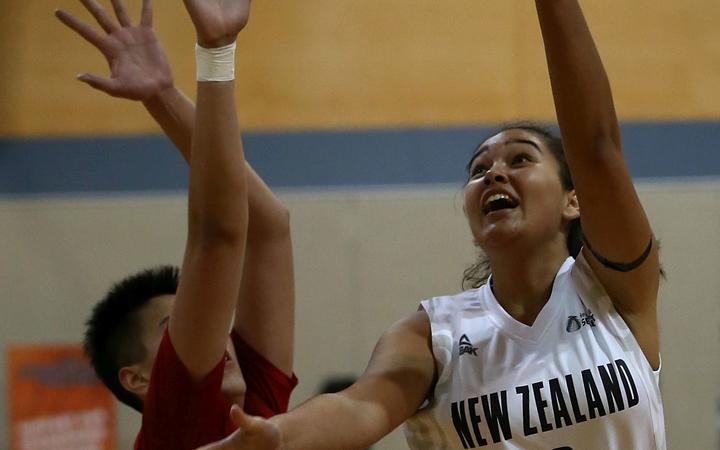 Now the Wellingtonian is planning her wedding in a pandemic and discovering she might do the one thing she said she never would - coach hoops.

In the recently concluded 2019-2020 United States collegiate season, 101 New Zealand players were at US universities with a further six playing in Canada.

Salmon, who attends Utah's Brigham Young University (BYU), was one of nine New Zealand basketballers to finish their senior year at an American college in 2020.

But the former Wellington Girls' College student had always had her sights set on university in Wellington or Palmerston North until her dad Jason intervened.

A BYU coach flew over from America to watch Salmon play and they were so impressed they offered her a scholarship.

"I wasn't planning it all, it came out of nowhere," she says.

"Right now it is really popular to go overseas and play, but at the time when I was in high school it wasn't really a thing. I knew a couple of people who had decided to go to college in the US but that was never really my plan."

Salmon has always had fellow Kiwis to share the American collegiate basketball experience with but she was the first to be recruited by BYU directly from New Zealand.

Current Tall Ferns captain Kalani Purcell was in her senior year at BYU when Salmon and Khaedin Taito, who had just transferred from the University of Southern California, joined the roster and Hamilton's Kaylee Smiler added to the Cougars' Kiwi contingent two years ago.

When Salmon arrived in mountainous Provo, Utah in 2016 she had to contend with a country that did everything backwards.

"The transition was actually kind of hard because they do everything I feel like the opposite here and basketball was the same.

"I had to learn new basketball terms, it was like I was learning a new language when I was playing basketball here in the States, because the things they would say would be the same as New Zealand but they just had different names for it.

"Once you get it down it is fine but when I first came here I was seriously lost."

A lack of culture and a different diet struck her too.

Looking back now, she says it was the "best four years of my life".

So many emotions were felt these past few days, but I want to thank everyone who has got me to where I am today. Playing for BYU was a privilege and I will never forget my time at the best university! But it doesn’t end here!! WCC TOURNAMENT, here we come!!! #letsgetthisbreadonelasttime

Salmon was the Cougars' co-captain in her final season which was cut short in early March.

Covid-19 stopped sport and the NCAA would not extend eligibility for the Cougars' seniors so Salmon's BYU playing days came to an end after 115 games.

And it was an emotional finale.

"It was actually really sad, we'd just finished our conference tournament and then we had post-season. The post-season is usually what you play for pretty much - so you play this whole season and you win all these games to make it to the post-season where you can finally get ranked in the States - and all the post-season were completely cancelled.

"For me and the people that were in the senior class it was especially hard because that was our last ride pretty much and we wouldn't be able to have a post-season again.

"I was super sad when I found out. We didn't think the last game of the conference tournament would be the last game we played, so it was difficult for sure."

Despite how her own experience ended, Salmon would encourage others to pursue a sport scholarship.

"The experiences that you have playing basketball in the US is nothing like what you're gonna have ever if you stayed and played basketball in New Zealand or Australia, so I'd definitely recommend it."

However, Salmon isn't leaving BYU yet.

Instead the 22-year-old will stay on as a graduate assistant coach for the Cougars while she completes her Masters study in public administration following on from her degree in public health.

"I always said I would never coach basketball because that's just so stressful, what my coaches have to go through having to deal with with 16 girls that have huge opinions, I didn't think I could mentally handle that," she says.

But Salmon has great admiration for her BYU coaches and teammates and she wants to work with them as much as she can.

"But I think some time in the future, down the road when I have my own kids, I think I'll start coaching."

Due to Covid-19, BYU is currently shut and any course work is done online, but Salmon has more pressing matters to deal with.

She is counting down to her July wedding to Gavin Nawahine.

Well, Christmas came early! This was the best surprise of my life! I love you Gavin #matchtogetherstaytogether

Nawahine is also a student-athlete who plays American football and the two met through his sister who was a teammate of Salmon's.

Planning a wedding in a pandemic is proving stressful - especially when Salmon's family might not be able to make the trip from New Zealand to Hawaii.

Travel restrictions might even prevent the bride and groom getting from Utah to Hawaii so Plan B is a "very small" wedding in Salmon's adopted hometown.

But she plans to make up for that with a bigger celebration in New Zealand when the time is right.

"Everything became question marks after the coronavirus stuff.

"You have no idea if things will fall through because caterers and some companies didn't want to help anymore because they didn't want to risk it, which I totally understand, it's just little things like that that are interfering with my plans."

Salmon misses her family in New Zealand a lot.

The irregular trips home over the past four years have been special.

"Once a year we would have the opportunity to go home and be with our families for month, the rest of the time we had to be here in the States, working fulltime in school and in basketball, but that was always the time of year that I most looked forward to, it wasn't Christmas anymore, it wasn't my birthday, it was that one month that we got to go home."

Now all Salmon can hope for is that her family can make the trip from half a world away in time for her next big celebration - her wedding.