When I looked around at my newly introduced teammates I immediately learnt the beauty of walking netball - it's a great leveller. 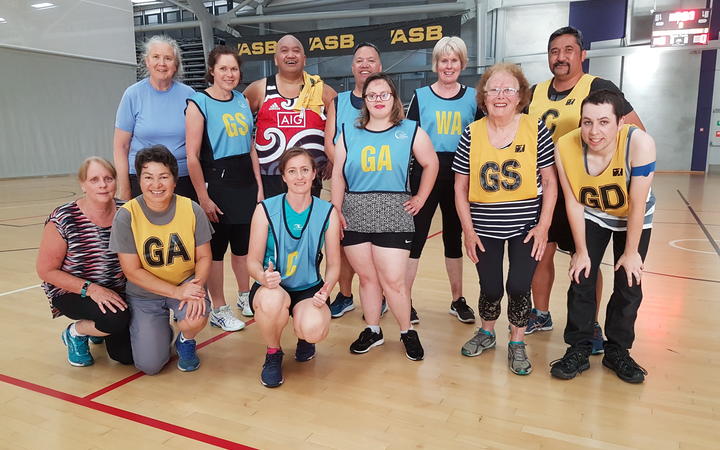 There aren't many sports where you can have an 84-year-old, a teenager, a special needs person, and mixed genders all on the same team, but you can with walking netball.

The Netball Wellington Centre has been offering walking netball for about three years now.

She said they got a whole mix of people.

"It's a family environment where sometimes we get Mum, Dad and a 13-year-old, to 80 year olds. And people with needs that when they're out in the community, they don't always fit in, whereas here they are just part of us," Sue Geale said.

Just as its name suggests - you can't run. You also can't jump.

It might sound counter-intuitive but it allows people who otherwise wouldn't have the opportunity, to play netball on some level.

It means people who have dodgy knees, are older, or are just maybe lacking in confidence, can give it a go.

Sue explained a few other rules to me.

It's the kind of environment where Sue is pretty lenient on the no running thing when people are new to it.

After just a short time with Sue, it's obvious she has a heart of gold and gets genuine enjoyment out of the smiles she sees on the players' faces.

Tessa Haanen is one of them.

Tessa is a regular, she has down syndrome, and loves shooting.

The 28-year old told me walking netball had given her a chance to get back into the sport she played when she was younger.

"I used to play netball at my old school, my mum was my netball coach. I always love netball," Tessa said.

Shirley-Anne Thomson is 84 and has been playing walking netball for about a year.

She took a nearly 60 year break from the sport after marriage and babies came along.

"I started out what they termed basketball 9-aside, then we went to 7-aside and our rep team went back to our clubs and taught them the 7-aside. Then I got married, and I had five children under seven so that was the end of my basketball life," Shirley said.

Back in her day, Shirley was a rep player.

She remembers being invited back to play in an exhibition match for the Wellington netball jubilee celebrations in the 1970s.

"And then we all sort of had to walk on one by one. I had a handkerchief given to me with a smiley face on it so I pinned that to my shorts, to my pants underneath and every time I bent over there was the smiley face."

Shirley has loved the opportunity to play again but said even she misses jumping.

"I was like a bouncing ball being a Highland dancer and I found it very hard not being able to jump.

Ten years ago Lesley Haiselden thought she had hung up her netball shoes for good after playing netball for 50 years.

But the 68-year-old started walking netball last term after she heard about it through a friend.

"It's really nice to come back and although they tell you it's walking netball, it's a good workout, especially if we are a bit short [of players], you can end up with a good sweat," Lesley said.

Having played regular netball for 30 odd years, I wasn't sure how I'd get along with no running and jumping.

A handful of the other players were like me, reasonably competitive netballers. But they wanted to help make up numbers so people like Tessa and Shirley could have fun.

It felt pretty weird at first but we were all in the same boat. And there were lots of laughs.

At one point when Tessa scored a big goal, I looked up and saw Pelesa Semu, the assistant coach of the Pulse cheer from the upper floor.

The ANZ Premiership side have office space on the upper level.

As the game wore on, what felt abnormal started to feel more normal.

Besides, netball has quite a few restrictions anyway, I guess this is just an extension of that. And you make what you want out of it. If you're competitive, it's amazing how fast you can go just walking.

We had four quarters so there was lots of swapping bibs during the breaks so people could try other positions.

I did break a little bit of sweat by the last quarter.

No one walked away from that game caring what the score was.

A few days ago Sue emailed me - she had just received an email from a woman who had recently started.

She wrote to say she was grateful for the encouragement she had received, and was "blown away by the support to get on court and remain on" and for the "opportunity to move while being part of the team."

She spent no more than five minutes on court on her first night because she was worried about falling over as she was unstable on her feet.

"That was four weeks ago," Sue wrote.

"Last Friday she was on for the whole game and was moving around the circle and shooting, smiling the whole time. Such a special way to bring a community together, this is what walking netball is all about."