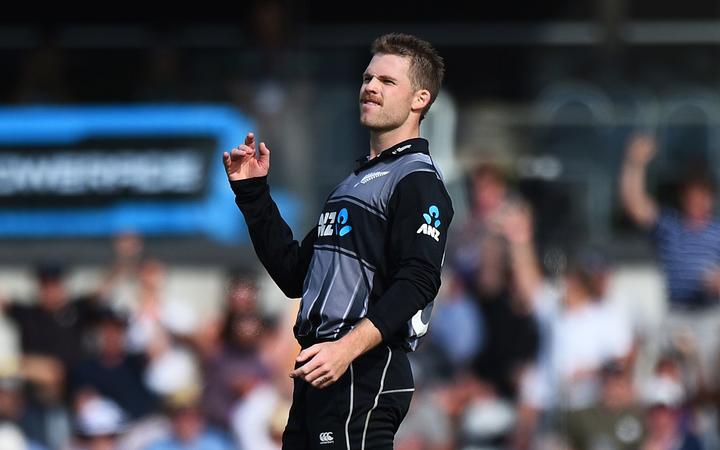 The seamer has been tested and is isolated at the Black Caps team hotel.

The three match Chappell Hadlee series is being played at empty stadiums due to the Covid-19 coronavirus.

"In accordance with recommended health protocols, Lockie Ferguson has been placed in isolation at the team hotel for the next 24 hours after reporting a sore throat at the end of the first ODI," New Zealand Cricket said.

"Once the test results are received and diagnosed, his return to the team can be determined."

Canberra and Brisbane have kicked off their NRL campaigns with round one victories over the Titans and Cowboys respectively.

The Broncos beat North Queensland 28-21 in Townsville while the Raiders crushed Gold Coast 24-6 in Canberra.

Tonight the Warriors take on the Knights in Newcastle.

The Football Ferns' April 11 match against Japan has been cancelled by the Japanese Football Association (JFA), due to concerns around COVID-19.

New Zealand Football has been in close contact with JFA over the last few weeks as the situation has escalated. Health risks, along with the challenges around border closures and self-isolation for players and staff travelling to and from Japan, have lead to this decision.

"It's very disappointing for football reasons, but we feel this is the right outcome. Coronavirus is already having a huge impact on our game, and we're monitoring what's happening very closely."

"We'll continue to take advice from the New Zealand Government, World Health Organisation and our own internal health experts as we focus on keeping our people safe," said NZ Football CEO Andrew Pragnell.

The Masters, which brings together the world's best golfers in April for the year's first major, has been postponed because of concerns about the coronavirus, Augusta National Golf Club said.

People from all over the world attend the Masters at Augusta National, which this year was scheduled for April 9-12, and the club said it hopes the postponement will allow it to host the event safely at a later date.

"Unfortunately, the ever-increasing risks associated with the widespread Coronavirus COVID-19 have led us to a decision that undoubtedly will be disappointing to many, although I am confident is appropriate under these unique circumstances," Augusta National Chairman Fred Ridley said in a statement.

The decision to postpone the event comes a day after the PGA Tour cancelled this week's Players Championship at TPC Sawgrass in Ponte Vedra Beach, Florida, and all events through April 5.

All elite football matches in England, including the Premier League, Football League (EFL) and Women's Super League (WSL) have been suspended until April 4 due to the coronavirus pandemic.

"Following a meeting of shareholders today, it was unanimously decided to suspend the Premier League with the intention of returning on April 4," the Premier League, Football Association (FA), EFL and WSL said in a joint statement.

The decision was taken after Arsenal manager Mikel Arteta and Chelsea winger Callum Hudson-Odoi tested positive for coronavirus. Everton had announced that their entire team was in self-isolation but later clarified that just one player was in that situation.

The Premier League said it aims to reschedule the affected fixtures but is unsure when action will be able to resume.

Christian Purslow, chief executive of Premier League club Aston Villa, said after the meeting that he backed the decision to suspend the league, but added it was unclear if games would resume on April 4.

The Football Association said England's friendly internationals against Italy and Denmark at Wembley on March 27 and 31 respectively will not take place.

The men's and women's FA Cup competitions have also been suspended.

Formula One plans to start its coronavirus-ravaged season in May after cancelling this weekend's opener in Australia and postponing the next three races in Bahrain, Vietnam and China.

Formula One and the governing FIA said on Friday they expected to begin the championship in Europe at the end of May, subject to regular review.

"The global situation regarding COVID-19 is fluid and very difficult to predict and its right we take time to assess the situation and make the right decisions," Formula One chairman Chase Carey said.

An end of May date would rule out the Dutch and Spanish races currently scheduled for May 3 and 10 in Zandvoort and Barcelona.

Monaco, a glamorous highlight of the motor racing calendar, is round seven on May 24.

Formula One had already postponed the April 19 Chinese Grand Prix in Shanghai.

The start of the Indian Premier League Twenty20 tournament has been postponed until April 15 as a precautionary measure against the spread of the coronavirus.

It had been scheduled to begin on March 29.

The BCCI also confirmed on Friday that India's home one-day international series against South Africa has been called off ahead of the second of three matches that was scheduled to be played in Lucknow on Sunday.

The first match in the series was abandoned without a ball being bowled due to rain on Friday.

The Indian government said late on Wednesday it would cancel almost all visas issued for travel to India until April 15 to try to prevent the spread of the coronavirus.

IndyCar has called off its season opener in St. Petersburg, Florida, due to the coronavirus, with the series announcing that all races through April have been cancelled.

Friday's announcement covers the first four races of the 2020 season.

The next scheduled race is the GMR Grand Prix on the road course at Indianapolis Motor Speedway on May 9.

The Grand Prix of St. Petersburg had been scheduled for Sunday. The three-day event typically draws more than 130,000 fans, but IndyCar had previously announced that the race would be held without spectators because of the coronavirus outbreak.

The Grand Prix of Long Beach, scheduled for April 19, had already been postponed because of a ban on large-scale gatherings in the California city.

Six Nations match between Wales and Scotland postponed due to coronavirus

Wales' Six Nations clash against Scotland in Cardiff on Sunday has been postponed due to the coronavirus outbreak, the Welsh Rugby Union (WRU) said on Friday.

"The Welsh Rugby Union has maintained an open dialogue with, and continued to seek advice and direction from, the National Assembly for Wales and other stakeholders, including the Six Nations, on this fast-moving issue," WRU said in a statement https://www.wru.wales/2020/03/wales-game-postponed.

"Whilst medical advice remains consistent, we have decided that it is in the best interests of supporters, players and staff to fall in line with recent measures taken across the UK and global sports industries."

Italy's match against England and France's game against Ireland were already postponed.

Giro d'Italia postponed due to coronavirus

Cycling's Giro d'Italia has been postponed due to the outbreak of the coronavirus, race organisers RCS Sport said on Friday.

"The organising committee of the Giro d'Italia's Hungarian stages declared the Giro's start could not be held in Hungary at the originally scheduled time," the organisers said in a statement.

"All parties have agreed that they are determined to work together to enable the Giro d'Italia to depart from Hungary at a later time."

It had been due to start in Hungary in May, a new date will be announced no earlier than April 3.