One of the country's most decorated Olympic athletes, Blyth Tait, has called time on his international equestrian career, announcing his retirement from all eventing. 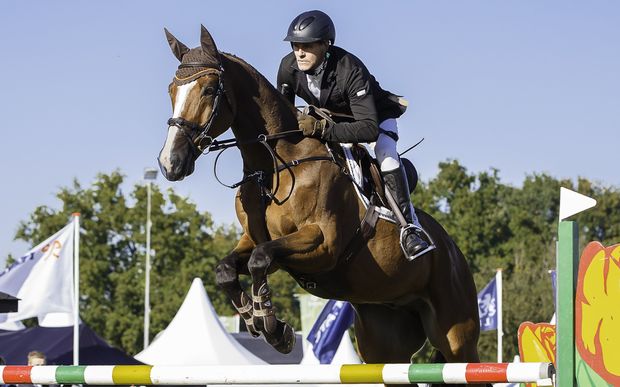 Tait, 58, announced his future plans during the Horse of the Year Show in Hastings on Thursday where he is competing in several show jumping classes.

It's a bitter sweet decision for Tait who only last year was eyeing a possible comeback berth at Tokyo, but a less than satisfactory build-up has left the four time medallist pulling his hat out of the selection ring.

"The likelihood of me competing again overseas is unlikely, I'm very happy to hand over the reins to the younger ones coming through and I support them fully," Tait said.

"There is a bright future and still some serious young talent out there."

Whangarei born Tait had horses coursing through his veins from an early age.

By 1992 he held the World No 1 ranking, a position he maintained for a decade - at the height of his career eclipsing even Sir Mark Todd.

"To have been successful for so long, I can look back with satisfaction. But it does take an enormous amount of hard work and 110 percent commitment, now that I'm older it's hard to sustain."

Tait is of one of only four New Zealanders to have won at least four Olympic medals and was awarded the Lonsdale Cup by the New Zealand Olympic Committee in 2001.

A Halberg team award member in 1998 and team flag-bearer at the 2000 Sydney Olympic Games left little for Tait to tick off, not surprisingly he has a few fond memories.

"Winning the World Championship for the first time in Stockholm was surreal, I was new to the international scene on a horse that came from Northland.

"It was everybody's dream to go to other side of the world and win, that was the icing on the cake. Eight years later, I won the World Champs again in Rome which was even more satisfying once you know what it takes to achieve that, and realise the enormity of it. Both World Champ wins were very significant in my career as they enabled me to become a professional.

"But the Olympic gold medal - that's the pinnacle. Representing New Zealand on a bigger scale would have to be my biggest achievement."

Whilst eventing is no longer on the radar, Blyth is still keen to pursue his love of showjumping for "a bit of fun".

"I'm out there to have a bit of fun… put it this way, if it's raining I will be going home!"

Equestrian Sport New Zealand's Warrick Allan said what Tait had done for the sport had been inspirational.

"Blyth was a fierce competitor, he was never one to not give 100 per cent and always fought hard even when things may not have been going to plan," Allan said.

"He was always his worst critic and able to admit mistakes made, but ensured he learnt from them."