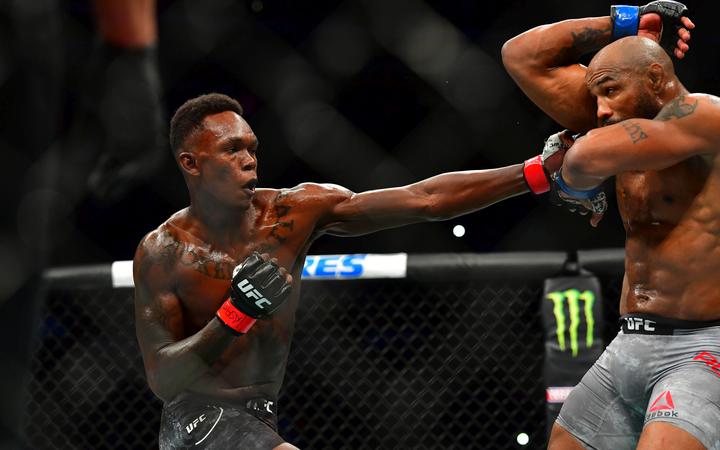 The Nigerian-born Aucklander defended his UFC middleweight championship title with a unanimous points win in Las Vegas, but fans booed both athletes during and after the fight.

While Adesanya might have captured New Zealand's attention with his breakthrough Halberg Award last month, the plodding nature of this fight probably had new fans scratching their heads over what the fuss is about.

In the first round Romero stood almost dead still for the first minute and a half and barely any strikes were landed.

Adesanya's fight plan revolved around keeping his distance and targeting Romero's legs with kicks, which meant for a tentative first three rounds. The only really notable moment was an accidental eye poke by Adesanya on Romero that saw the fight stopped as the Cuban was seen to by a doctor.

By the fourth, Adesanya had done enough and let a desperate Romero charge at him to no avail, as all he had to do was get out of the way.

Dana White said the bout was terrible and blamed Romero for the lacklustre showing.

Adesanya said afterward "I did what I had to do."

Adesanya said he was expecting more of a fight.

"I'm waiting for this surge of something but yeah it takes two to tango but I was the only one winning the dance.

"I could have got bored in there, I was starting to get bored a little bit so you get bored and he explodes on you. So for me, like my coaches said 'you need 25 minutes of absolute focus, don't get bored, don't get lulled' so for me I stayed focussed the whole time.

"He plays the game and lulls to get you into a false sense of security. I was hoping to touch him more but that's hard with someone who doesn't want to dance with you."

Adesanya said at least Costa would bring more of a challenge.

The fight was preceded by possibly the best women's title fight in UFC history. Zhang Weili of China and Poland's Joanna Jędrzejczyk landed more punches than Adesanya and Romero in the first 30 seconds of their five round epic, with Zhang coming out on top on a split decision to defend her strawweight title and improve her record to 21-1. She dedicated the win to her home nation and those affected by the coronavirus outbreak.