Latest - The New Zealand women's football team has come back down to earth at the Algarve Cup in Portugal. 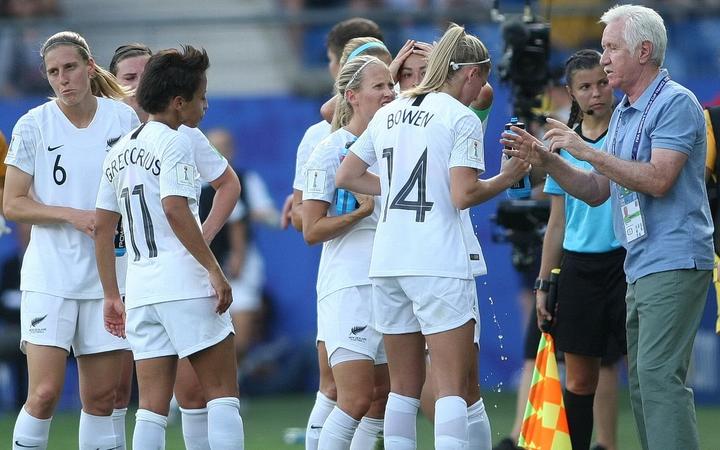 The Football Ferns have been beaten 3-0 by Italy in the semi-finals, three days after the high of their penalty shoot-out win over Belgium.

Italy led 1-0 at halftime, courtesy of a 20th minute goal and their goalkeeper who denied Rosie White from the spot in time added on.

The Italians added a further two goals in the 56th and 67th minutes to stamp their superiority.

Norway lost four-nil to Germany in its semi-final.

Tries by Anthony Watson, Elliot Daly and Manu Tuilagi drove England to a more convincing victory over Wales than the 33-30 scoreline suggested, but what the result means for the coronavirus-hit Six Nations championship remains to be seen.

England led 20-9 at the break and looked to be running away with the game at 33-16 up after an hour but, down to 13 men after a yellow card for prop Ellis Genge and a red for centre Tuilagi for a dangerous tackle, they were cut open by the defending champions for two late tries.

England's third successive victory takes them to 13 points, level with unbeaten France, who play in Scotland on Sunday. Ireland are on nine points, also with two games remaining.

For Wales, it was a third successive defeat, a year after winning the Grand Slam.

England will now have to wait for a rearranged date for their final game in Italy, hoping that France slip up in one of their last two games to open the door to the title.

The New Zealand men's sevens team has made a commanding start to the world series tournament in Vancouver.

The All Blacks Sevens have beaten Kenya 29-0 in their opening group match, after leading 17-0 at halftime.

Vilimoni Koroi scored two tries for New Zealand in his return to the side, while Joe Ravouvou, Tone Ng Shiu and Caleb Clarke also crossed the line.

In their final pool play game the All Blacks Sevens were tested by Ireland but prevailed for a 33-24 win.

They will now play in the quarterfinals on Monday morning.

Runaway Premier League leaders Liverpool resumed normal service with an unconvincing 2-1 victory over relegation-threatened Bournemouth but they had to recover from an early jolt at Anfield.

Goals in quick succession by Mohamed Salah and Sadio Mane before halftime calmed the jitters after Callum Wilson had given Bournemouth a surprise ninth-minute lead.

It was far from vintage Liverpool, however, and they struggled to finish off a Bournemouth side who almost grabbed a late equaliser through Wilson.

Three defeats in their last four matches in all competitions had given Liverpool a reality check, even if only serial pessimists among their fans truly believed they might blow their first title for 30 years.

It is still a matter of when, not if, Jurgen Klopp's men seal the deal.

Three more wins and they will be crowned champions.

Sheffield United's beaten bottom of the table Norwich City 1-0 to rise to sixth, level on points with fifth-placed Wolverhampton Wanderers who have been held to a 0-0 draw by Brighton & Hove Albion.

New Zealand boxer Tasmyn Benny has been knocked out of the Asia/Oceania Olympic qualifying tournament in Jordan.

Benny has been beaten by second seed Mery Kom Hmangte of India in the women's flyweight division.

Fellow kiwis David Nyika and Leuila Mau'u will fight in the quarter-finals tonight.

Nyika, who is the second seed in the men's heavyweight division, will meet Syria's Alaa Aldin Ghousoon for the place in the semi-finals.

Mau'u will then meet third seed Justin Hustis of Australia in the men's super heavyweight division.

Marnus Labuschagne's first one-day international cricket century for Australia proved to be in vain as South Africa breezed to a six-wicket victory in Potchefstroom and a clean sweep of the three-match series.

After being sent into bat, Australia posted a below-par 254 for seven in their 50 overs, with South African-born Labuschagne hitting a run-a-ball 108 to bolster an otherwise mediocre effort from the visitors.

The home side always looked in control of their chase, JJ Smuts playing the anchor role with a career-best 84 and ably supported by other new faces Kyle Verreynne (50) and Heinrich Klaasen (68 not out) as they romped to victory with 27 balls remaining.

South Africa continued their recent dominance of Australia in this format having won 11 of their last 12 ODI meetings dating back to 2016.

Former Tall Blacks centre Sean Marks has made a big move as general manager of the Brooklyn Nets NBA franchise.

Marks has announced the Nets have parted ways with head coach Kenny Atkinson and assistant Jacque Vaughn will take charge for the rest of the season.

Atkinson made his NBA coaching debut with the Nets in 2016 and leaves after nearly four seasons, with the team seventh in the Eastern Conference and still in contention for a playoff spot.

"After discussions with Kenny about the progress of the season, we mutually agreed that a coaching change would be in the best interest of the team," Marks said in a statement.

"This was an extremely difficult decision, however the organization believes it is one that is necessary at this time.

"Kenny was instrumental in developing our players and building the identity and culture we have become known for over these past four seasons. The foundation he helped put into place here is one that we will continue to build on in the coming seasons."

NBA superstar against potential fan ban due to Covid-19

Los Angeles Lakers forward LeBron James has said he will not take to the court if the NBA bars fans from attending games to limit the spread of the coronavirus.

American media reported that the NBA has sent a memo to teams detailing the need for contingency plans in case it becomes necessary to play games with only essential staff present.

Italy, one of the worst-hit countries after China where the outbreak began, is staging matches across different sports without spectators in attendance.

"Play games without the fans? No, that's impossible. I ain't playing," James told reporters after the Lakers beat the Milwaukee Bucks 113-103 on Friday to clinch a playoff berth.

"That's who I play for. I play for my team mates, I play for the fans, that's what it's all about. If I show up to an arena and there are no fans in there, I ain't playing. They can do what they want to do," added the 35-year-old James, who is widely regarded as one of the best basketball players of all time.

In a memo sent to the league's 30 teams this week, the NBA said it was closely monitoring the situation and had advised players to fist-bump with fans instead of high-fiving them and avoid taking items to autograph.

The women's world ice hockey championship set for this month in Canada, has been cancelled over concerns about the coronavirus outbreak.

"Due to the ongoing spread of the coronavirus (COVID-19), the IIHF Council has agreed today to cancel the 2020 IIHF Ice Hockey Women's World Championship, following a recommendation by public health experts," the International Ice Hockey Federation (IIHF) said in a statement posted on Twitter.

"Subject to formal approval by the IIHF Congress, the 2020 host cities Halifax and Truro will instead host the 2021 IIHF Ice Hockey Women's World Championship."

It is the second time the women's event has been cancelled due to a global epidemic.

The 2003 championship in Beijing was called off due to the SARS outbreak in China.

Barcelona marathon moves because of coronavirus

The Barcelona marathon scheduled for next weekend has been postponed until October to stop the spread of the coronavirus, Barcelona's city hall said in a statement.

The race was due to take place on March 15 but has been rescheduled for Oct. 25 following a meeting between the city hall's sport department and local and regional health authorities.

Spain's health ministry has reported 441 cases of the virus, leading to eight deaths. One hundred and seventy four cases have been reported in Madrid, with 24 in Catalonia.