The White Ferns are out of the Women's T20 Cricket World Cup after a four-run loss to Australia at Melbourne's Junction Oval. 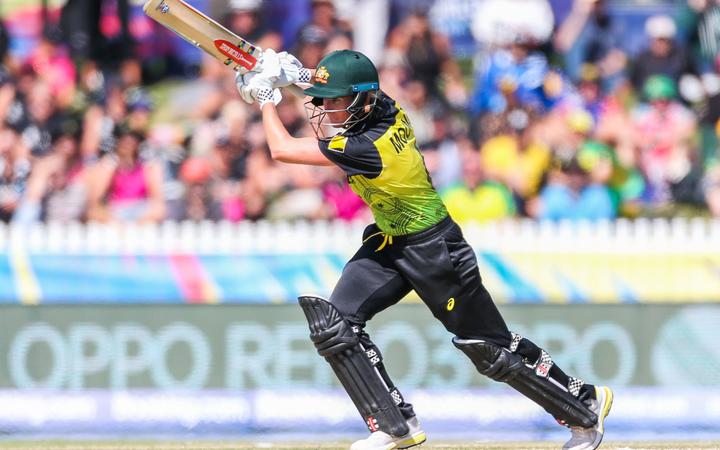 In a sudden-death trans-Tasman battle to secure a semi-final spot, White Ferns skipper Sophie Devine won the toss and sent Australia in to bat.

Australian captain Meg Lanning and Ellyse Perry were the next highest scorers on 21 runs.

For the White Ferns Anna Peterson was the pick of the bowlers, finishing with figures of 2-31.

If the White Ferns had won it would have been the fourth-highest successful run chase in women's T20 World Cup history.

In their run chase the New Zealanders were on pace with Australia's score after the powerplay.

As wickets fell, contributions from Devine (31), Maddy Green (28) and Katey Martin kept the White Ferns in the game.

Needing 10 runs to win from the final ball, the White Ferns finished off with a six.

The victory may have come at a cost for Australia with allrounder Perry leaving the field grabbing her hamstring.

Perry was already an injury cloud in the lead-up to Monday's game because of a hip injury suffered against Bangladesh, but took her place in an unchanged Australian line-up for their last pool game of the competition.

Perry has not missed a T20 World Cup game for Australia since the first edition of the tournament in 2009.

Australia advance for their shot at a fifth World Cup title alongside unbeaten India from group A, joining England and South Africa from group B in this week's semi-finals at the Sydney Cricket Ground.