Feature - Every year the referee of the Scottish Cup football final in May tosses a New Zealand coin to determine the ends. It is an act few Kiwis will realise the significance of, nor of its relation to the fight against Nazism. 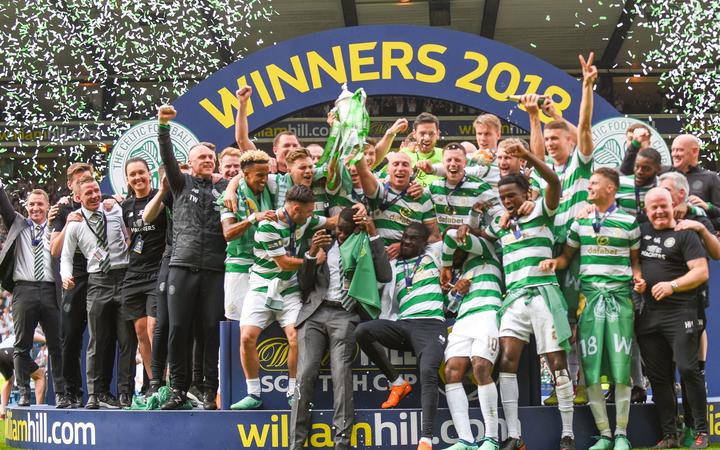 Celtic FC are the most successful club in the Scottish Cup, winning it 39 times. Photo: AFP

The plaque and the $1 coin was a token of thanks for the generosity and hospitality shown to the New Zealand servicemen stationed close to Glasgow during the war.

As the (Dundee) Evening Telegraph notes in an article from its 4 March 1946 edition:

"Made by the referees who used to play in Scotland, the plaque contains silver mountings of the North and South Island and the British Isles, with a silver mounted replica of a football in the centre.

"In the ball is a New Zealand penny, and a letter accompanying the plaque asks that the penny be used for the toss in the Scottish Cup final."

The newspaper also noted that a tunic badge carrying the inscription of the New Zealand Referees' Association was also forwarded, with the hope that it would be worn by the referee controlling the final at Hampden Park.

According to Gary Hilland, secretary of the GRA, this connection was made at the end of the war.

"My understanding is the tradition was started when New Zealand servicemen were stationed in Glasgow at the end of World War II."

Hilland says that as silver dollars are no longer in circulation in New Zealand, they have to be bought from NZ Post.

"We have kept the tradition going all these years purchasing a few coins every three or four years due to the costs involved. The referee keeps the coin used for the match, although I'm not entirely sure they are aware of the actual value of it!"

New Zealand joined the war when Britain did providing and were particularly involved in the battles in Egypt, Italy and Greece. New Zealand soldiers are also known to have landed in Scotland nearer the beginning of the conflict, in 1940.

The soldiers, part of the Second Echelon of the 2nd New Zealand Expeditionary Force, were diverted to Britain en route to Egypt because of the imminent threat of invasion by Germany which was in the minds of Churchill and his generals following the fall of France.

The Second Echelon, which included the 28 (Māori) Battalion, initially landed along the Clyde and was to spend six months in the UK.

However, by October 1940 the threat of a cross-Channel invasion had abated and the men engaged in extracurricular activities, including sport and Christmas festivities.

The inspiration for the plaque and coin could be attributed to George Jackson, long the doyen of the New Zealand Referees' Association who left Glasgow in 1926 at the age of 19 for New Zealand where he became a referee and later a top official.

A New Zealand penny was also used by the referee in the first post-war FA Cup final at Wembley Stadium between Derby County and Charlton Athletic on 27 April 1946.

With thanks to the Kippenberger Research Library of the NZ National Army Museum Te Mata Toa, NZ football historian Barry Smith, the Professional Historians' Association of New Zealand, the Scottish Football Museum, and Gary Hilland of the Glasgow Referees Association for providing information for this article.

*Craig Stephen is a part-time bulletin editor at RNZ who hails from Scotland.