Captain Sophie Devine has led the New Zealand women's cricket team to a seven wicket win over Sri Lanka in its opening match of the Twenty20 World Cup in Perth. 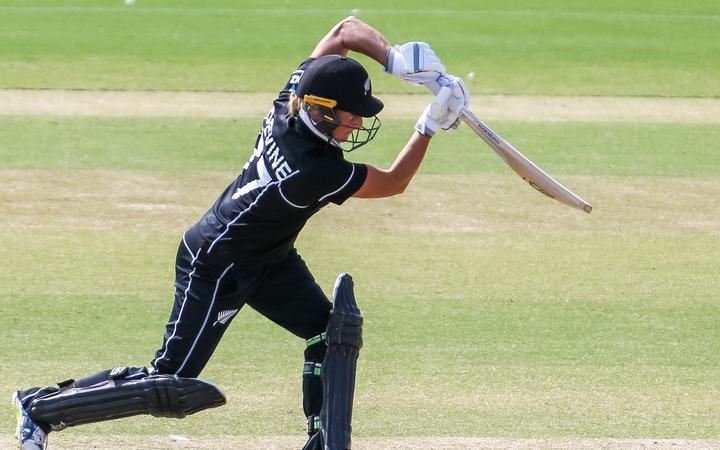 Opening the batting, Devine has struck an unbeaten 75 to chase down the 128 runs required for victory with 14 balls to spare.

It was her sixth straight half-century in T20 cricket.

Earlier, openers Chamari Athapaththu and Hasini Madushika played an array of unorthodox shots to give Sri Lanka a brisk start with a stand of 60 but then Hayley Jensen's bowling spell of 3-16 put paid to their hopes of a big total.

Captain Athapaththu was out after an entertaining knock of 41 off 31 balls but her dismissal allowed New Zealand's bowlers to slow down Sri Lanka's momentum and restrict them to 127-7.

New Zealand's Devine hit six fours and two sixes in her 55-ball knock while Maddy Green also played a useful cameo role with 29 off 20 balls to help her side up their scoring rate.

Sri Lanka paid heavily for dropping Devine twice and wasting a total of three simple chances as they fell to their 10th straight loss in the format.

In the earlier match West Indies captain Stafanie Taylor helped her side to a seven-wicket win with an all-round display against Thailand, who showed they are no pushovers during an impressive global debut.

The Thais, who came through the World Cup qualifiers to join the top nine teams for the tournament, struggled to score freely after choosing to bat against a strong West Indies bowling attack at the WACA and managed a paltry 78-9 in 20 overs.

The 28-year-old Taylor was the most successful with the ball with figures of 3-13 from three overs but also needed to top-score with an unbeaten 26 for the 2016 champions, after they were reduced to 27-3 inside seven overs in their chase.

Taylor received able support from wicketkeeper Shemaine Campbelle, who made 25 not out, and the duo added 53 for their unbroken fourth-wicket stand to take West Indies to their first win in nine T20 matches with 20 balls remaining.

Thailand's players were no match for the West Indies side in batting power and skills but they showed lots of enthusiasm and determination with the ball combined with sharp fielding.

West Indies opener Lee-Ann Kirby, in her first international after 12 years, was run out for three to a direct hit from Naruemol Chaiwai while batting mainstay Deandra Dottin was also found short of her crease while attempting to steal a run.