After two years out injured Queenstown snowboarder Tiarn Collins has returned to competition with a World Cup victory in Calgary.

Collins injured his shoulder just days out from the 2018 winter Olympics in PyeongChang and has been battling to return to top form since.

The signs were good that Collins was returing to form when he finished fourth in qualifying in a field of 50 riders featuring some of the some of the world's best.

Opening with a new trick, a switch back 270 on to forward, Tiarn put down a tidy rail line but it was on the jumps that he earned top marks despite a near miss on the cab 1440 nosegrab on the very last jump.

"I almost over rotated, I had to fight to hold on to it and was literally holding my breath right to the end," he said. 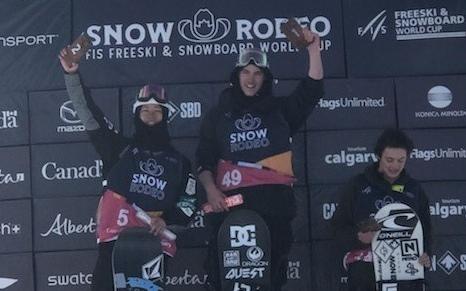 Tiarn Collins on the podium after his win in Calgary. Photo: Snowsport NZ

McGregor has won her third victory on the Freeride World Qualifier Tour in Montafon, Austria with Maria Kuzma just behind in third place.

The victory assures McGregor a place on the full tour next year.