Margaret Court has criticised Tennis Australia (TA) following her awkward appearance at the Australian Open last week, saying the governing body had "discriminated" against her due to her opposition to gay marriage. 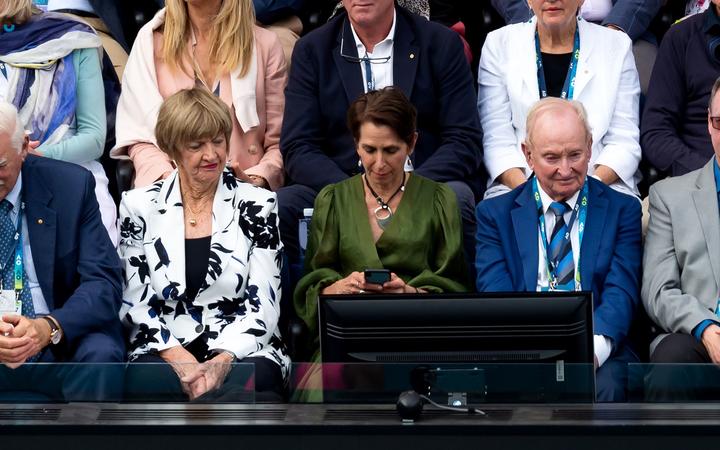 Margaret Court (centre-left) and Rod Laver (centre-right) are seen in the stands during round four of the Australian Open Tennis on January 27, 2020. Photo: Icon Sportswire

Tennis Australia (TA) invited Court, who won a record 24 Grand Slam titles, to Melbourne Park to recognise the 50th anniversary of her 1970 calendar Grand Slam, while saying it disagreed with her "personal views".

In a low-key ceremony at Rod Laver Arena prior to a quarter-final match, Court was handed a replica trophy by 11-times Grand Slam champion Rod Laver following the screening of a short video of her tennis achievements.

Court, who attended several days of the tournament along with family members, said she had been treated unfairly because of her views on "gay marriage and all of those areas", and complained about not being given a microphone at the ceremony.

"From the tennis side they've pointed the finger at me and tried to discriminate in everything that I've done and I think that's very sad," the 77-year-old told local broadcaster Nine Network.

"I think they think because I'm a preacher, they think I'm going to preach the gospel."

TA responded by saying that Court had agreed to the ceremony's arrangements beforehand and that the governing body had extended hospitality, including more than 100 free tickets, to her and her family.

"We are very disappointed to hear now of her complaints, none of which were expressed to us during her time at the Australian Open," TA said in a statement.

"Tennis Australia invited Margaret and (husband) Barry Court, along with 16 members of their family, to the two weeks of the Australian Open.

"TA covered the cost of flights, accommodation, breakfasts and executive club access, for the family, along with hospitality at the event, which included more than 100 tickets over the two weeks."

"I'd never go to another nation, whatever I thought of a person, I would never say, 'hey, you should take their name off a building or off an arena, or a tennis centre," Court said.

"I think that was very, very wrong."