For the second time in as many matches, India have beaten the Black Caps in a super over during the fourth Twenty20 at Wellington Stadium. 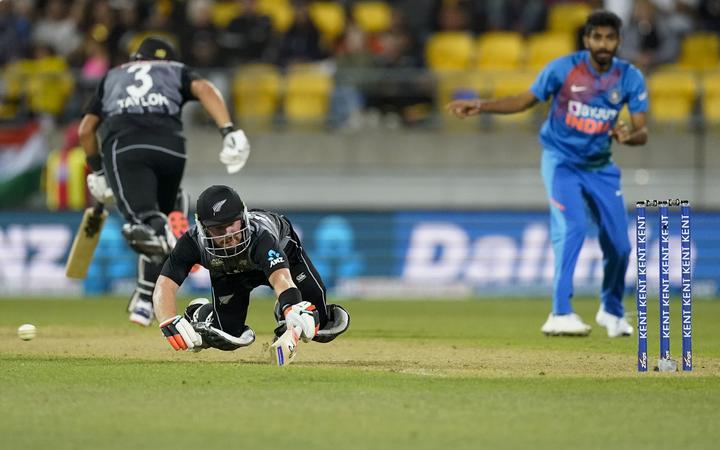 Tim Seifert makes his ground during the T20 between India and the Black Caps in Wellington. Photo: Photosport

In New Zealand's over, Tim Siefert, Colin Munro and Ross Taylor mustered 13 runs for one wicket off the bowling of Jasprit Bumrah.

With 14 required for victory, India's KL Rahul hit a six and four off the first two balls of Tim Southee's bowling in their super over to reduce the visitor's target to just four.

Rahul went the next ball though when he pulled a short ball straight to Scott Kuggeleijn on the square leg boundary.

It was of little consolation for the Black Caps though, India captain Virat Kohli came to the crease and snuck a quick two runs and then a four past midwicket to seal the victory with a ball to spare.

It was another disappointing end for the New Zealanders who appeared to be crusing to victory in the back end of their innings.

The home side required just 26 runs from the last four overs with Tim Siefert and Ross Taylor at the crease.

However, requiring just seven off the last over to win, the Black Caps lost four wickets on their way to scoring six runs, forcing the super over.

Siefert finished with 57 after being run out in the final over, while earlier Colin Munro scored 64.

Manish Pandey was the pick of India's batsmen, notching up an unbeaten half century off 36 balls.

India had already wrapped up the series the match before in Hamilton, but now lead the series 4-nil. The final T20 is at Bay Oval in Mount Maunganui on Sunday.