Super Rugby has adopted an air quality policy ahead of Friday's season-opening matches in the wake of the bushfires that have caused havoc across Australia, organisers SANZAAR said. 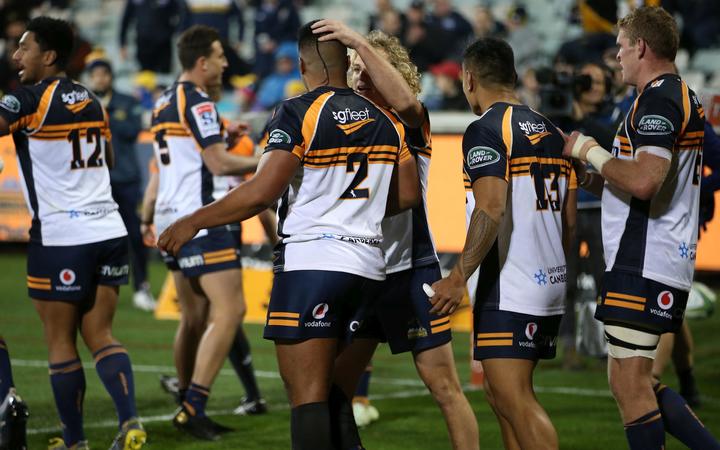 Brumbies hooker Folau Fainga'a is congratulated for one of his 11 tries during the Super Rugby season. Photo: Photosport

The bushfires have killed 33 people and about 1 billion animals since September, while 2,500 homes and an area the size of Greece have been destroyed.

Super Rugby kicks off with New Zealand's Auckland Blues hosting the Waikato Chiefs but it is Friday's second game in Canberra between the ACT Brumbies and Queensland Reds that is of more concern for organisers.

The smoke that shrouded Canberra in December, forcing the cancellation of a Twenty20 cricket match and Super Rugby's Brumbies to move their pre-season training to Newcastle for 10 days, has returned this week.

"It has been an extraordinary summer in Australia to date and we deeply sympathise with all those individuals and communities who have been impacted by the bush fires," SANZAAR Chief Executive Andy Marinos said in a statement.

"Naturally, the continued welfare of our players and indeed spectators is a priority for us should such incidents continue to affect the Australian landscape.

"It is therefore prudent of us to put in place these guidelines with our stakeholders."

The new policy would take into account particulate matter at the match venue, the Air Quality Index, weather forecasts and other environmental factors at the venue, as well as if players are exhibiting signs, or reporting symptoms, of distress.

The decision whether a game goes ahead would be made by a panel of medical staff, match officials, venue operations staff and Super Rugby administrators.

Under SANZAAR rules, if conditions are deemed unsafe before kickoff or during the first half and the game is abandoned then the match is declared a draw and the four competition points shared.

If a game is abandoned at halftime or during the second half then the result stands.

Only two Super Rugby games in the competition's 25-year history have been cancelled.

Last year, the Canterbury Crusaders match with the Otago Highlanders was cancelled following a mass shooting in Christchurch.

A Crusaders game against the Wellington Hurricanes was also cancelled following the 2011 Christchurch earthquake.