The Black Caps have fallen to a 2-0 deficit in their home T20 series against India. 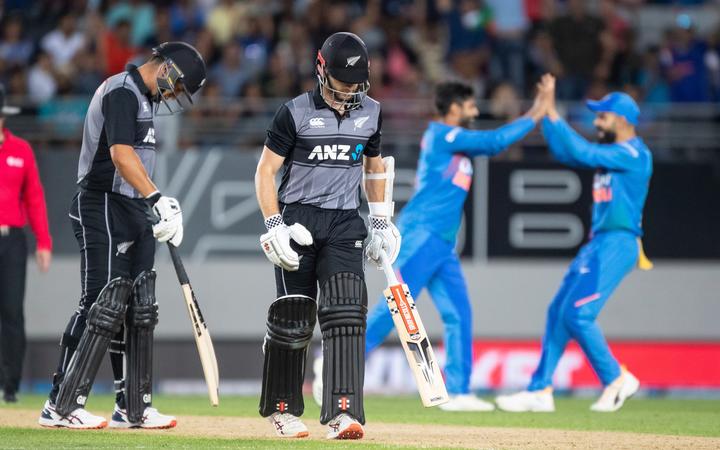 New Zealand have been comfortably beaten by seven wickets in the second of five matches at Eden Park in Auckland on Sunday night.

The defeat, the Black Caps fifth in a row following their 3-0 Test series loss in Australia, comes after the tourist's six-wicket victory in the first match of the series at the same venue on Friday.

Chasing just 133 to win after the home side struggled to generate ascendancy with the bat, India were hardly troubled in reaching their target with 15 balls to spare.

Opener KL Rahul and rising talent Shreyas Iyer, as they were in match one, were again to the fore.

Rahul paced the innings expertly to finish not out on 57 from 50 balls, while Iyer gave the almost 18,000 in attendance a further glimpse at his huge potential.

The 25-year-old mixed power with precision in making an entertaining 44 off 33.

Earlier, New Zealand were unable to capitalise on a good start and battled their way to 132-5 on a pitch with less pace in it than the series opener.

Opening pair Colin Munro and Martin Guptill put on 48 together before the latter fell victim to that slower surface, gone for 33 off 20 balls from the last ball of the six-over powerplay.

Munro (26 off 25) and Colin de Grandhomme (3 off 5) were also dismissed when getting through their shots too early.

The Black Caps attempts to gain some momentum took another blow when Kane Williamson was out for 14, the captain hitting a sweep shot straight to the fielder in the deep to reduce the hosts to 81-4 in the 13th over.

At that point, Tim Seifert and Ross Taylor were happy to prevent any further damage.

Even, though, when they did try to launch after a couple overs of consolidation, anything more than ones or twos were hard to come by.

In fact, New Zealand managed just one boundary in the last four overs, Seifert launching Jasprit Bumrah for six off the penultimate ball of the innings to take the score past 130.

Seifert finished unbeaten on 33 from 26.

But 132 was always likely to be not enough against a powerful Indian batting line-up, and so it proved.