The Silver Ferns were tested in a tight 48-41 win over South Africa at the Netball Nations Cup in England on Sunday. 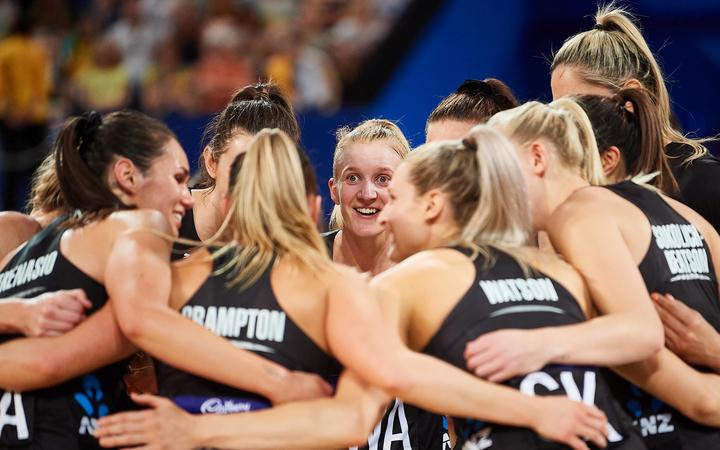 After posting comfortable 16 and 26-goal wins over England and Jamaica respectively, the Silver Ferns were forced to dig deep against the winless South Africans before going on to complete a clean sheet through the round robin matches.

South Africa got out to a two-goal lead early, but at the end of the first quarter the Silver Ferns were ahead 14-11 as the new shooting combination of captain Ameliaranne Ekenasio and Maia Wilson continued to flourish.

Karin Burger came on at goal defence against her country of birth and paired well with Jane Watson as the Silver Ferns went on a four-goal unanswered streak to open the second quarter and extend their lead.

The in-circle defensive pairing of Zanele Vimbela and Karla Pretorius proved effective spoilers against the New Zealand shooters but the Proteas could not make the most of their opportunities.

The Silver Ferns were more effective in converting their turnovers to build on their buffer when taking a 27-20 lead into halftime.

After the break, with shooters Ine-Mari Venter and former Southern Steel and Waikato Bay of Plenty Magic player Lenize Potgieter finding their range under the hoop, the Proteas chipped away at the scoreline.

Sinking their goals and continuing to disrupt the Silver Ferns flow, South Africa showed their credentials when levelling up the scores late in the piece.

A late rally from New Zealand helped to keep their noses in front despite being restricted to just 10 goals for the quarter.

"It was really torrid and very physical out there and defensively, I thought South Africa were sublime and really took it to us," Silver Ferns coach Dame Noeline Taurua said afterwards.

"I'm glad that we were able to grind it out. We had some inexperienced players out there which is going to be really valuable for us moving forward."

The Silver Ferns will play the winner of the game between England and Jamaica in the final of the tournament on Monday morning.