Dame Valerie Adams has thrown 18.65m in the women's shot put at the Potts Classic in Hastings, to qualify for the 2020 Tokyo Olympics. 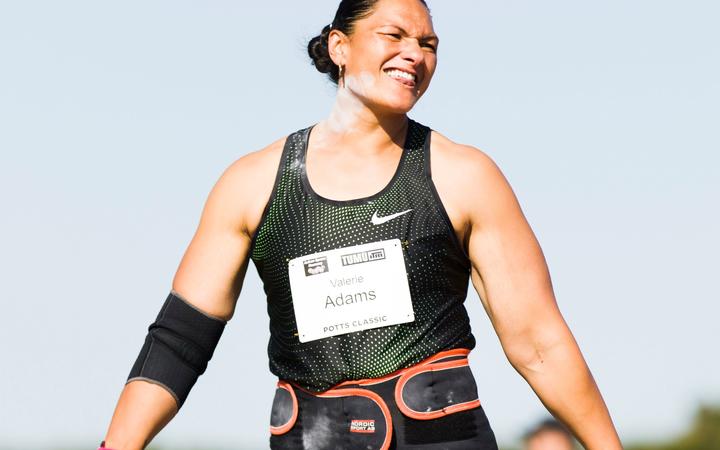 In her first competition in 20 months after taking time out to have her second child, Dame Valerie bettered the Tokyo Olympic Games entry standard of 18.50m.

"My life has changed dramatically [from 20 months ago] but it has been an amazing journey for me but to be able to come out here and keep my nerves and my anxieties under control and to have a good solid stable competition was pretty awesome but to also tick off the qualification marks for World Indoors and the Tokyo Olympic Games was even better so I'm pretty pleased."

She also met the entry standard (18.30m) for the World Athletics Indoor Championships coming up in March.

It's the fifth time Dame Valerie has qualified for the Olympics. She has won two golds and one silver medal in shot put at previous Olympics.

Dame Valerie said she was pretty happy with how the day's competition went.

"I posted up a good distance today. It was pretty consistent so I can't complain, but this is our first time in 20 months out here so watch this space.

"We had two goals to come out and achieve today and that was to qualify for World Indoor Championships in Nanjing in March and also for the Olympic Games in Tokyo, so it's pretty awesome to do it on my first competition. That kind of takes the pressure off just a little bit and I just hope to build more on this at the next comp, which is going to be at Porritt Classic on the 15th February," she said.

"Definitely, I was expected to qualify today whether I liked it or not, that was the goal. Like anything, whatever it takes to achieve your goal, and those were our two goals today."

She said it was a no brainer for her to return to the sport.

She said since having children her preparation for competition had changed.

"It has changed dramatically how this preparation has gone ...there's physical challenges that come with that and quite challenging having to juggle being a mum and being an athlete at the same time but thankfully for me I've got a great support network around me."

Earlier in the day, 2018 Commonwealth Games Gold Medallist Julia Ratcliffe came from behind to win the women's hammer throw with a final round effort of 69.94m. Second was Lauren Bruce of Canterbury with a new PB throw of 67.87m, with Nicole Bradley of Auckland in third with a best throw of 66.72m.

Connor Bell was first in the senior men's discus with a best throw of 63.25m, a new personal best with the 2kg discus for the 2018 Youth Olympic Games gold medallist. Alexander Parkinson was second with 58.31m and Marshall Hall third with 55.64m.

Still to come this evening, Tom Walsh will compete in the senior men's shot put, and Zoe Hobbs and Edward Osei-Nketia in the 100m finals.