New Zealand Sevens rugby will come of age this weekend as it celebrates its 21st birthday at the World Rugby Sevens tournament being played in Hamilton. 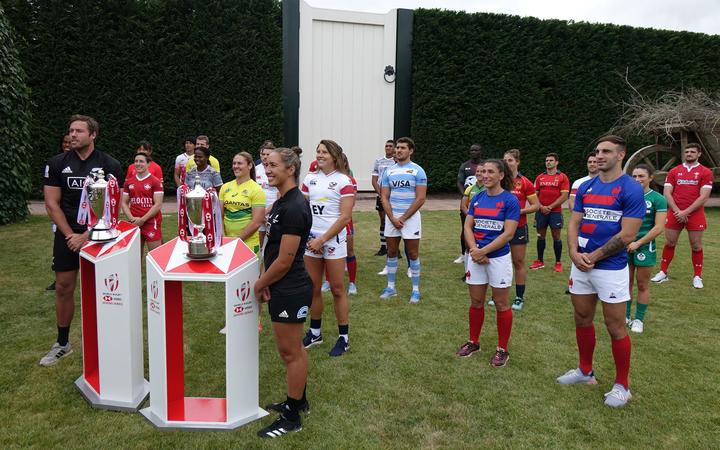 The captains of the 28 teams that will play in the tournament. Photo: RNZ / Andrew McRae

Twenty-eight teams will take part in the first fully integrated men's and women's international tournament to be played in New Zealand.

Both the All Blacks Sevens and the Black Ferns Sevens teams come to Hamilton victorious from the previous round held at the end of last year in Cape Town.

All of the 28 teams have now arrived in Hamilton.

The teams have spread out around the city making time between training to promote the game and visit hospitals, rest homes and get involved with younger players.

Stacey Fluhler, who has been a Black Fern since 2015, said playing before a home crowd definitely had its advantages.

"I just feel that when you run out you get more goosebumps, you get more excitement, knowing that you are at home representing your country and pretty much the crowd mostly cheering for you."

Fellow Black Fern Gayle Broughton has been in the squad since 2014.

She said she was living the dream of being a professional rugby player.

"I see it as kind of just leaving mana in my wake for me. You know there are a lot of kids especially where I come from and where I grew up who get it tough you know, but just showing that you can make it out of anywhere no matter what your background, no matter where you grew up."

The stakes will be raised for all teams during pool play with successful teams advancing to the cup semi-finals, rather than contesting traditional quarter-finals. 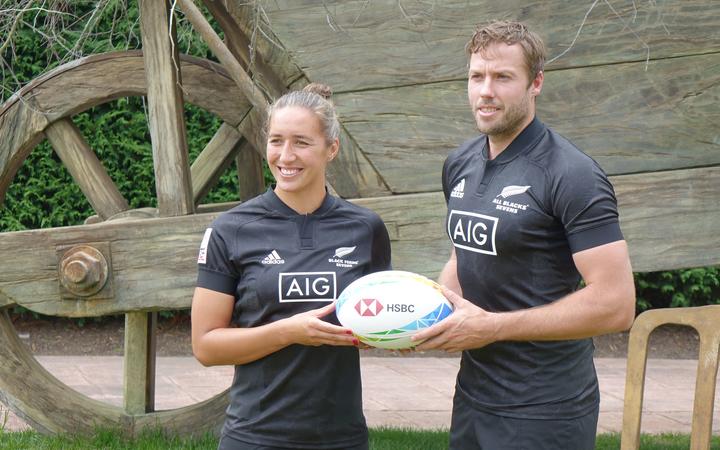 All Blacks Seven co-captain Tim Mikkelson said because of the change in format this year, the matches would be intense right from the start.

"If you lose a game you're gone really. So we really need that support out there from our home fans and you know our first game is against Wales and we can't look too far ahead because if you do you will lose and like I said there are no quarter-finals and the pressure is on."

The other co-captain, Scott Curry said the team was on a high after winning in Cape Town, but the nature of Sevens rugby meant nothing could be taken for granted.

"Sevens is pretty hard and pretty ruthless, so can't really rest on your laurels and just think that you are going to roll into any tournament and just because you performed well in a previous tournament that it will happen again the next week. I guess you can see from the first two tournaments (of this series) some teams that went well the first week didn't go so well the second week, so we just have to prepare very well and if we can do that then hopefully we will get the performance on the weekend."

At the Hamilton Sevens last year, the United States beat the All Blacks in the semi-finals, but were themselves then beaten by Fiji in the final.

US captain Madison Hughes is back for another crack.

"There are a lot of Fijian fans I'll tell you that were at the final last year and if you told me we were in downtown Suva or Nadi I would have believed you. It's a good event, there's a lot of enthusiasm and energy in the crowd and as a player, you love to play in front of those sort of environments, so we are looking forward to it."

His Australian counterpart is Nick Malouf.

He has high praise for Waikato Stadium.

"When it feels like the crowd is on top of you it's unreal and we have a couple of the Pacific nations in our pool, so it will be great to have their supporters there and that should really ramp up the atmosphere."

Dozens of volunteers are again helping out to make sure the tournament runs smoothly.

One of them is Chris Farrell, who is working as a team liaison officer for the Black Ferns.

There is not yet a sell-out for the two-day event, but organisers expect that to change by kick-off on Saturday morning when France takes on its neighbour Spain, in the women's tournament. 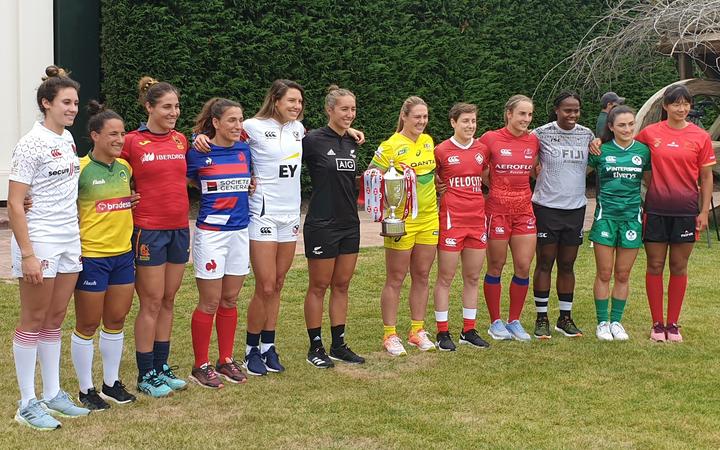 One fan, Yvonne Ennion said she loved the Sevens for the fun that went with the event and the speed and pace of each game.

"The skill level is amazing and yeah I support any of the teams, whether its Kenya to one of the lesser-known teams. It's just good to see rugby is out there to the world."

The Black Ferns go in as definite favourites to take the women's cup in Hamilton.

Captain Sarah Hirini said the team was very excited to be playing on their home turf.

"Just thinking about it gives me goosebumps ... we got to do it a little bit last year and that was incredible. The crowd was nuts, so I am sure it is going to be even better this weekend."

The Black Ferns Sevens play China, Fiji and England in their pool.

For the All Blacks Sevens, they are in pool A with Scotland, Wales and the United States.