Tim Southee says he and Black Caps coach Gary Stead are moving on. 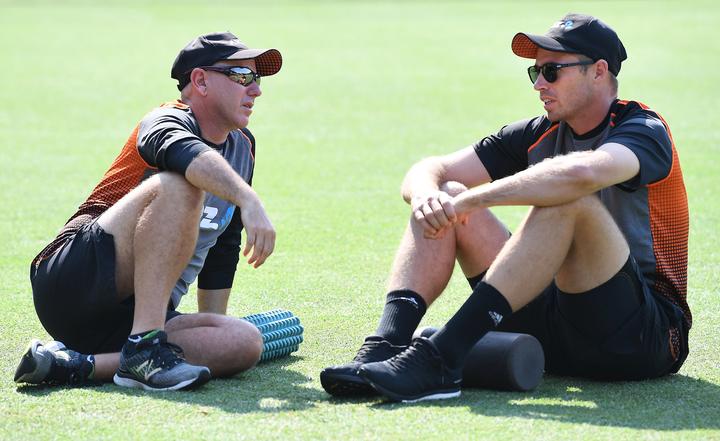 The senior seam bowler is expected to be included for the first match of a five-match T20 series against India in Auckland on Friday night.

It will be New Zealand's first match since the third of their three heavy losses during the recent Test series in Australia.

Southee, who has 270 Test wickets, was dropped for that game in Sydney because of the "heavy workload" he had shouldered, a decision which raised eyebrows with many.

The 31-year-old admitted it had been a disappointing moment but said he and Stead had smoothed things over.

"Gary and I have had a discussion, there's nothing [bad] there between us," Southee said at Black Caps training at Eden Park on Wednesday.

"We've talked about it, we probably won't agree on the decision and that's I guess what he expected.

"But yeah, we're trying to move on from it and we're moving into a different format and different series as well."

Southee and Stead were seen sitting and talking on-field before the second day's play.

But Southee said all the talking about the situation had well and truly been done, reiterating he didn't take selection calls personally.

"They make the decisions based on what they think is best for the team.

"You're going to agree to disagree and that's just the nature of sport.

"You're gutted every time you're left out. It's an absolute dream to play for New Zealand and every time you miss out it hurts but you've got to respect the decisions and try to help out and give back to the team, even when you're not playing."

Understandably, Southee was keen to now put all his focus on India's six-week stint on Kiwi soil.

The two teams will play across all three formats, starting with the first two T20s in Auckland on Friday and Sunday nights.

Southee was optimistic the New Zealand team would be able to turn their fortunes around.

"They've had tough tours before and they've bounced back and the reason why they've played for a long period of time is they've been able to get through those ups and downs."