San Francisco 49ers defeated the Green Bay Packers 37-20 to win the NFC Championship and will now play the Kansas City Chiefs in Super Bowl 54 on 2 February in Miami. 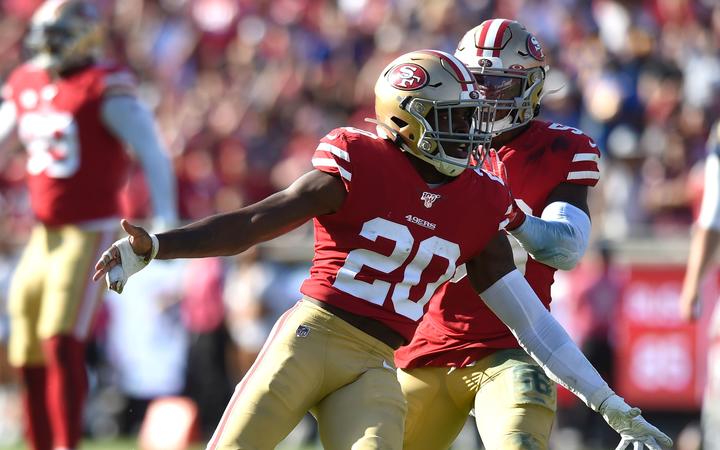 49ers are into the Superbowl. Photo: PHOTOSPORT

Raheem Mostert ran in four touchdowns as the 49ers took control, with the Packers, who trailed 27-0 at half-time, scoring two Aaron Jones touchdowns and another from Jace Sternberger.

The Chiefs beat the Tennessee Titans 35-24 in the AFC Championship game earlier on Sunday to secure a first Super Bowl appearance in 50 years.

This will be the 49ers' first Super Bowl since 2013 when they lost 34-31 to the Baltimore Ravens in New Orleans.

The 49ers have won it five times, but their last success came 25 years ago when they beat the San Diego Chargers 49-26 in Super Bowl 29, which was also held in Miami.

It has been a remarkable turnaround for Kyle Shanahan's side, who had a 4-12 record in the 2018 regular season, compared to 13-3 in this campaign.

They had thrashed Green Bay 37-8 in week 12 in November and were completely dominant in the first half against the Packers at Levi's Stadium.

Mostert's first touchdown saw him sprint in from 36 yards, before Robbie Gould's huge 54-yard field goal gave the hosts a 10-0 lead early in the second quarter.

Two further scores from Mostert - from nine and 18 yards - gave the 49ers a 27-0 lead and meant he became the first player in NFL history with 150+ rush yards and three rush touchdowns in a single half of a playoff game.

Packers quarterback Aaron Rodgers found Jones for a nine-yard touchdown early in the third, but Mostert soon ran in from 22 yards for his fourth touchdown - the most from any player in an NFC Championship match.

Jones bundled over from one yard for his second touchdown of the day for the Packers, who then missed a two-point conversion attempt when Davante Adams could not hold on.

However, Rodgers' eight-yard pass to Jace Sternberger brought the Packers to within 14 points after a 65-yard pass to Davante Adams had set up the chance.

The Packers were aiming to reach their first Super Bowl since beating the Pittsburgh Steelers 31-25 in Super Bowl 45 in February 2011 but could not do enough to complete a fightback against the 49ers, with Gould's 42-yard field goal sealing the home victory.

"I just woke up like it was any other game," said Mostert of his stellar display.

"It was just one of those games where once we all got in the groove we were like 'Hey, let's keep it riding, keep it rolling' and that's what we did."