All the top seeds for the ASB Classic tennis tournament will be on court in Auckland today as rain forces organisers to change the schedule. 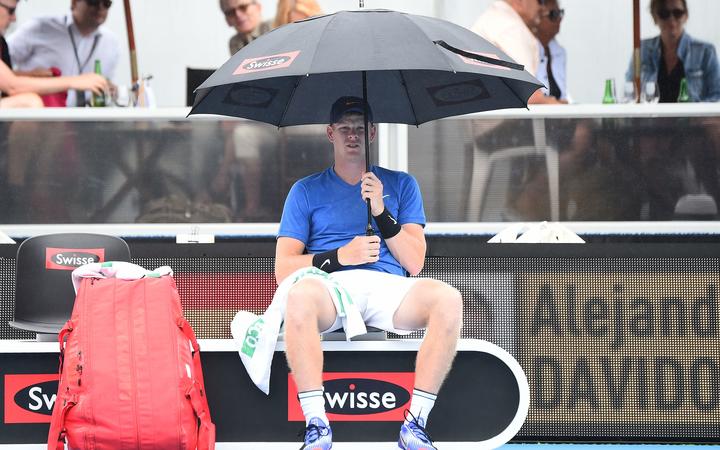 Kyle Edmund from England waits for the rain to stop during his singles match on Tuesday. Photo: PHOTOSPORT

In order to catch up, matches are scheduled on all outer courts as well as centre court at the Stanley St venue on Wednesday.

Kiwi Michael Venus will begin his doubles campaign with new partner Australian John Peers after a false start on Tuesday with the weather.

Venus enjoyed another stellar year on the doubles circuit reaching the Wimbledon semi-finals and reaching the finals of the ATP Finals in London.

Currently ranked at number 12 Fognini will take on the winner of the all Spaniards duel between Feliciano Lopez and Pablo Andujar, which is the first match scheduled on Grandstand court.

It's an all-Canadian affair to kick off the evening session with world number 14 Denis Shapovalov up against qualifier Vasek Pospisil for the first time.

Shapovalov is quickly becoming one of the rock stars of the men's game and brings plenty of firepower and flair to the court with his big serve and trademark one handed backhand.

Pospisil is on the comeback trail after undergoing back surgery.

Rounding out the evening session, third seed Karen Khachanov is looking to continue his strong start to the 2020 season after helping Russia to reach the semi-finals at the inaugural ATP Cup.

Khachanov will meet either Aussie veteran John Millman in the second of two feature matches on centre court.

With rain affecting play on Tuesday, Leonardo Mayer and Marco Cecchinato need to complete their first round match with Cecchinato leading 7(6)-6, 1-4 before rain stopped play.

They'll be followed by fifth seeded Benoit Paire will look to follow up an entertaining first round win when he faces Brazilian qualifier Thiego Monterio.

Court 5 sees some action as well with three doubles matches scheduled including Cameron Norrie and Kiwi partner Rhett Purcell taking to the court in their first-round doubles match against Rohan Bopanna and Henri Kontinen.