On the verge of becoming the first professional New Zealand cricketer to hit six sixes in an over, Canterbury Kings batsman Leo Carter's only thought was about the boy he hit with his fifth six. 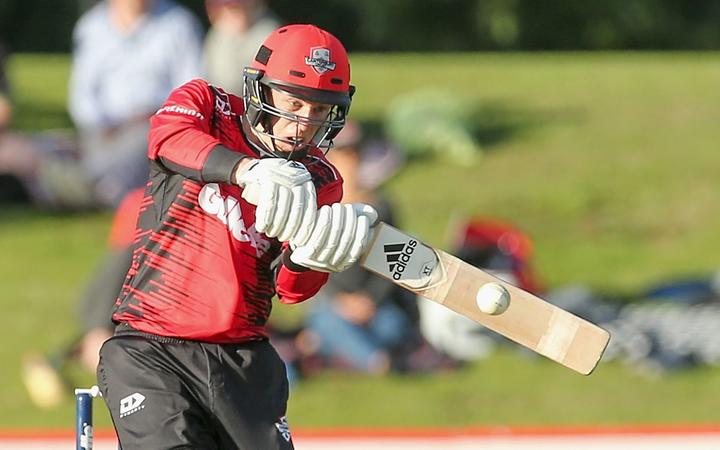 Despite his concern, he went on to achieve the feat, becoming just the seventh cricketer in history to hit six sixes in an over at a top domestic level or higher.

Carter, 25, did it during Canterbury's Super Smash Twenty20 match against Northern Districts at Hagley Oval on Sunday.

The left-handed batsmen smashed all of the 36 runs over leg-side off the bowling of spinner Anton Devcich in the 16th over.

He finished the match unbeaten on 70 off 29 balls as the hosts chased down Northern Districts' 220-run total with seven balls to spare.

Carter told RNZ Summer Times the over developed very organically for him.

"It was pretty cool," he humbly said.

"When I hit the fifth one it actually hit a little boy in the crowd so I was actually pretty concerned about him, I was trying to call out for physio (to check on the boy)... so yea I wasn't really thinking about it.

"The six balls sort of come along quite quickly, but yea I was just more thinking we need a big over and yea it just sort of happened really... it was pretty funny how it all worked out."

Carter said he felt for Devcich, who joined the unwanted club of bowlers to be hit for 36-runs in a single over.

"It's a bit of a batters game at times, yea it's a tough one as a bowler.

"It was a pretty short boundary over that side (leg side) so yea he definitely had a few things against him, but he's a pretty experienced bowler, so (a) pretty good bowler actually to get them off against, but yea (I'll) certainly take it."

Leo Carter hit 6 sixes in a row and the @CanterburyCrick Kings have pulled off the huge chase of 220 with 7 balls to spare at Hagley Oval!