Any hopes the Black Caps had that the New Year would bring a change of fortune on their tour of Australia were shattered yesterday and today could prove equally unpleasant in Sydney. 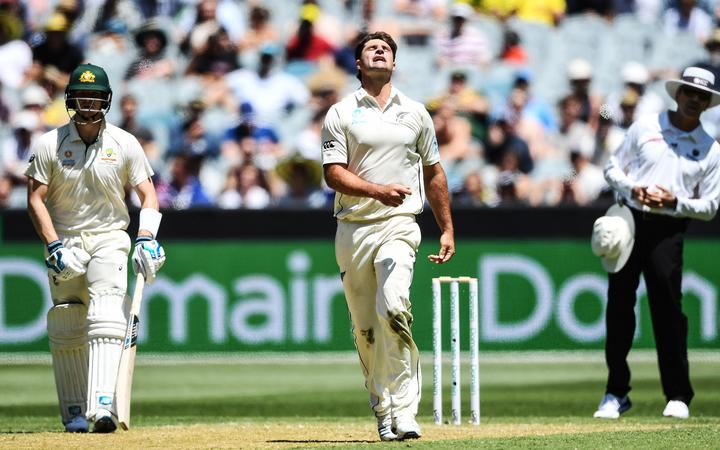 New Zealand were belted on day one as a combination of illness, a lost toss, some questionable selections and brilliant batting from their hosts put Australia in control.

The hosts will resume on day two in the third and final test, a match the Black Caps must at least draw to avoid a 3-0 series sweep, on 283 for three with centurion Marnus Labuschagne still at the crease.

The first blow did not come entirely out of the blue with captain Kane Williamson and batsman Henry Nicholls having missed training on the previous two days with a flu bug that was sweeping through the squad.

Spinner Mitchell Santner joined them in the sick bay on Thursday and while he was ruled out altogether on Friday, Williamson and Nicholls were allowed a net to test their fitness.

"You could see pretty quickly that they weren't right. Both those guys have been tough competitors and tough people," said coach Gary Stead.

"And when you don't get an argument back around whether you should play or not, you know they are not very well."

The bug led to three changes to the team that lost heavily in Melbourne last weekend with batsman Glenn Phillips, who was flown over as cover on Thursday, handed his first cap.

A fourth change was forced by the injury suffered by paceman Trent Boult in the second test, but the fifth and last was the unexpected decision to drop experienced quick Tim Southee in favour of Matt Henry.

"We just felt we wanted a bit more pace out there with what Matt offers over Tim," Stead added.

"The workload that Tim's had, not just in the last two tests, but you put the last four together it's somewhere around about 200 overs in a short period of time. We felt that Matt would have given us a point of difference."

Southee and Henry could have both played, had New Zealand not elected to reduce their pace attack by one to make room for twin spinners Todd Astle and Will Sommervile on what they thought would be a dry wicket.

That decision looked all the more questionable once stand-in captain Tom Latham had lost the toss.

"We make decisions on what is in front of us and what are the best decisions to make at the time," Stead said of the three-man selection panel. "We live and die by those as well."