Mooar, who was an assistant at the Crusaders this year, is understood to be one of Foster's assistants, alongside current Hurricanes head coach John Plumtree, former All Blacks and Ireland scrum coach Greg Feek and current All Blacks defence coach Scott McLeod.

The Wales Online news site reports that Scarlets have started a search for a new coach "after becoming resigned to losing Mooar to the All Blacks".

Liverpool out of League Cup

Aston Villa beat Liverpool's youngest-ever side 5-0 with a double by Jonathan Kodjia helping them into the English League Cup semi-finals on a strange night at Villa Park.

With Premier League leaders Liverpool playing in FIFA's Club World Cup 24 hours later in Doha, they fielded a starting lineup consisting mainly of reserves and youth team players with an average age of 19.4, a club record.

Despite their inexperience Liverpool's youngsters acquitted themselves well and matched a Villa side, showing 10 changes from their weekend Premier League defeat by Sheffield United, for much of a game that did not reflect well on the League Cup.

Liverpool's senior players and manager Juergen Klopp, watching on TV in Qatar, would have been impressed with the way they started with 16-year-old Harvey Elliott catching the eye.

It will be the first time in 20 years the event has been held in the region.

Athletics New Zealand Chief Executive Peter Pfitzinger said the event is one of New Zealand's oldest sporting competitions with over 100 years of history and provides a great opportunity for spectators to witness elite level athletics.

"The last time the New Zealand Track & Field Championships were hosted in the Hawke's Bay, Nick Willis and Dame Valerie Adams were young, emerging athletes and we included Para Athletics events for the first time," said Pfitzinger "The event is a true stepping-stone for our future champions and it's important that it's hosted in different parts of the country, so young athletes and spectators have an opportunity to share in the excitement."

The 17 year old was seventh after the first run, but a few mistakes slipped her down after the second run.

She finished less than a second behind the winner Federica Brignone of Italy.

"It was a tough, tight race," explains Alice. "I was fast in the first run until a small mistake cost me a bit of time. I really wanted to ski my best in the second run and charge, and I felt like I did that. Unfortunately, it wasn't the fast run that I thought, and I was a bit too aggressive for the snow surface and it slowed me down.

"The girls' GS is very stacked at the moment so you have to be attacking and executing to be in there. But a top 10 is a solid result and I'm looking forward to the rest of the season."

World number one Mikaela Shiffrin of the United States was well off the pace in today's race. First racer out of the gate she was placed 19th after run one, 1.33s off the pace and finished 17th overall.

Fellow New Zealander Piera Hudson did not qualify for her second run, finishing outside the top 30 in 54th.

Robinson is now sixth in the giant slalom standings.

Australians have swept the ICC women's cricketer of the year awards.

Perry's compatriot, wicketkeeper Alyssa Healy, was the top Twenty20 cricketer for a second straight year while Australia captain Meg Lanning was named skipper of the ICC's 50-overs and T20 teams of the year.

No New Zealanders made either the ODI or T20 teams of the year.

It has been confirmed that the Black Caps will play Scotland twice in June next year.

It was announced in September that the Black Caps would travel to Scotland for the first time since 2008.

However, rather than playing a solitary one-day international, they will now place twice - a T20 international on 10 June and an ODI two days later.

Scotland will then play an ODI with Australia at the end of June, with all three games at The Grange.

Two New Zealand sailors are in the top three after two days racing at the Finn World Championships in Melbourne. 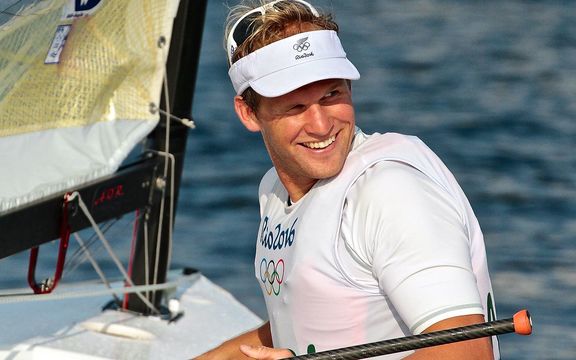 Josh Junior leads the regatta after a fifth and a first place in the day's two races.

The scoreboard will shuffle a little after the next race when the discard for each sailor's worst result comes into play.

There are still eight races scheduled, including Saturday's medal race.

Howley apologises for betting on rugby

Former Wales backs coach Rob Howley has apologised for breaching betting rules as he "battled demons" in the wake of his sister's death.

Yesterday the 49-year-old was banned from rugby for 18 months, with nine suspended, for placing bets on more than 1,000 matches over four years.

Howley said in a statement: "I would like to take this opportunity to apologise to all those close to me and everyone this has affected, especially the rugby community, close colleagues and above all my family."

An independent Welsh Rugby Union disciplinary panel found Howley had made 363 bets covering 1,163 matches over four years, including some on Wales that included first try scorers.

The death of Howley's sister Karen in 2011 was identified as a trigger for his betting activity by the disciplinary committee.

"I am an extremely private man, and unfortunately it was this that kept me silent as I battled my demons following my sister's tragic death," Howley said.

"The last few months have been immensely tough, and continued help will allow me to find the right path back to rugby, which has always been my true passion.

The New Zealand Supercars driver Shane van Gisbergen will race a Lexus in next month's Daytona 24 hour race in Florida.

Van Gisbergen has raced the event four times before with his best finish a second in a Porsche in 2015.

The 30 year-old commented: "It's an exciting opportunity for me to race again at the Rolex 24 at Daytona. I've missed the American style of racing, so when the phone rang it didn't take long for me to say 'Yes.'

Japan's Sunwolves have added two former Springboks to their squad for their final Super Rugby season next year.

Both JJ Engelbrecht and Rudy Paige, 30 year-olds who each played 13 tests for South Africa, have signed for the 2020 season, which is set to be the last for the franchise in Super Rugby.

They join from Clermont Auvergne in France, where they had brief contracts as World Cup cover.

Centre Engelbrecht previously competed for the Stormers and Bulls in Super Rugby and had a spell in Wales with the Ospreys.

Scrumhalf Paige previously played Super Rugby for the Bulls and in the PRO14 for the Cheetahs.

The Sunwolves have also added tighthead prop Conraad van Vuuren from the Bulls as well as lock Michael Stolberg and backrower Corey Thomas from Australia.

The Tokyo-based Sunwolves will be cut from Super Rugby after next season, when the competition reverts to a purely southern hemisphere affair of 14 teams in a round-robin format.

Italian MotoGP rider Andrea Iannone has been provisionally suspended after testing positive for a banned substance.

It said a urine sample provided by the Aprilia rider at the Malaysian Grand Prix on Nov. 3 had shown an "adverse analytical finding of a non-specified substance under Section 1.1.a) Exogenous Anabolic Androgenic Steroids."

Iannone, the winner of the 2016 Austrian Grand Prix, can request the analysis of his B sample, and he can be present when it is investigated.

The suspension puts Iannone's MotoGP future in doubt, with his contract with Aprilia running until the end of the 2020 season.

Springbok captain Siya Kolisi and flanker Pieter-Steph Du Toit have signed two-year contract extensions with South African Super Rugby side the Stormers, two of a number of World Cup winners to commit their futures to the team.

Kolisi and reigning World Rugby Player of the Year Du Toit will be the headline acts for the team in 2020, with lock Eben Etzebeth and centre Damian de Allende having departed for France and Japan respectively.

Fellow Boks Steven Kitshoff and Frans Malherbe, both props, hooker Bongi Mbonambi and flyhalf Damian Willemse have signed new deals until the end of the 2021 season.

Hooker Scarra Ntubeni and utility back Dillyn Leyds, who both played for the Boks in 2019, also penned contracts for the next two years.

Members of the Japan team who won the 2011 women's football World Cup will start the Japan leg of the Tokyo 2020 Olympic torch relay.

More details of the route were revealed along with the approximately 10,000 people who will carry the Olympic flame as it tours all Japan's 47 prefectures ahead of the Games opening ceremony in July.

The team hold a special place in the hearts of the Japanese people because their World Cup victory in Germany came months after the devastating 2011 tsunami and earthquake.

The Olympic flame is scheduled to be lit, as per tradition, in Greece on March 12 before arriving in Japan, at Matsushima Airbase in Miyagi prefecture, on March 20.