Jesse Sapolu grew up in Apia throwing around a rugby ball but a move to America as a young boy changed the course of his life. 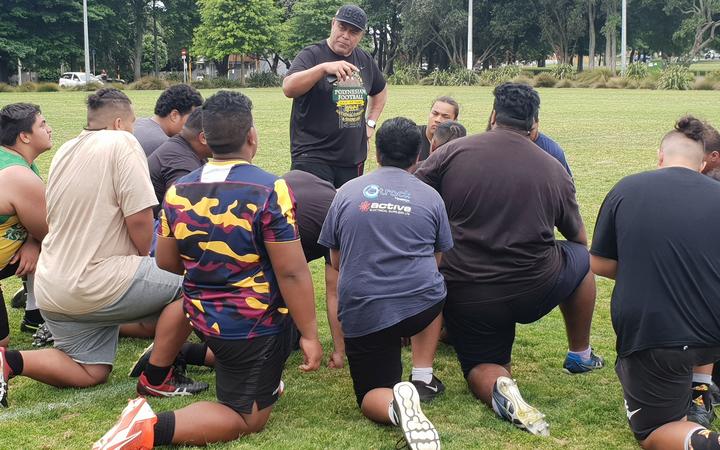 After 15 years in the NFL, and four Super Bowl rings later, the former offensive linemen knows what it takes to excel in American football.

Sapolu said he came to Auckland to encourage more people, with a similar background to his own, so they could have the same opportunity.

Sapolu founded the Polynesian Football Hall of Fame to help recognise the contribution to American football that Polynesians had made.

"We're [Polynesians are] starting to be well-known in America, how we are strong athletes but we are very humble and respectful and a lot of that comes from the foundation of who we are as Polynesian people.

"The respect is naturally there and American coaches love that because they don't have to teach the respect part of it. Our Polynesian kids walk softly but when they put them on the field it's a different story."

However, Sapolu said he was not just on the hunt for Polynesian talent he was interested in New Zealand players.

In 1984, Mark Nua was one of the first two New Zealanders to win an American Football scholarship in the United States and he went on to play in the NFL with the San Diego Chargers.

Like Sapolu, Nua is a graduate for the University of Hawaii, and said he believed more young New Zealanders had the attributes to follow in his footsteps.

"I think they're probably a little bit more athletic than my generation. Size-wise it is all comparable, back when I was their age kids my size were 1 in 1000 whereas now it's 1 in 100," Nua said.

"These kids can see there's pathways there, that's all we are here to do is encourage, take that pathway if it is there."

But it was not just teenage boys who took advantage of the coaching clinic. 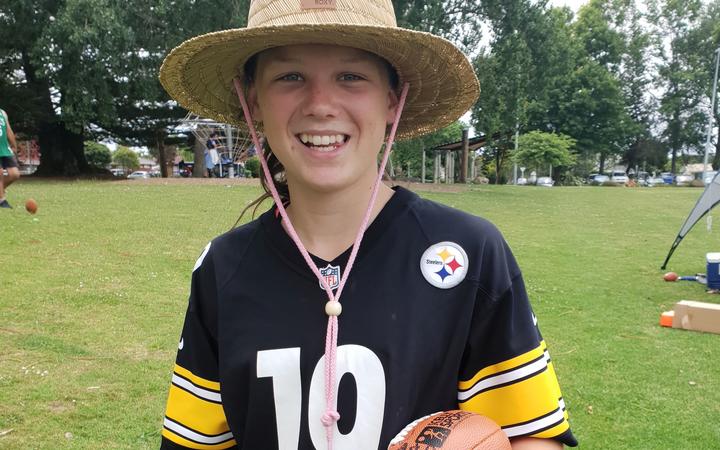 Twelve-year-old Gracie Owen had travelled over from Paeroa with her mum, eager to improve her football skills and to also get a photo with a Super Bowl champion.

"We played a few football games, did some throwing and catching and they taught me some good skills on how to throw it better," Gracie said.

"I mostly just wanted to have fun with all the other kids and get a little bit better at football and mostly just to meet Jesse."

For Sapolu getting recognised by another generation of fans brought some amusement.

"Sometimes I chuckle a little bit ... thank God for the internet, they can Google my name and see what I've done because a lot of these kids weren't born when I was playing, but it doesn't matter as far as I use my influence to give them opportunities that is all that matters," Sapolu said.

American football has been in New Zealand since the early 1980s when the first clubs were formed in Auckland.

New Zealand American Football Federation chairman Todd Wackrow said getting young people and their parents on board with the sport was important.

He said coaching clinics like the one Sapolu ran brought more visibility to the sport and gave the federation another chance to test their current players against the standards players were expected to reach in America.

However, Wackrow said building American Football in New Zealand was not easy. 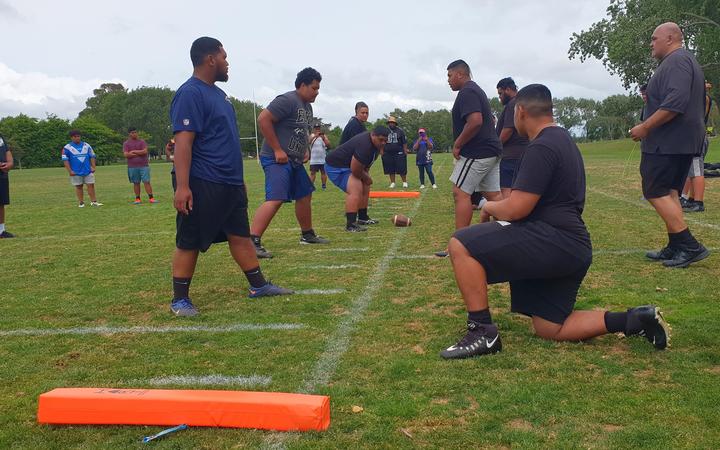 "I think a lot of people just to the casual view will see the pads and the big hits and think it is just a bit of a vicious game but for people that get into play there is an incredible amount of strategy both at an individual position point of view but also as a team," Wackrow said.

"The costs to play are huge, to get kitted out in gear to play contact football you're not getting much change from seven or eight hundred dollars and especially with a lot of our communities and families playing that's a heap of money so that's a massive challenge."

Despite the challenges players from this side of the world face, with two former NFL players in Sapolu and Nua keeping an eye on how talent is progressing, there could still be another young man from New Zealand making his way in American football in years to come.