Newly crowned national secondary school's sprint champion Edward Osei-Nketia is accustomed to winning on his own, but the mateship of team sport is still alluring. 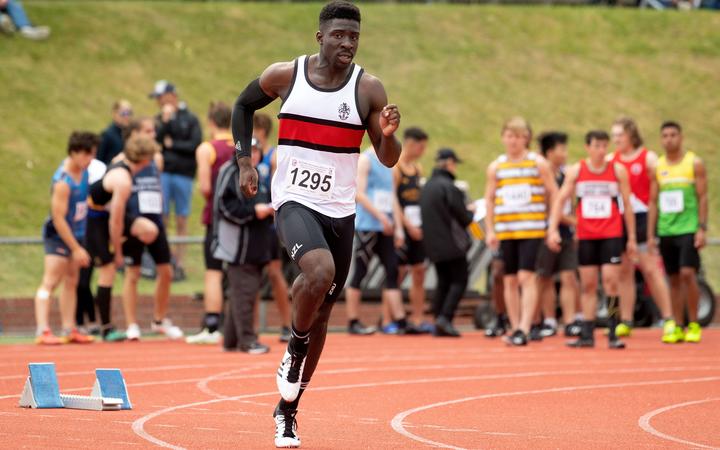 Edward Osei-Nketia is a national sprint star who could one day be a rugby star. Photo: Photosport

Despite his growing list of individual accolades on the track, the teenager craves the camaraderie of teammates.

Osei-Nketia secured his first title win at the New Zealand Secondary Schools Athletic Championships in Wellington on December 8, where he won the senior boys 100m final in 10.97 seconds.

He was already the senior men's champion in both New Zealand and Australia and ran at the IAAF World Championships earlier this year, but after the secondary school championships the 18-year-old representing Scots College spoke glowingly of the competitors in another sport he has been trying out this year.

Osei-Nketia joined a training camp run by New Zealand Rugby for potential sevens players in Auckland in November and the brotherhood of the team environment left a lasting impact on the sprinter who has considered a switch of sports.

"The one thing I enjoy about sevens is that it is a team effort, not like you are all by yourself ... you are socialising with people, meeting different people each time and learning new characters of each player," he said.

Getting the ball in his hands and running in tries also appeals to the speedster.

The son of New Zealand's fastest man admitted last year he did not expect to make the athletics world championships and was instead looking to make a national under-18 rugby team in New Zealand or Australia.

However, before he can fulfill his potential on the rugby field Osei-Nketia wants to kick his father Gus Nketia out of the athletics record books.

"That record will be 26 years-old next year and that record needs to go," Osei-Nketia said.

Osei-Nketia is looking towards next year's Olympics on the track but last month said he would consider attempting to represent New Zealand in both the 100m and rugby sevens at the 2024 Olympic Games.